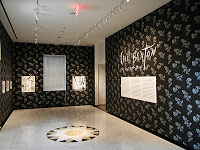 JTF (just the facts): A total of 96 photographs, variously framed and matted, and hung against wallpapered and white walls in the entry area and a large gallery space with several interior dividers. The prints are a mix of gelatin silver, bromide and pigment ink prints, taken between 1924 and 1970, although most were taken in the 1930s. No physical dimensions or edition information was available. The exhibit also includes 27 watercolor/ink sketches and drawings, 6 full body costumes, 1 video, and 16 glass cases containing magazines, books, letters, contact sheets, programs, and other related ephemera. A catalog of the exhibition has been published by Skira Rizzoli (here) and is available from the book shop for $65. (Installation shots at right.) 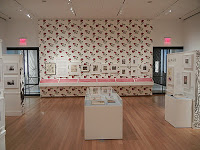 Comments/Context: While there is certainly plenty of photography on display at the new Cecil Beaton show at the MCNY, I’m not sure it makes sense to call it a photography show in the narrow sense of the definition. Instead of limiting the scope to just his photographs, this flashy exhibit broadens out to tell the story of an artistic Renaissance man, society gadabout, and relentless self-promoter, including watercolor sketches of award-winning costume designs he made for Broadway shows, movies, and the opera, published volumes of his journals, and even his own wallpaper designs. These artistic threads are then woven together with his celebrity and society portraits (seemingly just as often of himself as of famous people) and his fashion work for Vogue, tying it all together in a sumptuous and elegant package. 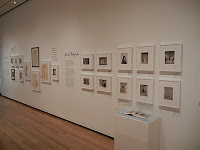 As a photographer, Beaton was essentially a classicist. While his compositions show borrowings and sprinklings from the avant-garde and Surrealism, he returned again and again to overtly staged interior scenes, heavy on theatricality and dramatic romance. It didn’t matter if it was Greta Garbo, Mona Williams, Audrey Hepburn, or Marilyn Monroe, Beaton brought a refined sense of glamour to his portraits and commissions, following in the footsteps of De Meyer and adding a touch of more modern panache and sophistication. While he may not have been a wildly inventive visual innovator with his camera, the aura of his personality clearly became part of his productions, adding sparkle and excitement to mix. 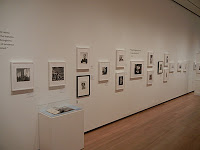 This is a show brimming with visual stimuli, which in a way distracts from its ability to make an intimate or compelling case for the quality of the photographs. But the “going in all different directions” feel of this installation is tremendously effective in painting a picture of Beaton as a frenetic man about town, a multi-talented artist working a dozen projects at once while jamming in a few society portraits between cocktails. It’s not so much “Beaton the photographer” as it is “Beaton the force of nature”, whirling through New York in a tuxedo, hobnobbing with celebrities and society dames, multiplying the vibrancy of the artistic community with more than just his camera.

Collector’s POV: Given this is a museum show, there are, of course, no posted prices. Beaton’s photographs are generally available in the secondary markets, with a decent number of prints coming up for sale each year. Recent prices have ranged from $500 to roughly $8000, mostly correlated to the fame of the sitter. Similarly, I’m sure there are Beaton images of now-unknown society figures that can be had for even less. 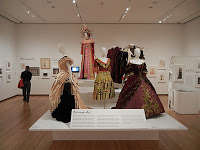 Read more about: Cecil Beaton, Museum of the City of New York (MCNY)