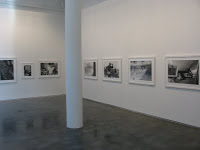 JTF (just the facts): A total of 44 photographs, framed in white and matted, and hung in the front room, the hallway, and the larger back gallery. (Marginal installation shots at right.) The show is divided into six separate bodies of work. Except for the images from Subway, all of the prints are modern prints, many significantly enlarged from the original size: Comments/Context: In addition to the East 100th Street MoMA show recreation at Greenberg and the massive, three-volume catalog from Steidl (both linked below), Bruce Davidson also has a mini-retrospective show on view at Bryce Wolkowitz. For those, like ourselves, who aren’t as deeply familiar with all of Davidson’s projects over the years, this exhibit is an effective way to see the whole span of his artistic career. It gathers a group of images from each of his major series, selecting both iconic images and lesser known works, providing a sampler of his overall output across the decades.

Prior to this show, I have to admit that my shorthand summary for Davidson has always been “East 100th Street and other documentary work”. What I think this exhibit did for me was to connect the dots a bit better on his other projects. While I certainly recognized the circus dwarfs, Freedom Riders (especially the boy with VOTE painted on his forehead), Brooklyn gang members (particularly the stick ball game in the street), and the fragmented color shots from the subway, this show helped to put them into a larger and broader context, seeing connections between the disparate threads. In contrast, Davidson’s images from 1960’s Los Angeles were completely new to me, and in many ways, I found them the most striking and exciting; I liked their dry, ironic humor – posing at muscle beach, the view out an airplane window, a man at a drive-through, parked cars densely packed at the beach, the back of the Hollywood sign. Coming out of the show, I’d like to think that my understanding of Davidson’s work is much more comprehensive, and East 100th Street stands out a bit less in my personal rating of his various projects.

As an aside, in my opinion, the large 30×40 prints of the older negatives aren’t hugely successful and are a bit distracting as result. In many cases, the prints are extremely grainy (several of the Circus images in particular); they just can’t support the enlargement being asked of them. In other cases, I think the intimacy and subtlety of the works are somewhat compromised when the pictures are so big. Only the Los Angeles images seemed to be effective at the larger size, as they depict more outsized craziness.

That said, this is an impressive show of Davidson’s long career, with many standout images that deserve to be remembered.

Collector’s POV: All of the modern gelatin silver prints are priced on the same scale: 11×14 at $4000, 16×20 at $5000, 20×24 at $8000, and 30×40 at $15000, regardless of which project the negative came from. The dye transfers range between $6500 and 9500. As I mentioned in our Greenberg review, Davidson’s work has been thinly traded in the secondary markets in the past few years, with very few of his best vintage images coming up for sale; with that caveat, the recent price range of $2000 to $8000 at auction may or may not be particularly relevant when considering the appropriate prices for his work. 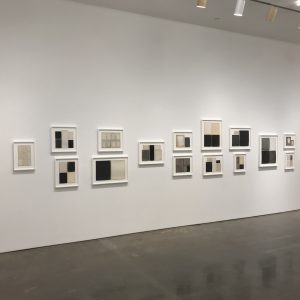 JTF (just the facts): A total of 46 black and white photographic works, framed in white and unmatted, and hung against white and grey walls in the East and West ... Read on.