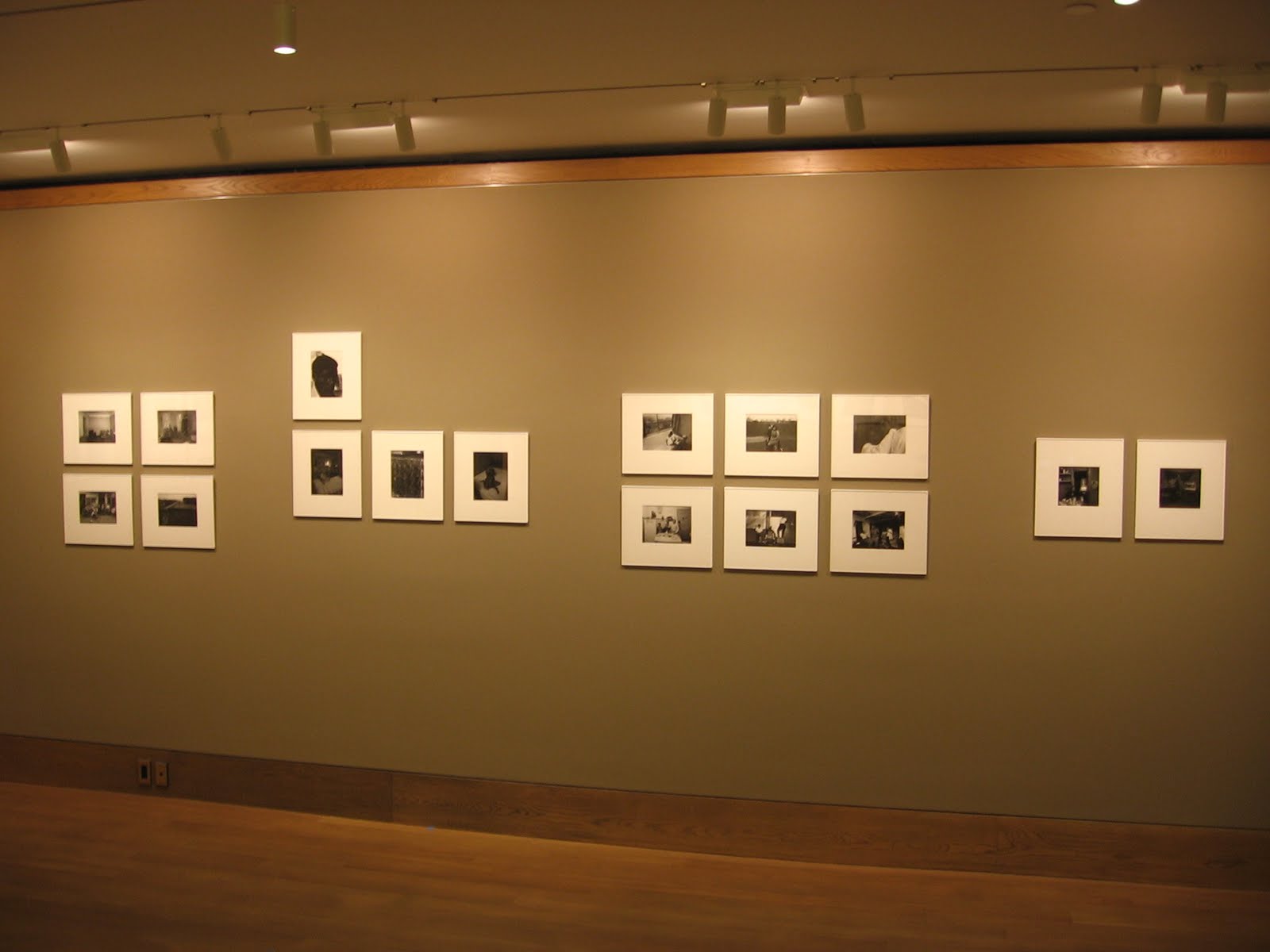 JTF (just the facts): A total of 43 black and white images, framed and matted in extremely thin white frames with very little depth, and hung in groups against light brown walls in the main gallery space. All of the images were taken in 1967 and 1968 and are vintage 8×10 (or reverse) gelatin silver prints. The works have been installed as a historically accurate recreation of the 1970 show at the MoMA; installation photographs from the original exhibit (found in the price list booklet) show that the prints have been hung in the same manner (subject to the constraints of this particular space). (Installation shots at right.)

In addition to the prints in the main gallery, there are a variety of other ancillary mini-exhibits also on view. In the book alcove, there are 16 images from the expanded version of East 100th Street; these are works that did not appear in the MoMA exhibit. They are 11×14 modern prints, framed and matted in thicker white frames, and hung against cream colored walls. A glass case also holds a sample of vintage books.

The first viewing room holds a total of 11 platinum prints of Central Park, made by Davidson in the 1990s and printed in 2008. The works are either 5×12 or 6×10 and are framed and matted in black.

The second viewing room has a total of 6 vintage images from Davidson’s series on Brooklyn gangs from the 1950s. Most of the images are approximately 13×9 (or reverse) and are framed and matted in black.

And finally, in the back room near Greenberg’s office, there is a small selection of 6 vintage images by Man Ray: 2 rayographs, 2 nudes and 2 portraits (Picasso and Cocteau). The works are from the 1920s and 1930s and are variously framed and matted. Comments/Context: Since its publication in 1970, Bruce Davidson’s East 100th Street has been a controversial body of work. Many have hailed it as a classic of social documentary photography, while others have criticized it as particularly exploitative. This exhibit is a kind of time machine, taking us back to the show of these images at the MoMA, as curated by John Szarkowski; the sequencing and grouping, even the frames are for the most part exactly the same. Of course, it is impossible to also transport our minds back nearly 40 years and react to the images in the same polarized way visitors did back then. All we can do is see them through the lens of the present, a kind of revisionist history of the resonance of the pictures and how well they have aged.
.
Almost all of the images in this show are “environmental” portraits; images of individuals, pairs or groups of people/extended families in their bedrooms and kitchens, on their front stoops and fire escapes, sitting on couches or standing on the street. What is striking about these pictures is the consistency of the knowing looks on the sitters’ faces: every single subject knows exactly what is going on, and is posing in one way or another. When allowed to create their own personas in collaboration with the photographer, a mix of hiding and showing goes on; some are vulnerable and exhausted by their poverty and daily struggles, others are more defiant and proud amid the challenging circumstances, still others are simply in love. And while there is plenty of quiet tenderness in these images, I found it hard not to see the awkward tension in each room. While Davidson was clearly successful in developing bonds of trust with his sitters, an undercurrent of subtle reluctance seems to percolate up in many of these “private moments”.
.
In many ways, I think the electricity of these images has been muted a bit over the years; as viewers, we have unfortunately become accustomed (some might say numbed) to images of urban poverty and persistent decay, and their effects on the lives of otherwise good people. Looking back, even with the anxiety of the unlikely artistic collaboration as a foundation, the images seem less taut now then they likely did in 1970. Perhaps this is good, as the mellowing with age has allowed the sympathy and authentic humanity in the pictures to come through more fully. Even if they are a bit posed, these images still offer plenty of touching moments found among the hard realities of urban life. Seeing how Szarkowski edited and displayed Davidson’s work is an interesting sidelight to this exhibit. The images in the book alcove didn’t make Szarkowski’s show, so there is a contrast set up, an “in” and “out” dynamic that is intriguing. Szarkowski clearly gravitated toward Davidson’s interior relatively up-close portraits; his show is nearly all examples of this genre, while many of the additional images are pictures Davidson took in the street, of buildings, and of people from a distance, setting the scene. Szarkowski also avoided a simple “all in a line” hanging for the prints; there are groups, grids, pairs, and uneven out of line images that break the monotony, all carefully selected to work together or in juxtaposition. Seeing his unconventional hanging of this work was a good reminder of just how much difference attention to these details can make in telling the story of a body of work.
.
Collector’s POV: All 43 vintage images in the main exhibit are being sold as a single unit/installation; the price was “on request” and I didn’t ask. The modern prints in the book alcove are priced at $4000 each, the platinum prints of Central Park are $5500 each, and the vintage Brooklyn gang works are either $20000 or $25000 each. All of the Man Ray images are “price on request”.
Given Davidson’s long career, his work is surprisingly absent from the secondary markets. While there are a handful of prints available in any given year, they have not been particularly representative of his best work; often they are later prints or secondary images (or even first edition books). Prices have ranged between $2000 and $8000 in the past few years, but I’m not sure this range is a great guide to what his most notable images would/should sell for.
Rating: * (one star) GOOD (rating system described here)
Transit Hub:
Bruce Davidson: East 100th Street: The MoMA Show as Curated by John Szarkowski in 1970
Through January 2nd
Howard Greenberg Gallery
41 East 57th Street
New York, NY 10022
Twitter| Facebook|