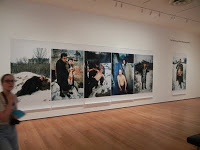 JTF (just the facts): A total of 19 large scale photographs, unframed and pinned directly to the wall, and hung in a single room space on the 3rd floor (the normal divider wall has been removed). While exact dimensions were not available, the prints are larger than life size and have additional white strips at the top and bottom. The images were made between 1996 and 1997 as part of a much larger series, and a monograph of this body of work was published by Scalo in 1999. The exhibit was curated by Eva Respini. (Installation shots at right.)

Comments/Context:  Boris Mikhailov’s photographs of homeless people in Kharkov, Ukraine, in the aftermath of the post-Soviet collapse are tough, often disturbing images. Taken in the late 1990s, the images depict worn down men and weary women as they stand in the snow in dirty winter overcoats or huddle in forgotten grubby parklands, often exposing their naked sagging flesh with bored indifference or a twinkle of wry complicity. The images are a sad parade of down trodden vulnerability, punctuated by black eyes, skin welts, dirty toilets and explicit flashing. 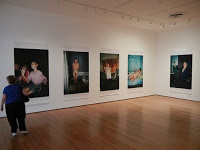 What’s different about Mikhailov’s portraits is just how involved he is with the sitters; it’s almost as if he’s in the frame himself. While the pictures have the patina of documents (the interiors often flash lit), there is plenty of mannered posing and collaboration going on here, which absolutely crosses the line into performance, voyeurism and exploitation. In many of the portraits, the sitters seem to treat the exercise like a joke or a lark, as if this one last humiliation of pulling down their pants or vamping with a dead fish is no worse than whatever else has come before. There is a palpable sense of theater in the works, as if allegorical stories are being played out by these unlikely actors.

Compositionally, several of the images reference Christian iconography or art historical precedents, adding a layer of painterly control to seemingly loose snapshots. A man in a snowy coat stands with outstretched arms as though on the cross, while another slumps shirtless in a classic pieta. Given the size of the prints, I was 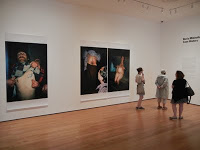 often drawn to connections to classic paintings of portraits and nudes across the ages, and then roughly ripped back to reality by the dingy grime or abject craziness of the settings and lives on display. A bearded man pretends to sleep in the snow with a rock as his pillow, with the fallen glory of a hulking mansion in the background; he seems like the perfect symbol for the new world order. Another wields an ax while wearing an old army uniform; it could easily be a portrait of a former general or hero, and yet, it’s clear that unbalanced delusion is really at work.

This exhibit had me torn, in that I found several of the images to be mesmerizing and spectacular, while plenty of others left me cold or just unmoved by their blunt staginess. This isn’t an easy show to like, but one that I think is worth the investment of time to read carefully. 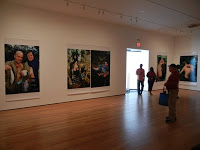 Collector’s POV: As this is a museum show, there are of course no posted prices. Mikhailov’s work has only been intermittently available in the secondary markets in recent years; prices have ranged between roughly $3000 and $30000, but the number of lots available has been small. As a result, gallery retail may still be the best option for those collectors interested in his work. Mikhailov is represented by Pace/MacGill Gallery in New York (here) and Galerie Barbara Weiss in Berlin (here).

As an aside, after I had spent some time with this show, I stood and watched the stream of casual visitors as they entered the gallery, to see how they reacted when they were confronted by the images on display. A meaningful number had an aghast reaction and decided that they didn’t need to see any more, quickly making a detour or reversing course. For the random tourist taking in a sampler of artistic delights at the museum, this exhibit was clearly a splash of cold water, and one which many just didn’t have the stomach to engage with.
.
Rating: ** (two stars) VERY GOOD (rating system described here)