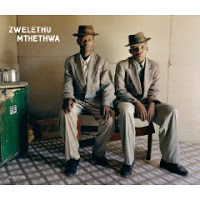 JTF (just the facts): Published in 2010 by Aperture (here). 120 pages, with 69 color and 9 black and white images. Includes an interview by Isolde Brielmaier, an essay by Okwui Enwezor, and a short biography. (Cover shot at right, via Amazon.)

This monograph contains images from the following photographic projects/series:

Comments/Context: After seeing South African photographer Zwelethu Mthethwa’s show last year (linked below), as we often do, we went looking for more information to gain a better understanding of his entire body of work. Unfortunately, at the time, there were few good web resources on him, only a handful of broader surveys of African contemporary photography, and no decent monographs that we could easily consult. Happily, this situation has recently been resolved by the release of this fine collection of Mthethwa’s work from the past decade.

What I find exciting and original about Mthethwa’s approach to capturing the post-apartheid world of South Africa is that unlike David Goldblatt’s superlative images that are indelibly rooted in the nuanced history of the land, Mthethwa’s pictures contemplate the realities of the immediate present, in a manner that forgoes a heavy-handed anthropological or documentary dissection, and instead employs a more intimate and humanist touch. All of the pictures in this book are portraits (even when they depict empty spaces); they tell stories of specific individual lives, wrapped in immense daily challenges, all in the context of larger forces that are often beyond their control.

I think the two strongest bodies of work in this book are the early Interiors and the workers from Sugar Cane, but all of the images included find that delicate balance of pride and humility in the face of a wide range of difficult circumstances. Whether the people are digging in the red dust of a quartz mine, pounding on the rubble of bricks, posing against a mountainous wall of coal sacks, scavenging on rubbish heaps, or chopping down sugar cane with machetes, when they stop for a moment to face the camera, we see the complex mix of defiance, weariness, and strength of spirit that drives them to get by using whatever means necessary. The Sugar Cane portraits are the most successful of these worker images because they combine the inherent contrast of the verdant green hills, the texture of the rough stalks, and the vastness of the manual labor required to bring in the crop, with the alternating determination and indifference on the faces of the machete wielding subjects. The tension is what makes the pictures resonate.

The interior images of worker settlements, shantytowns, and hostels on the outskirts of the big cities use the creation of personal space as a metaphor for the defense of human dignity. Regardless of the cardboard walls, corrugated tin roofs, or compacted dirt floors, these cramped spaces have been transformed into representations of the personalities of their inhabitants. In some rooms, newspapers and magazines cover ever inch of the wall space, creating chaotic clashing patterns of color. In others, the setting is more spare, with only a few pieces of improvised furniture or personal belongings, set against walls painted a uniform color, the bed neatly made. And yet when photographed within their own environments, the subjects seem to find themselves, and tell their proud stories of life in the present, opening up their vulnerabilities and sacrifices, and looking ahead with remarkable optimism.

Part of the power of these pictures comes from their deft use of color (as is ably pointed out in the excellent essay by Okwui Enwezor). The contrasts of bright color bring life and personality to these images; were they to be executed in black and white, the same scenes would likely seem quite a bit more negative or depressing (especially given the predominance of deadpan expressions). Somehow, the colors seem thicker and more lush than usual: the rich pink of a floral linoleum, the soft light blue of a painted wall, the electric green of a patterned wall paper, the bright red of a dirty work shirt, or the neon orange of a pair of rubber gloves. Taken together, they plant us firmly in the present, settled into the rhythms of modern South African life.

Aperture has got the timing of this book just right – Mthethwa has developed a strong and deep portfolio of work in the past decade, and this monograph has come along at precisely the right moment to expose it (with appropriate scholarship and editing) to a much wider audience.

Collector’s POV: Zwelethu Mthethwa is represented by Jack Shainman Gallery in New York (here); a show of recent work was on view in the spring of 2009 (DLK COLLECTION review here). In general, his work has just begun to enter the secondary markets, with a small handful of lots selling between $8000 and $11000 in the past few years.

JTF (just the facts): A total of 15 black and white photographs, framed in silver and unmatted, and hung against white walls in the single room gallery space. All of ... Read on.