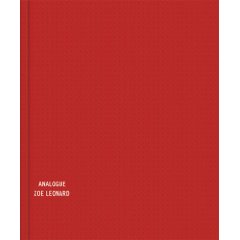 JTF (just the facts): Published in 2007 by the Wexner Center for the Arts and the MIT Press. 192 pages, with 83 images (a mix of black and white and color, all square format with black borders). Includes a foreword by Sherri Geldin and an essay by the artist composed of excerpts and quotations. The images shown were taken between 1998 and 2007. (Cover shot at right.)

Comments/Context: Zoe Leonard’s Analogue is a book about the slow transformation and eventual extinction of a certain kind of neighborhood life from the streets of New York, and about the rebirth of some of its cast off parts in down-the-food chain locations around the world.

In the first set of images, straight-on shots of small storefronts, graffiti covered local mom-and-pop shops selling a wide variety of everyday merchandise via hand lettered signs begin the narrative of change. There are windows filled with roll after roll of fabric, with plastic covered furniture, and with obsolete electronics, and more than a few of these businesses are long gone, the security grill rolled down for good. The story transitions via a group of pictures of huge bundles of clothing, packed and ready for shipment via the global rag trade. Leonard then follows these discarded and recycled objects to far flung locations: Warsaw and Budapest, Ramallah and East Jerusalem, Kampala and Mexico City. Here these items look for new buyers, hung in rickety roadside stands or laid out on the ground on top of colorful plastic tarps. The stores are chaotic jumbles of merchandise, often with a poignant array of mismatched shoes or plastic brooms.

If this sounds like a warmed over cliche, the “what has happened to our world” story told once more, think again. Leonard’s pictures are surprisingly unsentimental or nostalgic. As she documents these disappearing New York stores, she seems less to be looking back wistfully at “better” times, but more to be asking pointed questions about how changes ripple through our lives (the analog to digital metaphor) and how they manifest themselves in unexpected ways in unexpected places. Sure, there are a few sad window displays and some lonely weather beaten chairs, but these seem more in the spirit of endangered and valued vernacular traditions (a la Walker Evans) than overt romanticism. There is certainly an echo of Atget’s documentation of the old sections of Paris in Leonard’s views of these New York streets.

I think the images in the various other countries have an even stronger sense of time in them, of a slowing or stopping of time, as tired clothes and shoes from decades past search for new lives. It’s as if the small shops that failed in the hectic tumult of New York have found reduced expectations and more modest realities in the slower moving cities and towns of less developed nations, where change comes quite a bit more gradually.

In general, I think many of these images work well as stand alone pictures, while others would perhaps resonate better in a grid of multiple views of a similar part of the story. Either way, this is a compelling project that raises questions about the nature of change in our everyday lives, and how those changes ripple into the world that surrounds us.

Collector’s POV: Zoe Leonard is represented by Yvon Lambert in Paris and New York (here). Not much of her work has appeared in the secondary markets in the past few years; the works that have sold were priced between $2000 and $20000. In the context of our personal collection, Leonard’s New York storefronts would mix well with many different kinds of work from our city/industrial genre. They would also be an interesting contrast to Brian Ulrich’s recent images of empty malls and thrift stores.

Wexner Center for the Arts