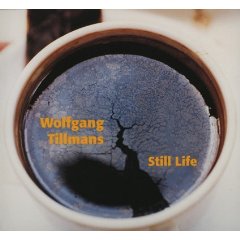 JTF (just the facts): Published in 2002 by Harvard. 64 pages, with 36 color images. Includes an essay by Benjamin Paul. (Cover shot at right.)

Comments/Context: While we already have several Wolfgang Tillmans monographs in our library, I recently came across the small spiral bound catalog of a show at Harvard’s Fogg Art Museum in 2002 and it seemed to be just exactly what we have been looking for all along. Tillmans is of course best known for a dizzying array of portraits, landscapes, abstractions, and other images of the circa 1990s “younger generation”, casual snapshot-like images that chronicle the relaxed lives of couples and friends in ways that echo Nan Goldin’s intimate pictures of her friends and lovers decades earlier. He is also known for the careful installation of his work in galleries and museums, where he often uses a wide range of sizes and formats, sometimes under glass on tabletops or unframed and taped to the wall, new work juxtaposed and mixed in with older images to create flowing narratives and unexpected connections.

An intriguing problem for collectors (and museums I imagine) is that Tillmans‘ work seems to be most resonant when shown in groups, where the images can respond to each other; many of the single images work extremely well in a cluster, but are perhaps less earth shaking when viewed as a stand alone print isolated from others of a common theme. Likely because of our affinity for florals, we have always been most drawn to his still lifes, which portray classic motifs in a thoroughly modern and some might say “authentic” way. This small book is thus perfect for us, as it gathers together in one volume the image types that we are most interested in exploring in more depth.

Most of Tillmans‘ still lifes are chaotic tabletop gatherings or dense windowsill arrangements of seemingly random objects, all bathed in natural morning light. Flowers and scraggly plants are often found sticking out of a drinking glass or a plastic disposable water bottle; fruit is often artfully arranged or seemingly recently discarded, peels and all. Crumpled laundry, broken shells and dirty dishes also make cameos. At one level, the images appear to be artless snaps of someone’s lived-in apartment; at another, the found objects seem carefully placed and somehow representative of the larger life around them. To our eyes, the parallels to Josef Sudek’s lyrical groupings of eggs, bread crusts, and flowers in his studio window from the 1950s are very strong, but updated by Tillmans to reflect a contemporary world and aesthetic.

Collector’s POV: Wolfgang Tillmans is represented by Andrea Rosen gallery in New York (here). Tillmans‘ work is readily available at auction, with prices ranging from $2000 to $50000, often depending on dimensions and edition size. For our particular collection, one of the floral still lifes in this catalog would be the best fit into our framework, and could certainly be considered evidence of new conventions being applied to a traditional subject.