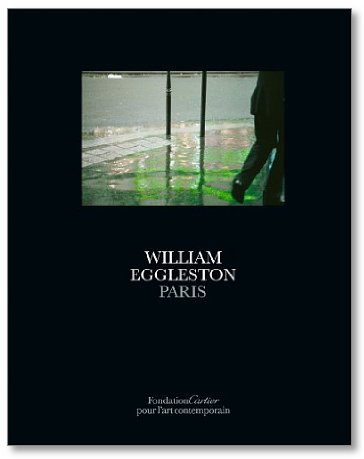 Comments/Context: Given the amount of adulation William Eggleston has received in recent years, it hardly seems to matter whether he ever makes another photograph; his influential place in the history of photography is already well solidified. And yet, here he is with a new body of work, continuing to refine his unique way of seeing.

Eggleston’s images of contemporary urban Paris (taken in the past three years) continue his evolution toward more fragmented and abstracted pictures. These works include less people and tell less complex narratives than his iconic images of the 1970s. There are more chaotic splinters and shards of frantic eye catching color; graffiti, commercial signage/posters, and neon lights all make repeated appearances. But each and every image still has at least one surprising element of color: a shiny red shoe, a pair of yellow shorts on a green park bench, a pink hat and a pink car together, or a reflected neon green glow captured in wet pavement.

Interleaved with the photographs are a number of densely patterned abstract drawings, reminiscent of mid career De Kooning (although less violent) or Kandinsky. At first glance, I found these splashes of manic expressive color distracting; there’s just too much stimulation to ignore them. But if we credit Eggleston’s genius as primarily that of a highly attuned eye for the relationships of color, then these drawings make more sense in the context of the photographs; they are simply a different manifestation of the same creative impulse, and the juxtapositions of the two show us themes and variations (in a musical sense) as they blast through his mind.

In general, the photographs in this body of work are uneven, and perhaps could have used a heavier hand in editing; overall, it’s not as strong top to bottom as some of his earlier projects. But if we strip away the bottom half and look only at the best of what’s found in this volume, it is clear that Eggleston still has an amazing eye for the overlooked, and can find unexpected hints of beauty almost anywhere.

Collector’s POV: William Eggleston is represented by Cheim and Read in New York (here). According to the gallery, the images in the show/book were artist’s proofs for exhibition only and there are no plans to edition them for sale. They are planning to have some of the drawings available when they open a show of new work by Eggleston in January 2010.