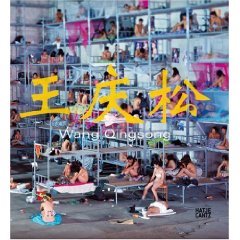 JTF (just the facts): Published in 2006 by Albion and Hatje Cantz, in conjunction with an exhibit at Albion in London. 136 pages, with an essay by Zoe Butt. Includes large plate images, as well as a comprehensive list of works as thumbnails (with sizes and editions). (Cover shot at right.)

Comments/Context: To Western eyes, the high points to the storyline of China’s transformation in the past few decades have become predictably well known: unprecedented and explosive economic growth, staggering new construction projects and radical urban change, an increased openness to and embracing of Western culture, and a much larger and more powerful position on the world stage. It is not surprising that amidst these changes, and in concert with a gradual relaxation of central censorship, artists have begun to examine the changes going on all around them and to ask hard questions about how China is being recast. 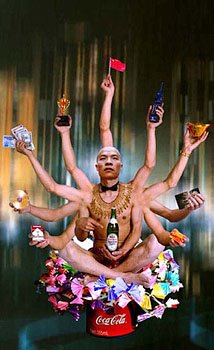 Wang Qingsong is a contemporary photographer who uses sarcasm, irony, satire and humor to expose some of the undesired consequences and unintended effects of the country’s modernization on the collective psyche of the population. Beginning in 1997, Wang has made theatrical images that have centered on the quiet war between traditional Chinese culture and the encroaching Western lifestyle. His early work was dubbed “Gaudy Art”, for its garish colors and not-so-subtle surrealistic kitsch. His 1998 work, Prisoner, shows Wang trapped inside prison bars made of Coke cans; Thinker, also from 1998, has him seated on a lotus leaf in Buddhist prayer, with a huge McDonald’s logo carved in his chest; Requesting Buddha no. 1, 1999, (at right) has the Buddha’s many arms filled with a variety of consumer products. These and other images all parody the materialism of the West and how it has invaded the minds of the Chinese people. Instead of worshiping self denial, fulfilling every desire via consumerism is the new norm. 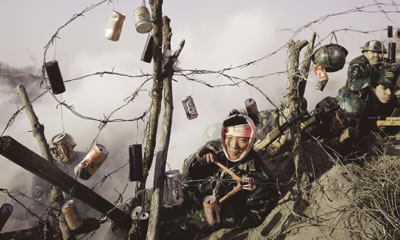 Unlike the heroic and patriotic battle scenes from propaganda films, Wang’s series of images entitled Another Battle highlights the clash going on between the traditional and modern cultures, and shows Wang as a defeated and bloodied commander, lost among the razor wire decorated with soda cans. (Another Battle no.8, 2001 at right.) Other images show the battlefield complete with McDonald’s trash cans and road signs. These images have been elaborately staged, and have the feel of film stills. 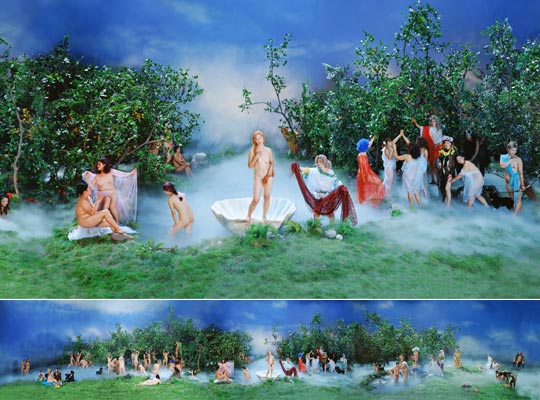 Wang’s more recent output has evolved into elaborate and monumental tableaux, with large numbers of actors and painstaking stage sets, in the end becoming massive, scroll-like photographs, some more than 20 feet wide. While in approach there may be valid comparisons to Gregory Crewdson or Jeff Wall, Wang’s images are firmly rooted in typical and traditional Chinese artistic forms and metaphors and make no pretense of their careful manipulation. The image at right, Romantique, 2003, shows both a small detailed section on the top, with a thumbnail version of the entire work below (impossible to see I realize). Here the world is a confusing, fabricated mixture of Chinese and Western allusions and symbols, full of staged snippets from famous paintings by a wide range of recognized masters, from Botticelli and Raphael to Manet and Matisse.
Wang’s exaggerated work brings home many of the subtler challenges posed to China by such rapid modernization. As traditions are exchanged for Western consumerism, his work points to continuing social questions about what lies ahead for this giant nation. This monograph is almost like a catalog raisonne, as it has a complete set of all Wang’s images and other detailed print/negative information. As such, it is an excellent reference resource on this innovative Chinese photographer.
Wang Qingsong’s artist website can be found here.

Collector’s POV: Wang Qingsong’s work has become increasingly available in the secondary market in the past few years. Most of the images come in at least two sizes, and are in editions of 6, 10 or 20. Smaller single images have been priced starting at around $10000, moving upward toward $100000. Only a few of the large tableaux have come to market, and all have sold in the six figure range.