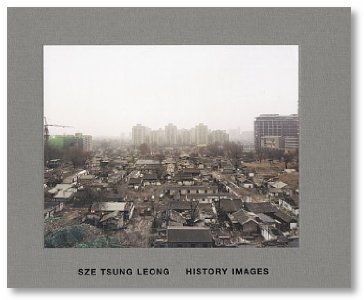 JTF (just the facts): Published in 2006 by Steidl (here). 144 pages, with 80 color plates. Includes essays by Stephen Shore and the artist. (Cover shot at right, via Photo Eye.)

Comments/Context: In the past few years, if we had to choose one single symbol of the vast economic transformations that have been occurring in China, it would have to be the image of a half-built skyscraper, complete with a crane and wrapped in mesh covered scaffolding. Numerous artists have latched onto these newly constructed buildings as poignant metaphors for the societal changes that are taking place; we could probably rattle off half a dozen photographers who have made roughly this same picture, with variations in perspective, time of day, and specific location making each one slightly different, but in the end, much the same.
Sze Tsung Leong’s photographs of this same frenzy of construction are unique in that they are not so much about the building process, but about the changing context of the urban environment and the erasing of important history. Rather than looking up with awe at the endless geometries of the modern skyscrapers, Leong steps back and situates the buildings in their larger environment, showing the transitions between old-style neighborhoods and new planned communities and apartment blocks.
His best images are those that have startling juxtapositions: old and new, construction and destruction. In several, ancient Imperial homes, highlighted by carved wood beams and tile roofs, are set amidst humongous piles of brick rubble and broken concrete, with new towers seen rising in the distance in the smoky grey sky. The old narrow alley lifestyle has been abandoned (even condemned) in favor of the new sparkling apartments with wide roadways and grassy boulevards. In some images, three layers of history are visible, with grubby Socialist housing blocks providing a buffer between old and new.
These are powerful pictures, in that they show clearly how the world is being transformed before our eyes. The reforms of the market economy have made the land more valuable, and traditional single family homes and neighborhood warrens are literally being wiped out and replaced by rows of 30 story apartment buildings; the implicit question in the photographs is how the lives of the people will be changed, as they move to the new Westernized boxes and forget their old ways. (Yet another layer in the images is the question of class, and of which people will live where.) And finally, until the new has completely swallowed the old, the rubble and debris will continue to pile up.
While these images are full of bustling activity and new construction, they are surprisingly low on optimism. They are a sometimes harsh reminder of what is being destroyed in the name of progress and a subtle warning that the new may not be obviously better.
Collector’s POV: Sze Tsung Leong is represented in New York by Yossi Milo Gallery (here). Leong’s images have not yet reached the secondary markets in any meaningful way, so gallery retail is really the only way to access his work in the short term. While several of Leong’s images could fit into our city/industrial genre quite easily, I think the work is more successful in book form, where many more images can be sequenced into a larger and deeper narrative.
Transit Hub:
Twitter| Facebook|