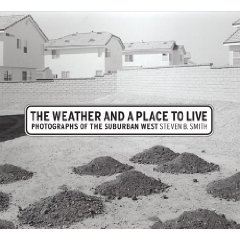 JTF (just the facts): Published in 2005 by Duke University Press (here) in conjunction with the Center for Documentary Studies/Honickman First Book Prize in Photography (here). 122 pages, with 80 black and white images. Includes an introduction by Maria Morris Hambourg. (Cover shot at right, via Amazon.)

Comments/Context: One afternoon back in late December, I selected a handful of photo shows to see and headed off into the very brisk (some might say arctic) weather to gather some information for a group of reviews. One of the shows on my list that day was a selection of Steven Smith’s photographs of the suburban West, which were on view at Sasha Wolf. After making my way down to TriBeCa, I came to the door of the gallery, only to find the lights out and a paper sign taped to the window: “Gallery Closed: No Heat!”. While I was thwarted that day, and didn’t get a chance to get back to the gallery before the show closed, I am happy to say that I prevailed in the end, by getting my hands on a copy of this excellent monograph.

Purely from the point of view of a collector, I think the cult of the New Topographics is a fascinating study in the slow but relentless growth of an artistic movement. While it is certainly getting harder and harder each year, it is still possible to gather a representative sample of images from this landmark phase of photography: a few images by Robert Adams from The New West or Denver, a selection of works by Lewis Baltz from NIP and Park City, plus grain elevators by Frank Gohlke, suburban backyards by Joe Deal, and maybe even some color work from Stephen Shore. What I find particularly interesting in all of this is that in a span of two decades (the 1970s and 1980s), these photographers (and a few others) actively grappled with the suburbanization in the western US, effectively wrestling many if not most of the thorny conceptual issues of the times to the ground, leaving the topic effectively “done” for the many artists that were to follow along later. While in recent years, we have seen Japanese, Chinese and European photographers take up some of these same issues and threads from their own national perspectives, the suburbanization (and commercialization) story is of course far from complete here in the United States (especially in a world of renewed interest in the environment and climate change), and yet, few American photographers have revisited and reconsidered these issues in an updated and contemporary way in the past decade or two, without seeming too derivative or stuck in the 1970s. Most of the original photographers moved on to other related or tangential subjects, and very few new artists have stepped into the void to successfully carry the flag onward.

It is the synthesis of the old and new, and most importantly, the bringing in of updated perspectives and vantage points from our current world that make Steven Smith’s topographic works so compelling. While the setting of the subdivision, the prefabbed tract house, and the gated development community will certainly feel familiar, the underlying issues have clearly continued to evolve and change. With most of the prime real estate in the West long ago carpeted with houses, builders are now encroaching further onto marginal desert lands, especially those that need an abundance of alterations: bulldozing, flattening, grading, retaining, and terracing, with special attention being paid to the increasingly scarce resource of water, via elaborate culverts, spillways, runoffs, and drainage ditches. Smith’s images of these wide open construction sites find eye catching patterns and geometries in the altered landscape, while also asking pointed questions about the real sustainability of such approaches and about the scale of the arrogance and hubris that makes us think we can so readily transform an indifferent land in our own image.

Smith then moves in for a closer look at the unfinished houses themselves, mostly captured in the midst of construction, with piles of raw boulders, plastic drainage tubing and sprinkler systems, driveway heating coils, and cement lawn edging still in the process of installation, with new sod freshly laid out in perfect rows near thick cinder block privacy walls. Plenty of new homes sit precariously under massive rock formations or at the bottom of obvious desert washes and hillsides, mudslide disasters waiting to happen. The scenes have a puzzling sense of absurdity and head scratching, laughable idiocy. The only trees that are found in the blinding sun of these developments are the spindly, newly planted kind (sure to die almost immediately without constant watering); otherwise, garden decoration is dominated by large desert rocks settled in curved beds of dusty gravel, oddly spotlit by nighttime lighting.

As I flipped through these images, I was astonished to find that we haven’t gotten much smarter about how we build our suburban communities; in recent decades, the whole enterprise has apparently been super-sized and we’ve been extending into more and more challenging terrain to meet the ever increasing demands of a growing population. This body of work will I think be looked back on as an important bridge piece to recent projects that have chronicled the violent bursting of the American housing bubble; it effectively shows the mood of the run up and the boom times, before the bottom began to fall out. As such, Smith’s images now have an unexpected sense of impending doom; since we already know the ending of the story, the pictures are surprisingly similar to the morbid fascination of watching a car crash in slow motion.

Collector’s POV: As I mentioned above, an exhibit of Smith’s work was recently held at Sasha Wolf Gallery in New York (here); Smith also has prints with Gallery Luisotti in Santa Monica (here). All of the images in the book were shot on film and have been printed in digital inkjet on baryta based paper. Each image comes in three sizes (12×15, 20×24, and 30×40), with a total of 20 images in the entire edition, spread across the three sizes (9 small, 7 medium, and 4 large). Prices for the prints are $1200, $2000, and $4000 respectively.

For those collectors who have immersed themselves in the conceptual framework of the New Topographics or for those who simply have an affinity for the built structure as subject matter (like ourselves), Smith’s work will be an excellent extension into the contemporary domain. The images are also a terrific example of how black and white can still be relevant, even in the color dominated digital age.