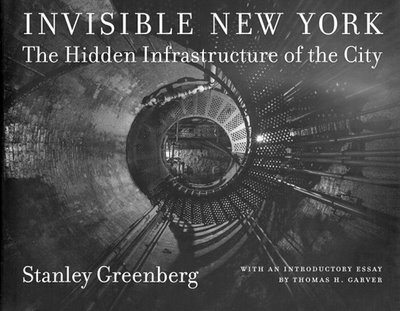 JTF (just the facts): Published in 1998 by Johns Hopkins University Press (here). Subtitled The Hidden Infrastructure of the City. 100 pages, with 53 black and white images. Includes essays by Thomas Garver and the artist, as well as detailed plate by plate discussions of the locations and their histories. The images were taken between 1990 and 1997. (Cover shot at right, via artist website.)

Comments/Context: I was first introduced to Stanley Greenberg’s work in the back room of Tom Gitterman’s gallery a year or two ago, where a couple of the prints were hanging near the office area. Since then, I’ve been meaning to buy this book, so I could dig a little deeper on the work and see a larger number of images from the series.

Greenberg’s images chronicle the civic works and underworld utilities of New York, the often overlooked and hidden underbelly of non-places that keeps the city running. His subjects are bridge anchorings and construction shafts, electricity tunnels and water reservoirs, missile silos and rail yards, most of which have a throwback look of disrepair and decay. His compositions are full of intersecting found geometries (girders, trusses, turbines and the like) and long receding views down dimly lit, unpeopled, industrial tunnels. I think his densely packed interior scenes are the most successful.

To my eye, the work bears some relationship to both that of the Bechers and of Ray Mortenson. While Greenberg’s images are far warmer and more human that the rigorous typologies of the Bechers, I think they both share a conceptual desire to respectfully document vanishing (and important) vernacular architectural forms. The connection to Mortenson (and in particular to his images of the South Bronx) comes of course in the focus on decay and abandonment; both photographers effectively use their images to point out what happens when buildings fall into disuse and decline. I also see some more tenuous connections to the 1920s industrial work of Albert Renger–Patzsch, especially in Greenberg’s outdoor scenes.

All in, this is a solid book of unexpected photographs, well worth adding to your library.

Collector’s POV: Stanley Greenberg is represented in Gitterman Gallery in New York (here), Robert Klein Gallery in Boston (here), and Richard Levy Gallery in Albuquerque (here). Prints from this series are 28×36, in editions of 10. They are priced at $5000 each. No secondary market for Greenberg’s work has developed as yet, so gallery retail is the only option at the moment. While these works would normally fit perfectly into our city/industrial genre, once again we are constrained by size; these prints are just too big to fit easily into our display space without some tricky maneuvering. While the larger size certainly makes the images more dramatic, we’d need to see them printed 11×14 or so to make them work for us.