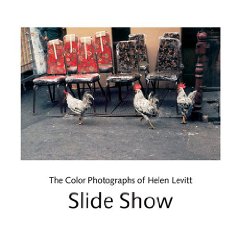 JTF (just the facts): Published in 2005 by powerHouse Books (here). 120 pages, with 110 color images. Includes a foreword by John Szarkowski.

Comments/Context: I don’t think it was until we moved back to New York that I really started to resonate with Helen Levitt’s work. Her 1930s and 1940s black and white images of children in the streets, while undoubtedly well crafted, somehow didn’t grab my attention; I was more drawn to the architectural transformations documented by Berenice Abbott from the same period.

But it is her color work from the 1960s and 1970s that has made me change my mind a bit on Levitt’s rightful place in the history books. How’s this for a statement: of the great black and white photographers working prior to the 1950s, Levitt was the most successful at embracing color photography and making a superlative body of color work in her later career. The only other “old school” photographers I can come up with who made the transition to decent color work are Harry Callahan (his later dye transfers), Andre Kertesz (Polaroids) and Walker Evans (Polaroids). If I’ve missed some glaring great example, leave it in the comments, but I think the statement stands – Levitt did something that almost no one else did.

The images in this book perfectly capture the feeling of New York in the summer (no wonder her work is often labeled “social realism”). Virtually all the pictures are of people, not straight on portraits, but people in the context of their lives: on street corners, with pets, near parked cars, sitting on stoops, smoking, waiting, taking a break. Her compositions often capture the world slightly off-kilter, with spontaneous secondary stories playing out on the periphery, just like they do in real life. On first glance, these images look like snapshots; upon further review, they turn out to be tiny vignettes of everyday life, somehow optimistic amidst generally poor living conditions and plenty of old age. Her use of color isn’t self-conscious; she doesn’t use super-saturated attention grabbing color. Instead, color is used as just one of many tools that can make a picture resolve into something interesting, the hood or a car, or a dress, or a door frame suddenly providing a visual contrast. And even though there are a few dated fashions and hairstyles, these pictures have a timeless quality to them, as though you could step into the street in parts of New York in August and see these exact same stories playing out all over again.
.
Collector’s POV: Levitt’s vintage silver prints from the 1930s and 1940s come up at auction from time to time, ranging in price from $10000 to $60000. Later prints from these same negatives are typically priced between $2000 and $6000. Her dye transfer prints have been much more scarce: only a handful of prints (some vintage, some printed in the 1990s) at auction in the past five years, selling for between $2000 and $12000. Levitt is represented by Laurence Miller Gallery (here) in New York, Fraenkel Gallery (here) in San Francisco, and Robert Klein Gallery (here) in Boston. While these images don’t neatly fit into our city/industrial genre (too many people), they are growing on me over time, so perhaps there will be a place in our collection for one or more of these prints at some point in the future.