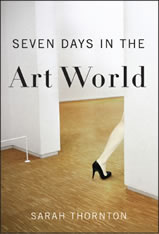 JTF (just the facts): Published in 2008 by W.W. Norton & Company. 274 pages. Divided into 7 chapters (roughly 30 pages each): The Auction, The Crit, The Fair, The Prize, The Magazine, The Studio Visit, and The Biennale.

Comments/Context: Sarah Thornton’s chronicle of the booming art world of a year or two ago might just as well be an anthropological study of an isolated tribe of the Amazon rain forest or some other far off locale. It is a piece of ethnographic writing, where the social and cultural behaviors of a group of people are described in depth, using thorough and careful “participant observation” (fly on the wall reporting) as the primary research method. This is not to say that this book is academic and boring; just the opposite in fact – it is well paced, gossipy at times, and generally highly entertaining. It is not, however, much about the art itself, but an in-depth study of the subcultures and social signals that make up the ecosystem that surrounds it.

As collectors ourselves, tangentially related to those described in these pages, the sections devoted to the study of auctions, art fairs, and the biennale didn’t offer us many new insights, as we have participated in these worlds first hand. That said, the auction section neatly describes the theatrical spectacle of an evening Contemporary Art sale at Christie’s, the fair section genuinely brings forth the wearying machinations of dealers, advisers and collectors at Art Basel, and the biennale section captures the idiosyncrasies of the national pavilions and the high end socializing.

I found more unexpected ideas and discoveries in the other sections. In The Crit, I was intrigued by the exhausting and mystifying full day critical review process that artists endure at CalArts, an amorphous, rambling and often painful discussion of an artist’s current output. In The Prize, the backstage workings of the selection committee for the Turner Prize turned out to be less interesting than the four nominees themselves and how they were handling the pressure and publicity. And given our own writing about photography on this site, I was particularly interested by the section on Artforum (The Magazine) and the perilous balancing act that goes on between writers/critics, editors and advertisers each month to get the magazine out and the care with which the magazine’s viewpoint is defended.

My favorite section in the book was was The Studio Visit, a sprawling review of Takashi Murakami’s multi-national production empire, on the eve of his now famous MOCA show which included the Louis Vuitton shop as part of the exhibit. While we have been on intimate studio visits before, the scale here is broad and monumental. While there are plenty of large personalities in this section as well (including Murakami himself), there is more about the art and its making in this chapter than anywhere else in the book. The artist’s process and management of his team of people are unusual and memorable.

Collector’s POV: Overall, this narrative is very well crafted and seems to have been thoroughly researched, given the huge list of interviewees in the back. It is very people-centric and often dives into the subtle gestures and remarks that epitomize the inner workings of a small social group. Think of it as quick and lively read, with plenty of tidbits to engage even the most experienced and jaded collectors.