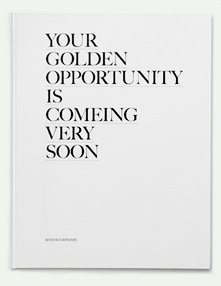 JTF (just the facts): Self published by RJ Shaughnessy in 2009. Unpaginated, with 37 black and white images. (Cover image at right.)

Comments/Context: With this review, we’re stepping into new waters for this forum: discussion of an as yet unrepresented photographer and his work (it won’t be a regular practice, we promise, as there are many other sites out there that do it far better than we would). As regular readers know, we have heretofore tended to stick to artists who have gallery or museum shows we can see for ourselves, or books that come from well known publishers, these two combining to generally limit our purview to photographers that have already meaningfully established themselves in the gallery system.

There are two reasons that we decided to break the rules for this post: one, I like the way RJ approached us, and two, I actually like the work. Given our growing presence in the photography blogosphere, we get many emails from photographers who want us to talk about their work or just be aware of what they’re doing. What I appreciate about RJ’s approach was that it appears that he actually did his homework; the body of work he chose to introduce to us (and he has several) actually has affinities with the kind of work we typically like and that can be found in our collection. He then asked whether he could send us a copy of the book. When we clicked through (and we look at each and every referral I can assure you), the work he recommended was a surprising fit (others on his site were less so) and we gladly accepted his proposed gift. The book came a day or two later. Instead of thinking of us as yet another faceless media outlet to be pitched, he apparently actually tailored his approach to our editorial style. It worked; well done. The images in this particular book have a certain relationship to the post apocalyptic view of David Maisel that we discussed this morning (here), although Shaughnessy’s works are down at the granular level of everyday Los Angeles life rather than 10000 feet in the air. His subjects are the barriers in the world around us: fences, walls, posts, and pillars, each of which has been battered and broken, crumpled, dented, scratched and smudged by who knows what. (Formosa Avenue #1, Los Angeles, 2008 at right.) All of the these forms are photographed with an eye to extreme contrast, the harsh white light from a flash adding a wince inducing glare to the whites in the nighttime pictures. What is left is some kind of surreal nocturnal (or subterranean) environment of destruction and disregard, the setting for a 21st century crime scene.

What I like about these pictures is that they combine this atmospheric Weegee noir with crisp patterns and geometrics formed by the materials themselves. It’s hard to see a photograph of a chain link fence and not think Lee Friedlander, but Shaughnessy’s fence compositions have disturbing imperfections, twists and perforations that push the material into an altogether more sinister realm. I think there are also echoes of Lewis Baltz in this body of work, but replacing his rigorous formalism with Shaughnessy’s own brand of fluid decay.

Collector’s POV: Like most unrepresented photographers I imagine, Shaughnessy’s answers to my questions about image dimensions, edition sizes, and prices were all a bit vague, likely a result of the general practice of figuring it out as you go along that occurs until a gallery comes along and standardizes the process. I will say however that I think this work would complement other work we have in our collection and could easily and successfully share the wall with city fragments from a variety of established masters.