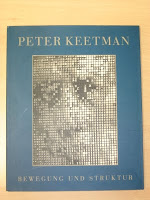 JTF (just the facts): Published in 1996 by Cinubia Production, under the direction of Manfred Heiting. 160 pages, with 108 black and white images. Includes essays by Rolf Sachsse, Holger Tiedemann, a biography and a bibliography, all in German. (Cover shot at right.)

Comments/Context: Many collectors will recognize the work of German photographer Peter Keetman by one of his signature projects: his images of water and oil droplets, or perhaps his work documenting a Volkswagen factory in the early 1950s. Along with Otto Steinert, Toni Schneiders, Ludwig Windstosser, Siegfried Lauterwasser and others, Keetman was part of a group called Fotoform, who pursued an approach to image making called Subjektive Fotographie (or “subjective photography”), in reaction to the Neue Sachlichkeit (or “new objectivity”) movement of Renger–Patzsch, Blossfeldt and others from the 1920s. These photographers were looking for a more moderate form of Modernism, a return to humanism after decades of cool detachment.

While we already own the Volkswagenwerk 1953 book (linked below), we have had a hard time finding a more comprehensive monograph of Keetman’s work. So when we recently came across this volume buried in the stacks at the Strand, we knew we had to have it, even though all the essays are in German.

In general, Keetman’s works have strong qualities of simple abstraction: geometries, patterns and repetitions that anchor the compositions, even when they have natural forms or everyday situations as their subject matter. Plowed fields, rooftops, construction sites, water droplets, waves, and molded steel car hoods all become carefully controlled exercises in the arrangement of sinuous lines. We particularly like his multiple exposure images, many of which capture the frenetic motion and energy of city life (there is an amazing multiple image of windows and scaffolding in this book, entitled 2 mal 1 1/2, from 1959, that we had never seen before).

For some reason, Keetman and his contemporaries seem to have been bypassed by many vintage collectors. Perhaps this is because they are less well known here in the United States, or maybe it is their transitional, in between placement, sandwiched just after Callahan and Siskind but before the New Topographics. I think the photography from this movement (and Keetman’s images more specifically) makes an intriguing connection between the ID Chicago school and someone like Kertesz. There were many approaches to reworking and manipulating Modernism in new ways during this period, and adding the voices of these 1950s German photographers adds color to this conversation.

In any case, this book is an excellent reminder of Keetman’s consistency over the decades. Pick up a copy if you can find one to see a broader sample of his output.

Collector’s POV: It is not at all clear to us who might represent the estate of Peter Keetman. Both Howard Greenberg Gallery in New York (here) and Galerie Kicken Berlin (here) carry some inventory of his work. Luckily, Keetman’s vintage prints regularly come up for sale at the German auction houses, generally finding buyers in a range between $2000 and $8000, with most near the lower end of that range, so it’s quite easy to find a solid example of his work in the secondary markets. We already have one Peter Keetman image in our collection (here) and can absolutely imagine adding others in the future.