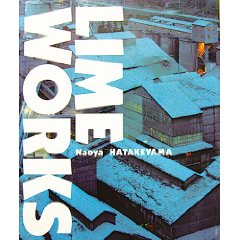 JTF (just the facts): Published in 2008 by Seigensha Art Publishing. First edition by Seigensha, third edition overall. 120 pages, with 70 color plates. Includes a short essay by the artist. The images were taken in various locations all over Japan between 1986 and 1994.

Comments/Context: A little known fact about Japan is that it is one of the world’s largest suppliers of limestone, dug from quarries that dot the landscape up and down the archipelago. The rock is cut from the hillsides, and then pulverized into thick white dust that becomes a key component in cement and concrete. Most of the dense urban sprawl that is the stereotype of futuristic Japan is made from this cement.

Japanese photographer Naoya Hatakeyama spent many years traveling to distant limestone quarries all over the islands, making pictures of the landscape and the huge industrial structures built to process the material. The book begins with images of the chaotic aluminum buildings, covered with a staggering array of rusting conveyor belts, pipes, tubes and silos, and often coated with a soft frosting of white lime dust. Many are taken at twilight, when the colored lights are starting to come on and the sky is turning unexpected colors. His images then step back to take in a broader view of the land, with miniature trucks engulfed by the huge swaths of road and emptiness, gargantuan holes in the ground or terraced hillsides with stagnant pools of adjacent water. The last few images are highly textured pictures of natural outcroppings of jagged limestone. Together, they are a deadpan portrait of the transformations going on, void of any people.

Over the past few months, I have spent time with this book and have become more and more impressed with the pictures it contains. Given our affinity for industrial photography, it is perhaps not surprising that we would enjoy the vast images of factories, with their geometric forms and intersecting lines, particularly some of the ones that are detailed shots of abstract machinery encrusted in white. Beyond these, I have also come to appreciate the poignancy of the wider angle shots of the topographical changes at the quarries. Edward Burtynsky (among others) has elaborated on these ideas, but Hatakeyama’s images are somehow less harsh, often taken in the warm glow of the late afternoon.

There is a superb short video on the work of Naoya Hatakeyama (narrated by the artist himself), entitled The Skin of the City, at the JGS Forward Thinking Museum (here). It is well worth a few moments of your time. To find it, enter via the elevator and find the FTM Theater on the navigation device. Go there and look for the film, among the many available for viewing.

Collector’s POV: I can absolutely imagine adding work by Hatakeyama to our collection, given the terrific images in this book. The artist is represented in Japan by Taka Ishii Gallery (here); there was a show of his new work called “Maquettes/Light” on view in their Kyoto gallery (here) this past March. His work has only recently begun to be available sporadically in the secondary markets here in the US. Clearly, we will need to add more of Hatakeyama’s books to our library to further educate ourselves about this important photographer.