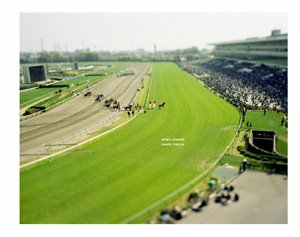 Comments/Context: We were first exposed to the work of Naoki Honjo in the Reality Check group show at the Met (review here) last winter, where a single image by the artist was on view. Seeing this picture made us want to know more, and so we recently purchased a copy of his book, Small Planet, which contains a broader sample of this body of work.

Honjo’s images are created by taking an aerial view with a very shallow depth of field, distorting and blurring nearly the entire image except a small area/narrow plane of crisp focus. The effect is to make the images look miniaturized, like a toy diorama. This technique (“tilt shift”) is used by Honjo in a variety of locations: dense cityscapes, seashores, warehouses and railyards, construction sites, swimming pools, roadways, sporting events and parks. The clever inversion is, of course, that these scenes which look entirely fake/constructed are indeed all too real.

A detractor might characterize this work a simple exercise in optical trickery, and certainly, there is an element of forcing the viewer to consider how his/her eyes actually work, how seeing and perception actually happen. But after looking at the dozens of images in this book, I remain intrigued by each successive image, the weird novelty of scenes that shift between real/unreal still somehow fresh. The compositions from higher up and farther away, where the figures and cars are the size of ants, seem to be the most successful in using the technique for dramatic effect. While the majority of these pictures were taken in Japan (and a more recent series was made in London), given the visual diversity of our world, I’m sure Honjo will have no shortage of subject matter to be reconsidered using this approach.