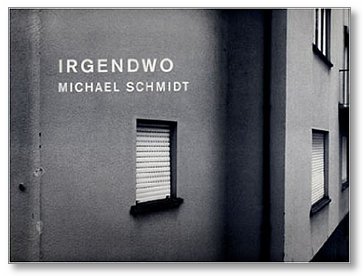 JTF (just the facts): Published in 2005 by Snoeck. 140 pages, with 67 black and white images. Includes an interview with the artist by Dietmar Elger. (Cover image at right.)

Comments/Context: Given the dominance of the the Becher students (Gursky, Ruff, Struth, et al) in the art markets in recent years, it would be easy for collectors to come to the conclusion that everything interesting in German photography was and is emanating from Dusseldorf. The reality is far more complex than a monolithic movement would allow. This book by Michael Schmidt is an example of some of the excellent work coming from a group of photographers who have been working in and around Berlin/Essen for decades, with loose ties to Lewis Baltz and Paul Graham.

In contrast to a search for single individual image, Schmidt works in serial format, gathering together sequences of images that together provide a more nuanced view of a subject (just like the Robert Adams book we reviewed last week). It is not so much that these groups tell a deeper or more linear narrative or story, it is that the relationships between a group of fragments or moments can broaden our understanding of the overall realities and rhythms buried underneath the surface.

In this particular book (and Schmidt has made several), the photographer has spent time in small provincial towns, capturing a mix of intimate landscapes, views of both traditional and modern suburban buildings, portraits of the inhabitants (primarily young people), and miscellaneous fragments (windows, walls, shopping carts, and loading docks). The title of the book can be translated as “somewhere” or “anywhere”, and the pictures together portray a dismal monotony of vague places lacking identifiable details. In the interview, Schmidt alludes to the “loss of home as a place with identity”, and there is certainly a cheerless melancholy that pervades the whole series of pictures.

And yet, this chronicle of German non-places is somehow surprisingly powerful and evocative. The spectrum of greys in this book have a rich, tactile quality, with a less than perfect sharpness that makes them softer; these “colors” help create the overall mood of the book. It is however the sequencing that seems most important in the end. It is the juxtaposition of a blank concrete wall, next to a teenage woman’s face, next to a less than beautiful modern house, next to an image of a supermarket parking lot, next to an ornate architectural detail, next to a closed window that bring together all the pieces of this life into a subtle and complex whole.

Collector’s POV: Michael Schmidt’s works can be found at Galerie Nordenhake in Berlin (here) and Mitchell-Innes & Nash in New York (here). Galerie Nordenhake has just opened a mini-retrospective of Schmidt’s work, on view through June 20th (here). Mitchell-Innes & Nash had a show in the spring of 2008 (here). Only a handful of works by Schmidt have appeared at auction in the past five years, most selling for under $2000.

This book has been a real eye opener for me and has continued to keep me thinking; I now feel compelled to dig deeper on Schmidt and his contemporaries, as this work seems to have been somewhat overlooked (at least by collectors we know here in America) and well worth further review/education on our part. There are clearly images in this series, especially the more deadpan architectural fragments, that would fit perfectly into our collection.