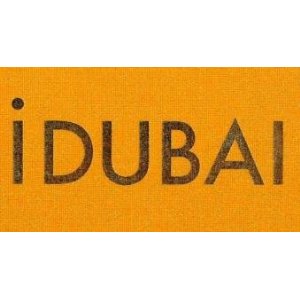 JTF (just the facts): Published in 2010 by Steidl (here). 96 pages, with 243 color images. Includes an essay by Jonathan Crary. All of the images were taken using an Apple iPhone camera. The book itself is small, thin, and rectangular, with the images printed in sets of three per page, each picture roughly the size of an iPhone display. The book is covered in gold sparkled cloth, with a huge gold bar code on the back. (Cover shot at right, via Amazon.)

Comments/Context: If you take a step back and look at Joel Sternfeld’s photography over the past decade or so, human sustainability, in the form of how we live our lives, comes back again and again as an undercurrent of exploration. He has documented utopian communities, delegates at climate change conferences, and the subtle nuances of his local Massachusetts landscape (review here). His newest collection of work, found in the book iDubai, takes these ideas even further, via the ubiquity of his mobile phone camera. It is a sustained indictment of consumption as a way of life, a penetrating critique of the excesses and rootless materialism of modern living.

Virtually all the images in this book were taken inside one of Dubai’s many over the top shopping malls, where marble floors and glass elevators connect an endless stream of affluent shops, food courts, and indoor entertainments. Basking in the glow of gaudy fluorescent lights, his subjects wander around in a trance, alternating between boredom and apathy, slumping listlessly in pre-arranged seating areas or emotionlessly pushing strollers and shopping carts from one artificial diversion to the next. His pictures document the apex (or ultimate limits) of globalization, where men in robes and headscarves can go bowling, shop at IKEA, get a sandwich from Subway, and take their kids to the Elmo show. After we get past the initial surprise of seeing Middle Eastern families juxtaposed with Western commerce, the pictures take us back to a relentless sameness, the stale, ordinary, mindless repetition of teen fashions, luxury jewelry, and high-end coffee that has blanketed the world.

When the first handheld cameras were introduced many decades ago, many ridiculed them as toys, but some artists found freedom in the movement they allowed and discovered new and exciting pictures that were enabled by the small form factor. We are now in the midst of a new revolution, where the mobile phone camera has empowered an entirely new generation of people to make pictures, and once again, the establishment has scoffed at what a “citizen journalist” might accomplish with such a dumbed down tool. Armed with his iPhone, Sternfeld has made his photographs with the ultimate consumer device, making himself part of the culture of aspirational consumption he is trying to document. He has clearly captured the feeling of his subject, leveling his criticism with sharp effectiveness. The question remains, however: are these great photographs?

In general, it would be hard not to characterize these images as snapshots, and given the sheer number of pictures included in the book, it seems the camera phone encourages a prolific approach to image making. More than any one particular image, iDubai is about the piling up of imagery into a larger whole, of catching hundreds of snippets of the story and weaving them together, of everything adding up to rich portrait of mall life. When Walker Evans made pictures with a Polaroid SX-70, even though the technology was wholly different than what he had used previously, the pictures he made still bore the hallmark of his eye. When Sternfeld uses an iPhone, the formal clarity that I associate with his view camera pictures is gone, replaced by a more fleeting attempt to resolve his compositions; his originality as a photographer seems to have been diluted by these “always on” tools – I can’t discern a signature Sternfeld look, even though the narrative as a whole coalesces strongly.

Overall, I think this is the kind of project that is most successful in book form, or when displayed as a dense, atmospheric installation of many images, where the whole is far more interesting and memorable than any one picture on its own. What I take away is Sternfeld’s view of how depressing, homogenized mall culture has permeated every corner of the globe, and how it creates a collective unreality where we lose sight of our connections to our communities. While this book is shiny and luxurious on the outside, it delivers a scathing censure of the global culture we are so actively building.

Collector’s POV: Joel Sternfeld is represented by Luhring Augustine in New York (here). At this point, Sternfeld’s work is readily available in the secondary markets, especially his most famous images (which have been printed in editions of 50 or even 100). In recent years, prices have ranged between $2000 and $100000, with a sweet spot for the greatest hits between $10000 and $30000.