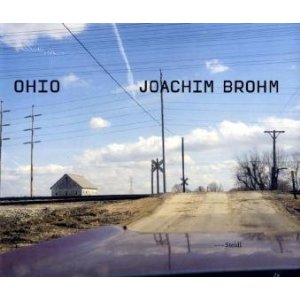 JTF (just the facts): Published in 2009 by Steidl (here). 120 pages, with 55 color images. Includes essays in English and German by Thomas Weski and Vince Leo. The images from this project were taken between 1983 and 1984. (Cover shot at right, via Amazon.)

Comments/Context: In the early 1980s, German photographer Joachim Brohm took a Fulbright year at Ohio State University in Columbus. This tightly edited monograph gathers together the work he made during his stay and introduces another voice into the discussion of the early development of color photography.

Brohm’s images of Ohio seem to have a mix of influences and connections (the celebration of vernacular American culture as captured by Walker Evans, the ugly underbelly of development as exposed by the New Topographics photographers, and the exploration of new color ideas by William Eggleston, Stephen Shore and Joel Sternfeld), all tied together and synthesized with a slightly more aloof German aesthetic. Most of these images have a dingy, muted palette, and have been composed at eye-level, with an almost snapshot-like directness. Brohm pointed his camera primarily at back alleys and forgotten urban landscapes: parking lots, chain link fences, dated cars, dumpsters, dog runs, and clusters of overhead telephone wires, pausing to take in the array of junk left on a dashboard, a rubble strewn vacant lot, an unused basketball hoop, a window reflection, a defunct drive-in, or a car engulfed in flames. The pictures are consistently understated and unassuming, but the guard dogs, Keep Out signs, cinder blocks and broken fencing leave a lingering sense of emptiness and subtle threat.

What I found interesting here is that if Brohm had made these pictures in black and white, they would have had a stronger sense of abstracted, formal elegance. But the introduction of the often drab, cheerless color has the effect of heightening the reality of the depressed mood of the environment; it’s not color for the sake of color, or color as an exercise in showing-off, but color masterfully used in a supporting role to achieve the desired temperament. Then look again, and suddenly, the red of a Cadillac tail light, the yellow of a dog house, the brown of a painted railing, or the pale green of a garage seem like perfectly calibrated eye-catching details.

For those of you busy praying to the pantheon of American gods of color, I’d thoroughly recommend taking a closer look at this body of Brohm’s early work, as it attacks many of the same aesthetic questions, but upon patient inspection, offers surprisingly different and satisfying answers.

Collector’s POV: Joachim Brohm is represented by Gallery Luisotti in Santa Monica, CA (here, on artnet) and Galerie Michael Wiesehöfer in Cologne (here). Brohm’s work has become somewhat more available in the secondary markets of late, particularly at the German auction houses. According to the notes in the back of the book, prints from Ohio are available in two sizes (24x30cm and 50x60cm) on Kodak Ektacolor paper (vintage) and Fuji Crystal Archive paper (modern).