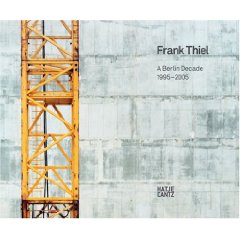 Comments/Context: German photographer Frank Thiel was an unknown for us prior to seeing his work for the first time at the recent Armory show. We were impressed by several of the large scale photographs we saw there, and bought this book to get ourselves up to speed on his larger body of work.

Most people know the highlights of recent German history: the falling of the Wall, the reunification of East and West, and the movement of the capital from Bonn to Berlin. What is perhaps less well known to outsiders and foreigners is that the reunification of the city (and country) led to a massive construction effort, both demolition of the old and building of the new. In joining the two cities once again, the entire fabric of the urban geography has been recently remade.

Thiel has spent the past decade documenting the architectural transformations going on his city, making wall sized images of both wide angle and close up views of destruction and construction. His pictures are full of cranes, scaffolding, bucket trucks, and temporary curtains. What he has chosen to pull out of these scenes of activity are the geometric patterns that lie beneath the perfect facades, often only visible during the building process. There are grids of rebar, intersecting lines of pipes, walls of tile, and repetitions of windows and concrete framing. Many of these pictures are extremely precise, meticulously aligned abstracted images of form and space. Thiel has also focused his eye on the deterioration and decay found in many of the older buildings. A series of peeling paint images recall Aaron Siskind and Minor White, but on a larger scale and infused with a spectrum of soft pastel colors.

What I found surprising in these images is that they are not particularly harsh or critical of the transformations being documented, as one might expect in our current age of skepticism and environmental awareness. Instead, these works have a little of the old 1920s/1930s romance in them, a more positive view of the efforts of man to make awe inspiring buildings; many of the close ups are in fact quite beautiful. Even the destruction shots have an underlying sense of optimism, a feeling that this new world could somehow be an improvement on the old.

Collector’s POV: Thiel is represented in New York by Sean Kelly Gallery (here). A show of new photographs will be on display at the gallery starting in May (and we will surely make a visit).

There have been so many pictures made recently of the construction boom all over the world, as a collector, it is often hard not to get confused about which images belong to whom. And while a few of these pictures have echoes of Andreas Gursky in them, most have an authentic and recognizably different point of view (much less cool and detached, even though these are straight pictures), even though the subject matter may be similar. Thiel’s work would fit very well into our collection, resonating with other city and industrial scenes we already own. The problem is that his work is universally way too large for our old Colonial home (low ceilings and small walls); we don’t have much use for a mural sized image that won’t fit through the doors. That said, I have very much enjoyed seeing more of Thiel’s work and look forward to seeing a larger group of his pictures hung together later this spring.

JTF (just the facts): A total of 15 black and white photographs, framed in silver and unmatted, and hung against white walls in the single room gallery space. All of ... Read on.