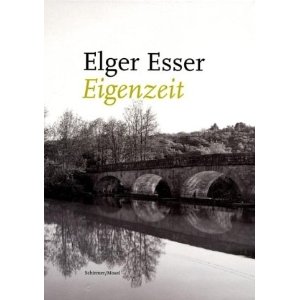 The works in the catalog have been divided into six groups, along with additional images by both Esser and other artists reproduced amongst the essays:

Comments/Context: Having carefully reviewed this catatlog from the recent retrospective show of Elger Esser’s work at the Kunstmuseum Stuttgart, I’d like to think that I have finally begun to understand a photographer who has puzzled me for years. Part of my problem as a viewer of Esser’s work seems to have stemmed from some preconceived and now obviously incorrect notions about what the work of a Becher student from Düsseldorf was “supposed” to look like and how landscape photography could or should incorporate conceptual methodologies. When placed in the context to Gursky, Ruff, and Struth, I could never seem to see how Esser fit, or really even come to grips with what he was trying to accomplish.

This book gathers together a representative sample of his work from the past two decades, and so provides a mix of images from different projects, all placed together in the larger framework of his aesthetic approach. While I had always recognized the allusions to the conventions of Romantic painting and 19th century photography in his monumental washed out yellow seascapes and cityscapes, I had never really seen the connection between these works and his recent blown-up seaside postcards of shipwrecks and crashing waves or his seemingly unremarkable black and white village scenes executed in perfect heliogravure.

I can now see that Esser’s works all revolve around an exploration of time and memory, always with a touch of melancholy for what has been lost along the way. Some of the works echo Proust, and look for contemplative moments of timelessness; others follow the thin thread of a forgotten narrative, only to be left with the essence of the moment, not its details. In all of Esser’s works, he has rigorously recaptured approaches to picture-making (both compositional and technical) that look backward, and then updated, synthesized, and executed them using today’s photographic tools. As such, their conceptualism is a bit more concealed, requiring some additional patience and quiet consideration to discern the patterns and relationships; this is one case where a bit of education about the artist’s intent goes a long way toward enhancing the viewer’s overall understanding of what hangs on the wall.

While I still enjoy Esser’s yellow riverfront cityscapes and open seaside vistas most, this catalog has provided both a much needed roadmap of where Esser has gone since and a lucid explanation of how these newer works reflect on the foundational themes he has been wrestling with for years.

Collector’s POV: Elger Esser is represented in New York by Sonnabend Gallery (here) and in Paris/Salzburg by Galerie Thaddeus Ropac (here). Esser’s work has generally been available at auction in recent years, typically ranging between $25000 and $75000 (with a few outliers). 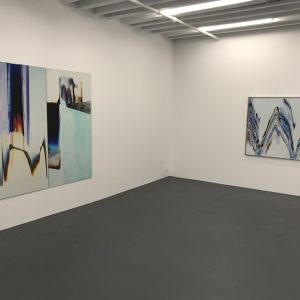 JTF (just the facts): A total of 11 large scale photographic works, alternately framed in silver and unmatted and mounted unframed, and hung against white and black walls in the ... Read on.