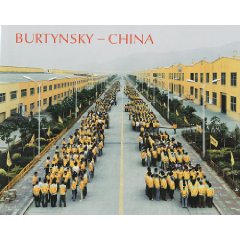 Comments/Context: Coming to grips with the prevailing view of industrialization, particularly in the developed West, has been an ever shifting and evolving topic for photographers of all kinds, for at least the past century. In the late 19th and early 20th centuries (right up through the 1930s or so), the exploits of man, in the form of skyscrapers, factories, railroads, dams, and steel mills, were bathed in a romantic glow, as we stood in awe and pride at our accomplishments, as the molten steel poured from the furnaces and the smokestacks rose into the sky. Many great American photographers, including Berenice Abbott, Margaret Bourke-White, Charles Sheeler, and even Edward Weston made inspiring images of our new industrial power. (EO Hoppe didn’t call his 1920’s book of photographs from across the country Romantic America by accident.)

By the late 1960s and early 1970s, this glow was beginning to fade, and the secondary and tertiary impacts of our industrialization (on our society and on our environment) began to become more apparent. Photographers like Robert Adams and Lewis Baltz were starting to ask hard questions about how our never ending consumption and growth were affecting the world around us, and the answers weren’t romantic or beautiful, they were harsh and dispiriting. At the same time in Germany, Bernd and Hilla Becher were taking a different approach to this industrialization, carefully and systematically capturing the seemingly endless variety of industrial structures that we as humans had built. And while there was beauty to be found lurking in these buildings, it was cool and disaffected, in a clinical and anthropological way. Recently, Canadian photographer Edward Burtynsky has continued this wave of more intense scrutiny of the realities of industrialization, making pictures that ask penetrating and complicated questions about the impact of our manipulation and destruction of the environment around us.

While Burtynsky has taken surprisingly beautiful photographs of industrial sites and wastelands all over the world, this group of pictures from China is particularly arresting, in that we are able to see the same movie we saw during our own industrialization over the past century, played again in fast forward and at a larger scale. Some have called what has gone on in China since 1949 “hypercapitalism“, but even this world fails to truly describe the staggering pace and scope of the industrial transformation that has gone on across China in the past few decades. To become the place where nearly everything the world needs is made, the very fabric of the nation has been (and continues to be) torn and rewoven.

The book itself is divided into separate sections based on the specific industrial activity being photographed (Three Gorges Dam, Steel and Coal, Old Industry, Shipyards, Recycling, Manufacturing, and Urban Renewal), and together, they create a compelling and interrelated portrait of just what is going on. Massive new industrial and manufacturing facilities are being built to meet world demand, causing new trickle down requirements, particularly for energy and labor. Literally millions of (anonymous) people have left the hinterlands and migrated to the coast to work in these factories, triggering a host of new pressures on the already overrun urban areas, including housing and waste disposal.

Burtynsky’s pictures are meticulously composed to highlight patterns of color and line that are found in these man-made environments. The images are taken with a large format camera, and as a result, are filled with exquisite detail. The result is an unsettling contrast between the singular beauty of the compositions and the underlying dysfunction that we all know is just beneath the surface. This tension between the technical quality and the ominous (and sometimes awe inspiring) undercurrent of the subject matter make the pictures work, especially when they are printed large (often 40×50). And even though the reproductions found in the book are relatively small, they are successful in giving the reader a sense for the craftsmanship of Burtynsky’s prints.

Collector’s POV: In the past few years, Burtynsky’s work has become more available in the secondary market, fetching between approximately $5000 and $35000, depending on the image and its size. Burtynsky is represented in New York by Charles Cowles (site here). While we can imagine adding a Burtynsky image to our collection, our challenge is that the work wants to be large and we generally prefer (and need) the prints to be small. We’ll just have to keep looking for just the right piece.

JTF (just the facts): Published in 2020 by RRB Photobooks (here). Hardcover, 152 pages, with 80 black and white photographs. Includes essays by Martin Parr, Jane Rogoyska, and the artist. ... Read on.