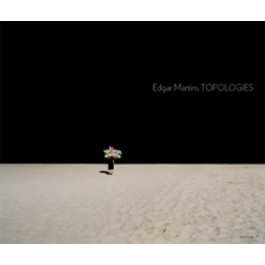 JTF (just the facts): Published in 2008 by Aperture. 136 pages, with 75 color prints. Includes an essay by John Beardsley and an artist conversation with David Campany. (Cover shot at right.)

Comments/Context: As our collector’s community grows, it seems more and more opportunities are arising to leverage the distributed knowledge of the crowd in the search for great photography. Based on a recommendation by one of our readers, we picked up this book by Portuguese photographer Edgar Martins, which must have sailed past unnoticed when it was released last year.

For an “emerging” photographer, Martins certainly has a large number of projects going on; this volume is a sampler of sorts, covering five different and wholly distinct series, all taken in a prolific three year time period. The common threads that appear to connect these disparate projects lie below the surface a bit: the use of a large format camera, a tendency to strip down the compositions to elemental forms, and an undercurrent of chance and drama that injects a sense of excitement.

The 2005 series Hidden focuses on the patterns made by roadside sound barriers. The rectangular blocks of color, repeated and mixed together, are displayed in a pared down, Minimalist landscape of unmarked road and and clear blue sky, recalling the sculptured boxes of Donald Judd and the color charts of Gerhard Richter.

The images from The Rehearsal of Space (2005 and 2006) chronicle the active devastation of Portuguese wild fires. While the scenes of leaping flames have an inherent theatricality, I actually prefer the landscapes which are engulfed in timeless smoke, the lingering haze adding mystery and uncertainty to what would otherwise be relatively straightforward forest studies.

The 2006 series Approaches finds Martins out on airport tarmacs and taxiways, taking pictures both during the day and in the depths of night. I especially liked the images which pick up the painted lines and patterns in bright white and yellow on the runways (reminiscent in some ways of Walker Evans’ late Polaroids of arrows and other street markings). Truth be told, I’d like to see a whole book of these particular works, especially those that highlight the geometric and graphic qualities of the paint against the deep black background; a very cool project indeed, and one worth further exploration in this collector’s opinion.

The series Landscapes Beyond, The Burden of Proof (2006 and 2007) captures the rugged terrain of Iceland. These landscapes have an “Olafur Eliasson meets Timothy O’Sullivan” feel, the harsh, rocky land and ice photographed with a very 19th century formalist approach to composition.

My favorite images from this volume come from the series The Accidental Theorist (2005-2007). In this project, Martins take long exposure night pictures of deserted beaches, each image a pairing of the deep rich black of the night sky with the soft tactile indentations of the sand, punctuated by seemingly random objects (a girl with balloons, an umbrella, trash bins, stacks of chaises, and an array of strange poles that reminded me of Walter De Maria’s Lightning Field, among many others). The careful bisection of the picture frame and the overall Minimalist approach recall Hiroshi Sugimoto’s night seascapes (with a side order of Harry Callahan’s Cape Cod beach pictures), but these images have a sprinkle of serendipity that makes them less overtly meditative and more pleasantly puzzling.

Overall, this book is evidence that Martins is clearly an accomplished photographer early in his career, who is pursuing his craft with intellectual rigor and abundant activity.

Collector’s POV: Edgar Martins is represented in New York by Betty Cunningham Gallery (here) and in Los Angeles by Kopeikin Gallery (here). The prints are made in two sizes (not sure of the exact dimensions), in editions of less than 10, with prices starting at $5000. There is no secondary market for Martins’ work at this point, so interested collectors should follow up with one of the retail galleries directly.