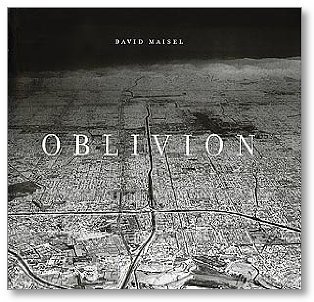 JTF (just the facts): Published in 2006 by Nazraeli Press (here). 48 pages, with 15 black and white images. Includes a poem by Mark Strand and essays by William L. Fox and David Maisel. (Cover shot at right.)

Comments/Context: While we would like to think that collectors and photographers find each other through some efficient meritocracy of affinity, the reality is that nearly all collectors are scouring around looking for works that catch their eye, and a significant degree of random chance and accident often come into play. In this particular case, I think we saw this book when it first came out and flipped through it at the Strand or elsewhere, thinking it was pretty interesting, but not actually purchasing it at that point. We then visited an online exhibit of the work at the JGS Forward Thinking Museum (here, recently redesigned) a year or so later, and were again impressed by what we saw. It wasn’t until a month or so ago that we actually bought the book, after sitting down and thinking about work we had seen over the past few years that we wanted to explore further and write about for this site. So here we are, with a review of a book most people reviewed in 2006, a slow progression of repeated positive encounters bringing us together now.

The seemingly endless sprawl of the city of Los Angeles and the unique human culture that has grown up in this environment have been rich material for many photographers. In particular, its vast miles of housing developments and freeways have been repeated subject matter for aerial photographers who have been fascinated by the patterns made in the landscape by the built structures and forms.

While David Maisel’s images in this book are part of this larger history, they have a look and feel that is altogether different than Ed Ruscha’s views of parking lots. The obvious difference is that Maisel’s works are negative prints, with the black and white tonalities reversed, creating unsettling views that upend our conventional wisdom about what shots from the air are supposed to look like. What I think is more provocative is that using this ashen palette, Maisel has selected perspectives and compositions that heighten the sense of foreboding and anxiety embedded in the landscape (long shots where the individual buildings become a dense carpet, and closer up views where the white shadows fall in unexpected directions). Others have commented on how these images resemble military surveillance or night vision pictures, and indeed there is a bleak paranoia that pervades all of these works.

To my eyes, the formations and designs in the images most resemble the results of some biology experiment gone wild, where the self replicating mechanism has been unleashed, creating alternately rigid structures that mimic semiconductor circuit diagrams and more organic films that take after microscopic mold growing in a petri dish. As such, the images became thought-provoking vignettes of what indeed a massive human city like Los Angeles really is, engineered on a desert platform with borrowed water, and what it might mean to be a single individual eking out a life in this outrageous place.

Collector’s POV: David Maisel is represented by Von Lintel Gallery (here) in New York, along with several others around the US. The works from Oblivion are 40×40 c-prints. These impressive images would fit extremely well into our collection (juxtaposed with other city scenes across the history of the medium), but as usual, the problem is that they are much too large for the constraints of our display space.