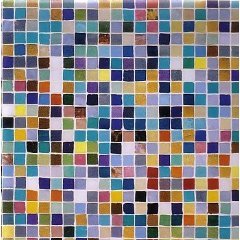 Comments/Context: Last week, I posted an opinion piece on the idea of “local” or regional photography, of photographers turning back to their own communities for inspiration, rather than repeating the same themes drawn from bland globalism. Los Angeles based photographer Anthony Hernandez is an excellent example of staying rooted in a single environment, and over time, uncovering its subtleties and nuances. He has, of course, made pictures in other cities and locales, but it is his Los Angeles works that have the most resonance for me.

Collectors will likely be most familiar with Hernandez’ 1970s and 1980s black and white work depicting the gritty streets of LA, bus stops and body shops, vacant lots and urban waterways, later contrasted with the shoppers on the sidewalks of Beverly Hills. More recently, Hernandez has moved to a square format, using color and close up framing to create more abstract images with all over patterns.

The fragments Hernandez has selected all relate to the idea of waiting: welfare offices and other public spaces, thick with the air of bureaucratic indifference. There are tile walls and corrugated concrete, loudspeakers and barriers, official notices and torn telephone books. There are also the less obvious signs of human habitation: cigarette butts and orange peels, stains, scrapes and smeared hand prints.

These isolated fractions and remnants work on two levels: on the abstracted plane of line, form, and color, interacting to create striking geometric designs and motifs, and deeper down, at the personal level, depicting the often dispiriting touch points of a world we don’t often see or have failed to notice.

Overall, the work is this book is consistently excellent, and I think this comes as a result of both keen attention to craft, as well as from the careful eye of an artist probing a subject he already knows well.

Collector’s POV: Anthony Hernandez is represented by Christopher Grimes Gallery in Santa Monica (here) and Galerie Polaris in Paris (here). I couldn’t find any New York representation for his work, so please add it in the comments if someone has further information. There have been very few Hernandez works sold at auction in the past few years, mostly prints from the Pictures of Rome series; in general, prices have varied between $1000 and $7000. For our collection, the images from this book would fit extremely well in our city/industrial genre, but at 40×40, they’re unfortunately once again too big.