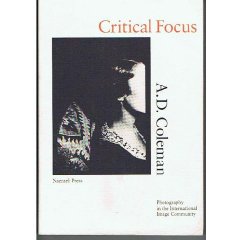 Comments/Context: If there is one thing that writing this blog on a regular basis has done for us, it has made us far more attuned to the quality and quantity of photography reportage and criticism out there in our media sources. We notice with much more care what shows Vince Aletti is covering for the New Yorker and how he is writing about them; the same can be said for Jerry Saltz in New York magazine, or the team of folks covering the arts for the New York Times. From there, it’s a pretty sharp drop off to regional and international newspapers, to photography and art magazines of various kinds, and more recently, to the blogosphere. The unfortunate reality is that, save a few bright spots, the overall state of the world of photography criticism is pretty underwhelming on the whole (this is perhaps a myopic, New York centric view of the world I realize).
Given this situation, it is with significant pleasure that I have been going back and working my way through the photography criticism of A.D. Coleman. This volume covers a period in the late 1980s and early 1990s, and shows Coleman actively trying to expand his horizons beyond the traditional American photo scene. While his essays are primarily rooted in New York, he travels to Prague and Lausanne, Arles and Amsterdam, Jerusalem and Goteborg, as well as all over the United States, in search of interesting photography to write about. He visits fairs and expos, large museum shows and out of the way galleries.
While this particular period in history includes the various scandals surrounding the work of Mapplethorpe, Serrano, Sturges, and Mann (all of which he dissects masterfully), the book centers on the parade of exhibits and shows of those years, featuring Sherman, Sugimoto, Misrach, Witkin, Goldin, Winogrand, Boltanski and Wegman, among many others. There is also the palpable sense that photography had quickly become much more international, and that artists from all over the globe were now garnering well deserved attention. While at one level, Coleman’s essays paint a picture of a remarkably stable universe of photographers of merit (many of these are still the ones we’re talking about today, twenty years later), at another level, exposure to the broad base of the medium internationally was clearly widening. So while a few of the essays have a time capsule feel to them, the majority have a continued freshness and relevance, regardless of their age.

I have thought quite a bit about what it is that sets Coleman’s criticism apart from the rest of the field. It cannot be that he was the first to report anything, that he got the scoops or exclusives, or that his description of the facts was particularly more detailed or thorough. My conclusion is that he paired a high standard for the craft of his writing with a true and genuine commitment to the medium of photography. While all criticism is full of opinions, his were built on the twin foundations of thorough and meticulous analysis and deeply felt enjoyment of pictures of all kinds. What I particularly admire is that he is able to be honest and unmerciful, to take a stand without degenerating into name calling or overly clever potshots. This is a solid collection, well worth your time.

A.D. Coleman’s website, The Nearby Cafe, can be found here.
Collector’s POV: For many of the years we have been collecting, we didn’t read much photography criticism, likely because we were quickly tired of the pompous, art-speak that drags down a large percentage of monograph and exhibition essays. Coleman’s columns were like a breath of fresh air for us. If you have been wary of reading photo criticism (assuming it would be dry and boring) or haven’t picked up a book of essays for a decade or more, we highly recommend choosing one of Coleman’s collections. You’ll find you like critical writing more than you thought.
Twitter| Facebook|