JTF (just the facts): A small group show containing the photographic/video work of 6 artists/photographers, variously framed and matted, and hung against white walls in the single room gallery space. The exhibit was organized by Amanda Hunt.

The following artists/photographers have been included in the show, with the number of works on view, their dates, and their processes as background:

Comments/Context: While hard working horses and the men that ride them have been deeply entrenched symbols for centuries in countless cultures across the globe, the American cowboy has evolved into his own special kind of mythical figure. Born on the ever expanding national frontier of the nation’s early years, steeled on the ranches and cattle drives of West, and celebrated in the sheriffs and outlaws of classic Hollywood movies, the American cowboy, in his hat and boots, his oilskin jacket, and his faded jeans and leather chaps, has over the years been streamlined into a universally recognized cliche of rugged self-reliant masculinity, where the glorious freedom of the untamed and unforgiving land is met by quiet reserve and romantic toughness.

Artistically, this uniquely American character has been chronicled by many photographers, particularly in the Western states. Artists like Kurt Markus and Hannes Schmid (and his more famous appropriator Richard Prince) have visually unpacked and repackaged the cowboy myth, both bringing us inside the dusty day to day work of herding and ranching and then extending those scenes into a cleaned up commercialism that embodies the underlying traits outsiders want to attribute to cowboy life. And while the lives of Hispanic Americans, Native Americans, and African Americans have all been inextricably interwoven with (and in many cases irrevocably damaged by) the settling of the American West, the American cowboy, at least in myth form, has been almost universally white-skinned.

Which brings us to this smartly edited exhibit, Black Cowboy. This show isn’t a historical survey of the many overlooked contributions of African American cowboys or an argument for the rightful merit of Westerns starring Sidney Poitier or Jamie Foxx. Instead it considers a more contemporary definition (or redefinition) of the role, often with a more urban context than we might normally associate with stereotypical cowboy life.

The centerpiece of the show is Mohamed Bourouissa’s superlative film, Horse Day. Shown on two interleaved screens, the work chronicles the lives of horse riders in West Philadelphia, culminating with an annual skills competition and barbeque. And while we might be tempted to apply the label of “cowboy” to these young men, they certainly don’t fit any genre or stylistic mode we might expect – in fact, they largely reject the term entirely, opting for the more neutral “horseman” when talking about themselves. Like their counterparts in the West, the tender attentive care of their horses and the hours of dedicated training and human/animal teamwork are the same, but it’s the external trappings here that are different – the sneakers instead of boots, the graffiti covered metal trailer, the hose wash down on the sidewalk instead of in the stall. Perhaps the most surreal moment in the film comes when two guys go for the urban equivalent of a trail ride, slowly clopping their way through abandoned warehouses and across empty streets, with traffic passing on busier blocks and tricked out cars idling nearby – the scene is incongruous in the best sense, at once altogether unbelievable and somehow doggedly determined. When the party finally occurs, the event is filled with various challenges (obstacle course, free style, etc.) that take place on a scrubby wide open green space, interspersed with the energetic flavor of local drum bands, cheering spectators, and well-earned trophies. The horses and riders are decorated with careful improvised flair, with horse “armor” made from stitched together CDs and shirts/headdresses made from shiny streamers, all designed with the requirements of trick riding (and crowd pleasing) in mind. Bourouissa does an intently nuanced job of visually unfolding this unlikely story, leaving us with the optimistic conclusion that even in a poverty-stricken urban neighborhood, the understated joys of horsemanship (and the life lessons it instills) can still flourish.

Ron Tarver’s photographs continue breaking down the geographic cowboy assumptions of wide open spaces, grand vistas, and dusty pastures, with color images of riders and horses in city locations. A horse lingers near the edge of a neighborhood basketball court while his rider shoots the ball, and black horsemen amble through the streets flanked by brick apartment blocks, stoplights, and red awnings. His best image mimics a walk through the tawny gold of an expansive grassland, except it’s the scrawny weeds of a vacant lot that provide the meadow and the towering visage of Malcolm X looks down on the scene from a nearby painted mural.

One of the other pillars of the cowboy myth is the assumption of limitless freedom, but Chandra McCormick disassembles that cherished idea with an image of a group of black men breaking wild horses. While such a scene might seem like the kind of image that would celebrate the thought of men taming nature, her photograph comes from the Angola State Prison Rodeo, where all the participants are inmates, so the proud freedom here is entirely ironic.

Two other photographers take a different path, exploring the clichéd look of a white cowboy and replacing it with something more reflective of black culture. Brad Trent’s black and white portraits of members of the New York chapter of the Federation of Black Cowboys are full of black hats, long black coats, beards, and dark sunglasses, bringing a tough modern swagger to the typical cowboy style. Then Trent goes one step further, including a portrait of a female black cowboy, her extra long dreadlocks trailing down from under her ten gallon hat, echoing the swish of the fringe on her coat. And Deana Lawson’s portrait of two black cowboys atop their horses pushes on the latent masculinity of the cowboy role, her muscular shirtless men (one with a bandanna covering his face, rustler-style) exuding a parallel version of the blunt sexy confidence we associate with dreamy movie star cowboys.

All this comes together as a measured and well argued disassembly of a common myth. Black Cowboy offers a clear counterpoint to our assumptions about what a cowboy is and represents, where he lives, and what he (or she) might look like, and that freshness of perspective gives this exhibit its punch. In just a few well chosen contemporary artworks, the show forces us to broaden and recalibrate our understanding of an American icon, making it more richly inclusive and representative of the diverse reality of what being a cowboy means today.

Collector’s POV: Since this is a museum show, there are of course no posted prices. As such, and given the spread of work on view, we will forego our usual discussion of secondary market pricing history and gallery representation. 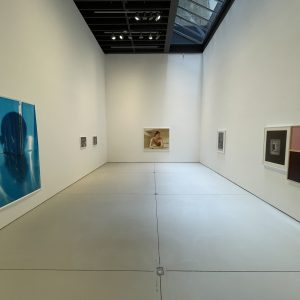 JTF (just the facts): A group show consisting of works by 18 artists/photographers, variously framed and matted, and hung against white walls on the three floors of the gallery. The ... Read on.