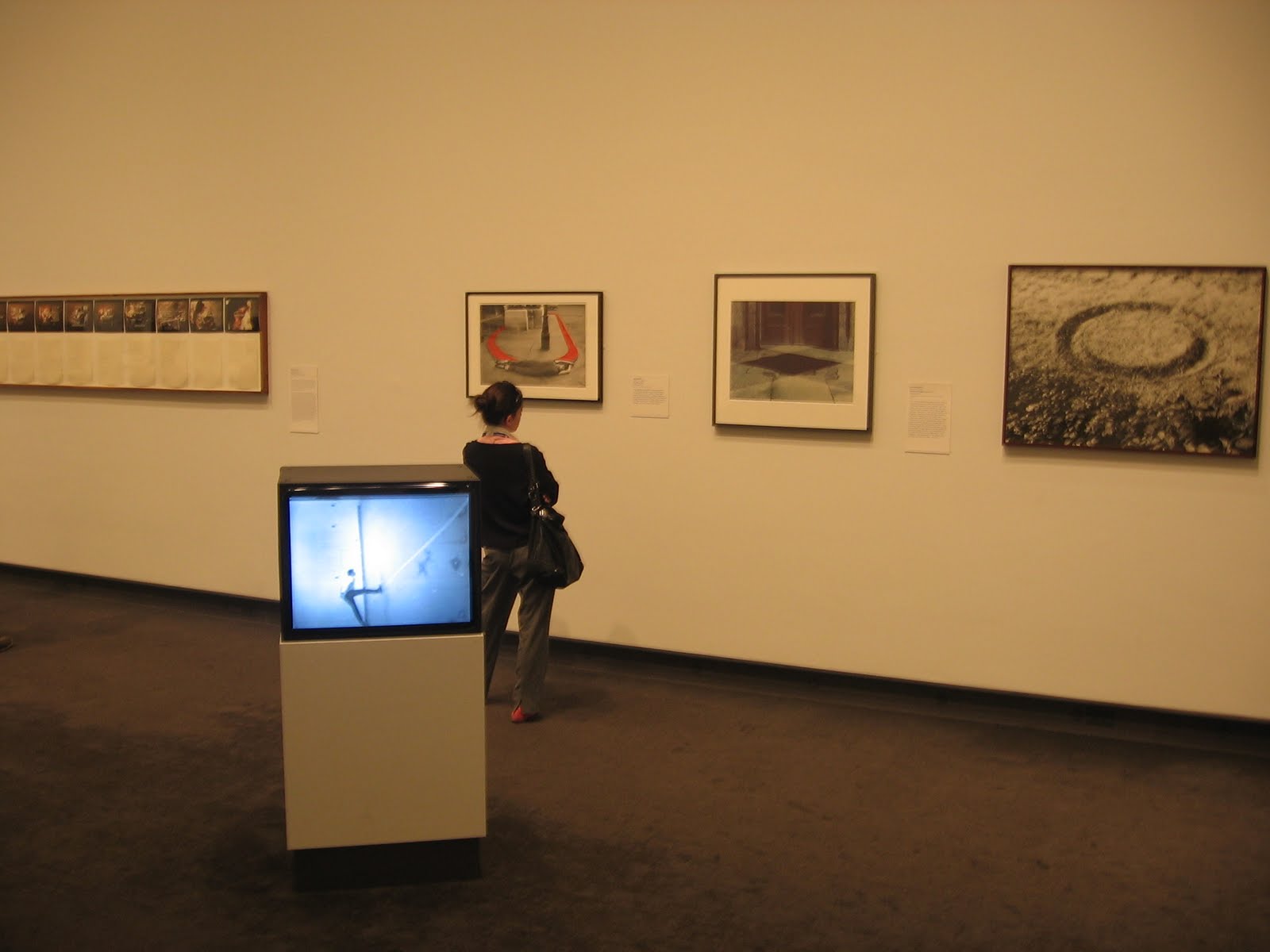 JTF (just the facts): A total of 31 works, in mixed frames and mats, hung in a single divided gallery on the 2nd floor of the museum. This group show includes images/videos from 24 artists and photographers, made between 1966 to 2009. All of the works on display have been drawn from the permanent collection of the museum; most were acquired in the last decade. (Installation shots at right.)

The following artists/photographers have been included in the exhibit, with the number of works on view in parentheses: Comments/Context: Apart from the times when the gallery has been subsumed into a larger exhibit (like the Pictures Generation), the Joyce and Robert Menschel Hall for Modern Photography on the second floor of the Met has become a consistent venue for thematic group shows, organized to highlight topics and subject matter of relevance to the practice of contemporary photography, almost always drawing exclusively from the museum’s permanent collection. It’s a low cost way to feature some terrific works which would otherwise be locked away in storage, to have a voice in the contemporary debate, and to providing some larger art historical context for some of the important ideas that are percolating around the community.
.
The newest iteration in this series takes on a broad intellectual construct that could loosely be called “travel”, but really contains many more abstract, amorphous and obtuse ideas: the elusiveness of place, the globalization of experience, the sense of being a refugee, the passing of time, and the dislocations and displacements that have become commonplace in our modern world. The first half of the exhibit goes back to the 1960s and 1970s and explores these ideas primarily through the lens of Conceptualism. Vito Acconci makes flash photos of audiences in theaters, On Kawara sends time stamped postcards, Ed Ruscha documents the Sunset Strip, and Bruce Nauman jitters across his studio.
. Fast forward a few decades, and dry, academic wit has been exchanged for a more pervasive, everyday globalism, less theoretical and more grounded in the nuances of what we now call normal. Doug Aitken peers out an airplane window, Thomas Struth captures a museum crowd studying a projection of a Delacroix, Weng Fen watches a bustling Chinese skyline, and Rineke Dijkstra follows the growth of a Bosnian refugee. My favorite piece in the show was Erin Shirreff’s Roden Crater, a video that appears to capture the changing light conditions at James Turrell’s famous monument. In fact, it is a series of still photographs of the crater, where Shirreff uses different glares and lighting effects on the surface of the appropriated image to create a startling spectrum of hues and colors; what looks like the smooth gradients of light waxing and waning across the hours of the day are in fact computer effects smoothing out the transitions between stills. Once you catch on to the trick (look for glare and surface grain), the inversion makes for a thoughtful comment of the experience of time.
.
The progression from the earlier work to the images from the past decade is quite jerky, a bit too “before” and “after”, rather than a building up and evolution of ideas. While everything does in the end connect into the larger thematic undercurrents of the show, this is the most cerebral curatorial effort we’ve seen in this gallery space; it takes some active thinking and wall-text parsing to bring it all together – I doubt that the wandering, fly-by viewer will succeed in teasing out all of the references.
.
While I certainly enjoyed seeing many of the works on display in this show, I remain unconvinced that these thematic exhibits are either memorable in a larger, long-term sense or successful in being a driving force in the contemporary dialogue. Part of this comes from holding the Met to a higher standard than most other venues, and part of it is a maddening sense of lost opportunity, of fantasizing about what could have been shown in this space in these long blocks of time that might have really been spectacular. All in, this is a thoughtfully constructed and generally well-executed effort, it’s just that I continue to hope for more. Collector’s POV: There really weren’t too many great fits for our specific collection on view in this show. That said, I particularly liked Felix Gonzalez-Torres’ intimate image of a chain link fence and strips of barbed wire across a grey sky from 1985.
Rating: * (one star) GOOD (rating system described here)
Transit Hub:
Between Here and There: Passages in Contemporary Photography
Through February 21st
Metropolitan Museum of Art
1000 Fifth Avenue
New York, NY 10028
Twitter| Facebook|