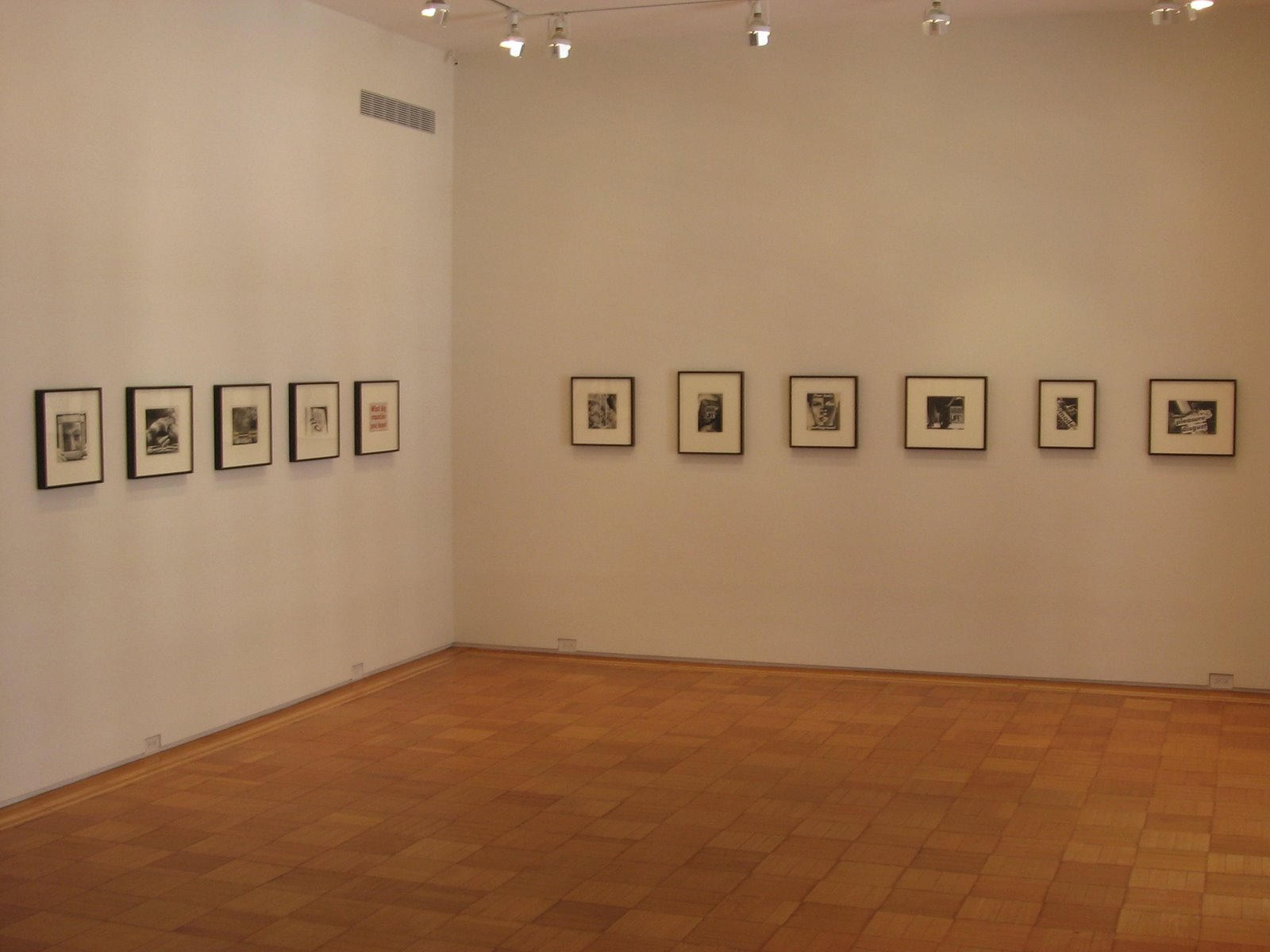 JTF (just the facts): A total of 44 collages and 1 silkscreen painting, shown in the first floor and two second floor galleries (North and South). The collages are made of photographs and cut out type, mounted to paper. They are framed in black and matted, and are generally 10×8 or smaller, with a handful of works approximately 10×14. All of the works were made between 1980 and 1992. (Installation shots at right.)

Comments/Context: Even after twenty years of time to age gracefully, Barbara Kruger’s collages from the 1980s still seem aggressively confrontational and bitterly ironic. While her work in recent years has been predominantly enlarged to billboard and wall sized murals that seem to shout their penetrating slogans, these smaller early pieces have a more hand crafted personal feel and expose more of her working process. Most of her collages started with a symbolic photographic image, often dripping in Cold War noir. Kruger then cut and pasted words and phrases in a clean typeface (both white on black and black on white) straight onto the images, sometimes adding other graphic elements, like lines or borders. The result was an attention grabbing montage of words and pictures, steeped in the styles of product advertising and political propaganda.
While collage and photomontage went through periods of great activity during the first part of the 20th century (think Hannah Höch and her feminist/Dada collages and the Russian Constructivist posters and collages of Klustis, Lissitzky, and Rodchenko), the form seems to have been consumed by the graphic designers and advertising creatives of the 1940s, going somewhat dormant as an artistic mode until Kruger came along decades later and co-opted the clichés for her own purposes. While it is a relatively simple idea to take a single image and make it more potent via the use of a clever caption, it is the consistent quality of Kruger’s execution that is clear from this show. In work after work, the juxtaposition/contrast of a strong visual with tightly edited, sparse prose leads to incisive commentary and spontaneous combustion. Here are a few of the most memorable phrases:
We are the objects of your suave entrapments
Admit nothing. Blame everyone. Be bitter.
It’s our pleasure to disgust you
You are not yourself
Who will write the history of tears
Your moments of joy have the precision of military strategy
We are astonishingly lifelike
Your body is a battlefield
Even in our oversauturated world of media, Kruger’s 1980s collages still have enormous energy. While some of the topical questions may have changed, the works themselves have aged extremely well.
Collector’s POV: The works in this show are priced between $35000 and $45000; the large silkscreen is not for sale. I think these early Kruger collages will end up being considered iconic, ground breaking works from the 1980s, especially since they show the hand of the artist. While they don’t fit into our collection, this is a tremendously thought provoking and challenging show, well worth a visit before it closes.
Rating: ** (two stars) VERY GOOD (rating system described here)
Barbara Kruger, Pre-Digital, 1980-1992
Through April 18th
Skarstedt Gallery
20 East 79th Street
New York, NY 10075
Twitter| Facebook|

Juan Brenner, The Ravine, The Virgin, & The Spring