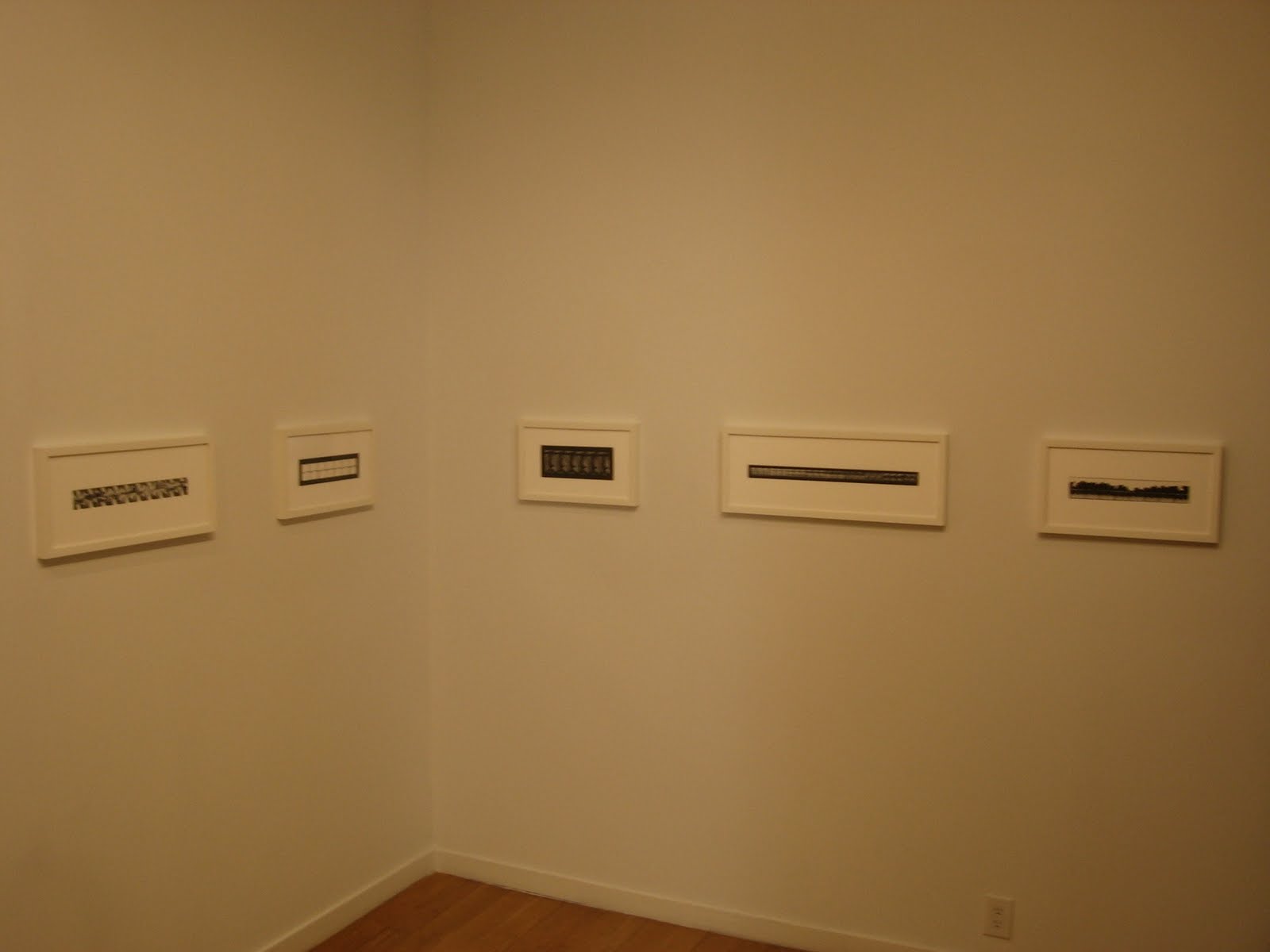 JTF (just the facts): A total of 13 black and white images, framed in white and matted, and hung in the small single room gallery space. All of the works in the show are vintage gelatin silver prints, in editions of 3 to 5, taken between 1969 and 1975. The images are generally elongated horizontal rectangles, ranging in size from 1 to 9 inches in height and 10 to 22 inches in length. (Installation shots at right.)

Comments/Context: At first glance, Barbara Crane’s Repeats look like regular film strips or contact sheets, multiple similar images one after another. But upon closer inspection, something altogether different and more complicated is revealed, taking the resulting works much deeper into the realm of abstraction. In each image, small pictures have been meticulously selected and laid out, often in exact copies or subtle variants/series, and printed in strips that are arranged in several layers (on top of each other, upside down, mirrored etc.).
The effect is that the shapes and forms found in each small image are transformed into intimate patterns and delicate repetitions. Tar spills on a roadway become paper dolls with linked hands, swooping highway flyovers become a swirling psychedelic optical wiggle, and straight tree trunks in the snow become a zipper. Metal rowboats, laundry on a clothesline, shadows of leaves and branches, and even a traditional mountain vista are all painstakingly transformed into contrasty fugues of theme and variation.
We can go all the way back to Muybridge’s 19th century locomotion studies or Grand Tour multiple image panoramas of famous ports and cities to give these works some historical context; the idea of using multiple frames to construct a larger narrative goes back to the beginnings of the medium. Crane’s studies at the ID in Chicago under Callahan, Siskind, and others were also clearly influential in the development of the ideas that underlie these particular works; there is marked resemblance/debt to both Siskind’s abstractions and Callahan’s multiple exposure images, although taken in a new direction by Crane and refined into a different mode of seeing.
.
What I like best is that the prints work at two different distances: from afar, they are entirely abstract exercises; up close, they resolve into specific content that is only discovered after investing effort in really looking. (This is show that works extremely well in a small space, as each work requires one-on-one, eyes to the frame inspection.) While Crane’s images were made in the analog 1970s, I think the foundation concepts that form the framework for her approach here have significant relevance to the digital age, where multiple images can now be stitched together with much more ease. All in, this show is worth a visit, for both the luscious craftsmanship and conceptual ideas embedded in the artworks on display, and also as a directional signpost for areas of potential exploration in the contemporary digital world.
. 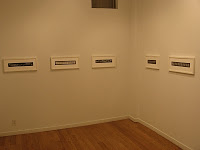 Collector’s POV: Each of the vintage prints in the show is priced at $4000. Crane’s work has not been widely available in the secondary markets in recent years; very few of her prints have come up for sale, and therefore, there is little credible price history for collectors to reference. Barbara Crane is also represented by Stephen Daiter Gallery in Chicago (here).
While these works aren’t a direct fit for our particular collection, I certainly enjoyed Dan Ryan Expressway, Chicago, 1975, and can imagine a thought provoking pairing with a few of Catherine Opie’s California freeways.
Rating: * (one star) GOOD (rating system described here)
Transit Hub:
Barbara Crane: Repeats
Through January 30th
Higher Pictures
764 Madison Avenue
New York, NY 10065
Twitter| Facebook|