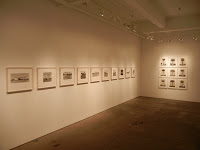 JTF (just the facts): A group show consisting of work by three photographers/pairs, hung in the single room, main gallery space. There are 20 photographs by Lewis Baltz from his series New Industrial Parks Near Irvine, California, all 12×16 vintage gelatin silver prints from 1975, in editions of 21. These works are framed in grey and matted, and hung as a single gridded group in one corner of the gallery. There are 2 typologies by Bernd and Hilla Becher. One includes 9 images of water towers, each individual gelatin silver print 22×18; the negative dates were not available, but the typology itself was assembled in 2010 and is unique. The other includes 12 images of winding towers, again each gelatin silver print 22×18; these works were taken between 1966-1989, and assembled in 2004. The Becher typologies are individually framed in white and matted. There are 5 works by Ed Ruscha: one portfolio of 10 images (Gasoline Stations) and a group of 4 prints from his series of aerial parking lots. The portfolio consists of gelatin silver prints, each 20×23, made in 1962/1989, and printed in an edition of 25. These works are framed in blond wood with no mat. The other four images are also gelatin silver prints, but 23×23 in size, from 1967/1999, in editions of 35. These works are framed in grey and matted. (Installation shots at right.)

Comments/Context: As quite a few gallery owners I know will attest, I have been struggling of late with what I call “the tyranny of the new”. This is a disease which afflicts many; its symptoms include the constant search for the new high, at the expense of recognizing the true value of the quality work that has come before but now seems like old hat because we have become used to its pleasures. Since I see a lot of both new and old work, I find that I must try not to compare apples to oranges, and instead force myself to see each show on its own merits, without this filter of the freshness of the new. It’s quite a bit harder and more nuanced than you may realize. This fine show is a perfect example to demonstrate this phenomenon. Here we have a group show of three recognized masters of 1960s/1970s conceptual photography, collecting together icons of important (and valuable) work from that time: Becher water tower typologies, Baltz New Industrial Parks, and Ruscha gasoline stations and parking lots. Taken at the level of pure facts, what could be better than this? If you’ve never seen this work, and you’ve recently arrived from another planet, this show should and will blow your mind. At the time of their making, these were astonishingly innovative works, and they continue to be strongly resonant and influential many decades later.

But since I have been infected with the tyranny of the new, I am embarrassed to admit that I had a “yeah, yeah, yeah, and so what” kind of reaction to this show. I shudder to say such a thing in public, but it’s true. I don’t think this grouping of greats adds much to what we already know about this time period or offers any new ideas, relationships, or interpretations of the art on view. It just hangs these spectacular images on the wall. Shouldn’t we all just bow and genuflect? This is not to say that I didn’t thoroughly enjoy this show, I did; I just didn’t get that infusion of new that I have come to crave, and so I was left a little (yikes) unsatisfied.

Such a conclusion is deeply troubling to me. How could such a show of brilliance fail to jump start my brain? Have I become so jaded that I can’t really “see” these treasures anymore? Clearly, I need to recapture some of that wonder I had when I saw my first Becher typology and I stood transfixed for what seemed like an eternity, or those hours I spent slowly paging through Baltz’ NIP, page by page, savoring the tiny subtleties of each and every image. Those joys are still there, right on the wall, for all to see; I just need an inoculation that will empty my brain of this agonizingly manic “what’s new” impulse and return me to a more balanced and less time-relative examination of the truly extraordinary in the world of photography. Collector’s POV: The prints in this show are priced as follows. The Baltz images were marked NFS (not for sale), although some may have been available individually if one was to inquire further. The Becher typologies were priced at $120000 (water towers) and $140000 (winding towers) respectively. The Ruscha portfolio (gasoline stations) was $175000, and the individual parking lot images were either $8800 or NFS. The work of all of these artists can regularly be found in the secondary markets as well. Individual Baltz images have recently traded hands from $6000 to $26000, while Ruscha’s prints have ranged between $5000 and $19000.  And Becher typologies (from diptychs to larger groups) have sold at auction between roughly $25000 and $175000 in recent years.

While I have a nearly infinite supply of appreciation for Becher typologies, I suppose I was most excited by seeing such a broad selection of Baltz vintage images from NIP, which tend not to be seen together quite as often. It would be shockingly easy to choose one for our own collection.