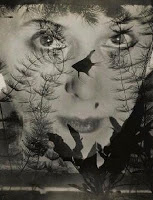 Preceding its various owner photographs sale in Paris next week, Sotheby’s has a single artist sale of the work of German photographer Heinz Hajek-Halke on offer. Most of the works in the auction are experimental photomontages and avante-garde multiple negative images, with a heavy dose of double/layered nudes and portraits, most made between the late 1920s and the 1950s. Overall, there are a total of 78 lots available, all by Hajek-Halke, with a Total High Estimate of 625000€.
.
Here’s the breakdown: