JTF (just the facts): A total of 18 color images, framed in white with no mat, hung in the main gallery space and the small side alcove. The works are digital c-prints, in two sizes: 24×30 (in editions of 10+2AP) and 30×40 (in editions of 3+2AP). The show includes 17 images in the small size and 1 in the large size; all of the works were made between 2005 and 2008. 12 of the images can be found in the book Domesticated, published by Photolucida (here), and available from the gallery for $24. There are 6 new images (not included in the book, but part of the same series) on view as well. (Marginal installation shots at right.) 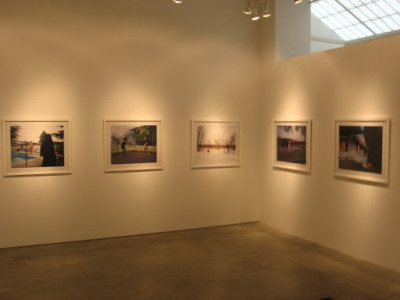 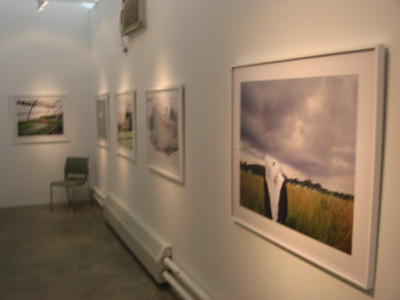 Comments/Context: The scenes depicted in Amy Stein’s Domesticated series chronicle the borderlands of the human and animal worlds, the places where two previously separate habitats now overlap and rub together, forced into precarious proximity by the encroachment of civilization on untamed nature: wolves are in the garbage, bobcats lounge on a construction site, bears are near the swimming pool, and deer are in the greenhouse and underneath the window. The images are full of confrontations and tests, separations and boundaries, anxiety and curiosity, both sides keeping a wary distance, and watching carefully.

It has already been well publicized that Stein uses stuffed animals (taxidermy) to create her diorama-like stories; these are not documentary photographs of real life events, but re-enactments of incidents and memories culled from conversations with residents of a small town in Northern Pennsylvania. This is I think a critical piece of information for understanding these works; documentary images of these same events would look different; they’d be messier, or too fleeting to have been captured at all, or most likely, the real thing happened in an altogether less interesting manner.

So what we actually have in these photographs is the recreation of memory and the embellishment of tales and legends told again and again. This kind of thinking on the part of the artist seems highly rooted in the history and practice of painting; much less so in the realm of photography (particularly “straight” photography). And so while it is relatively straightforward to see narrative and stylistic parallels with the work of Jeff Wall or Gregory Crewdson or even certain film makers here, I think the more interesting connections are to be made to painting, both in the process steps of formulating an image from memory and transferring it into a more easily digestible and compact form, and in the borrowings and echoes of art history, of allegorical works, and of fables, myths and fairy tales. Stein’s works are a synthesized reality, carefully composed for maximum narrative effect. The whole project shouts 19th century painting to me, even though the images have been executed by a contemporary photographer.

While not every image in the show packs a punch, the overall theme of human/animal interaction is deftly explored from a variety of vantage points in these pictures, coming to a complex and nuanced set of conclusions; perhaps this why the book form has been so successful for this body of work (it has won awards from Critical Mass in 2007 and the New York Photo Festival in 2008). All in, this is a convincing first New York solo show. What I like best is that she seems to have found practical ways to connect photography to painting, and to leverage the strengths of both to generate some unexpected and satisfying outcomes.

Collector’s POV: The images in the show are priced based on size and location in the edition. The smaller prints range between $2500 and $5000; the larger prints start at $4500 (I’m not sure of the end of the edition price for the larger pictures). Stein’s work has no history to date in the secondary markets, so collectors will need to work within the gallery system to access her prints. For those on the West coast, Stein is also represented by Robert Koch Gallery in San Francisco (here).While Stein’s work does not fit into our specific collecting program, I particularly enjoyed seeing the image Backyard, 2007 (here), which eerily reminded me of Goya’s The Third of May, 1808 (here, in the Prado).