JTF (just the facts): A total of 42 color images, taken between 2000 and 2008, framed in blond wood frames, and displayed in a chopped up maze of five galleries, a hallway, and a reception area. Prints are either chromogenic or archival pigment prints, and come in a range of sizes from 16×20 to 50×40, with several intermediate formats as well. Most are in editions of eight, with a few in smaller (5) or larger (15) edition sizes. Gagosian Gallery does not allow photography in the exhibit rooms, so we have no installation shots for this review.

Comments/Context: Satirizing the now former President Bush has become so widespread, so common, and in some cases, so virulent over the past several years that it has almost become a cliche, the exaggerated jokes and astonishing truths mixing together to make a potent cocktail. Alec Soth has bypassed the easy potshots and obvious put downs in chronicling the last eight years, and has focused his lens on the more subtle and tenuous moments of recent history where the legacy of the Bush administration has spread like a dusty film over the lives of everyday Americans. 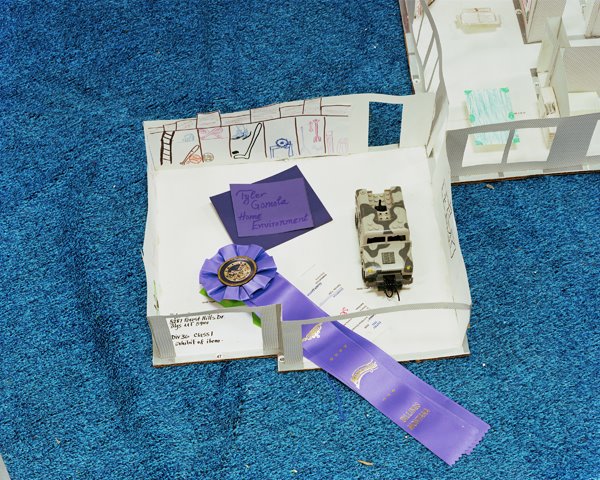 Soth burst onto the photography scene in 2004 with his book, Sleeping by the Mississippi, and has since published several more bodies of work and mixed in a full plate of commissioned projects as a member of Magnum. To our eye, Soth has successfully resisted categorization by pointing his camera at a wide variety of subjects (interiors, exteriors, portraits, still lifes, landscapes etc.) and by working in a style that is neither pure documentary nor overtly personal, but wandering between the two poles based on the demands of any particular picture. Some pictures are a generally straight look at an unexpected moment he has discovered; others have a stronger undercurrent of emotion or irony, suggesting he is drawn to subjects which have more of a specific story to tell. The pictures in this show turn on a few common themes: the militarization of our world, a heavier sense of loneliness and exhaustion, the neglect and decay that have become commonplace, and the overall melancholy that has pervaded our society as a result of the changes around us. Home Environment, Billings, MT, 2008, (at right, above) with its toy Humvee winning first prize shows just how far these new behaviors have invaded our daily lives.
Soth also picks up on the remnants of fear, a turning inward and building up of defenses against all comers, including our friends and neighbors. Not only are we not triumphant conquerors, we have become more afraid of each other, closed and tired. His image of an empty room, with the shades drawn (Northfield, Minnesota, 2001 at right, middle) seems entirely emblematic of an entirely too common worldview now among us. Soth’s Avenue Theater, Dallas, TX, 2006 (at right, bottom) was particularly prescient about the coming economic troubles, showing a theater converted into a pawn shop, with plenty of worn out lawn mowers and bicycles arrayed out front, ready for an offer. While I have selected three images that perhaps highlight the unwanted lingering effects of these past years, there are also plenty of moments of wry humor and irony in this show, spotlights placed on situations that contains a mix of emotions. In some ways, it is hard not to think about Robert Frank, William Eggleston, and Joel Sternfeld when walking though this exhibit; there are pieces of each to be found here, from Frank’s incisive commentary, to Eggleston’s play with color, to Sternfeld’s deadpan wit. Soth seems to have channelled them all and added his own perspective to the mix to generate these memorable images.
Overall, I very much appreciate Soth’s ability to wade into the public discourse on a controversial topic and come out having added something to the discussion rather than just piling on. There are many outstanding images here, and each has mysteries to unfold if given the chance. In some ways, this show is an exercise in depression and disillusionment, but I came away surprisingly excited by the potential of art to make us see the world around us with new eyes.
The artist’s website can be found here. His page at Magnum Photos can be found here. There is a also self published, tabloid style newspaper produced in conjunction with the exhibit available.
Collector’s POV: The images in this show are priced between $3500 and $13000. Soth’s work began to appear in the secondary markets in 2006, and the number of images up for sale has been growing slowly but steadily. Auction prices have ranged from approximately $4000 on the low end to nearly $20000 at the top. This is an artist with a bright future, so perhaps now is the time to add one his images to your collection, before his work vaults into the stratosphere.
Rating: ** (two stars) VERY GOOD (rating system described here)
Alec Soth, The Last Days of W.
Through March 7
Gagosian Gallery
980 Madison Avenue
New York, NY 10021
Twitter| Facebook|