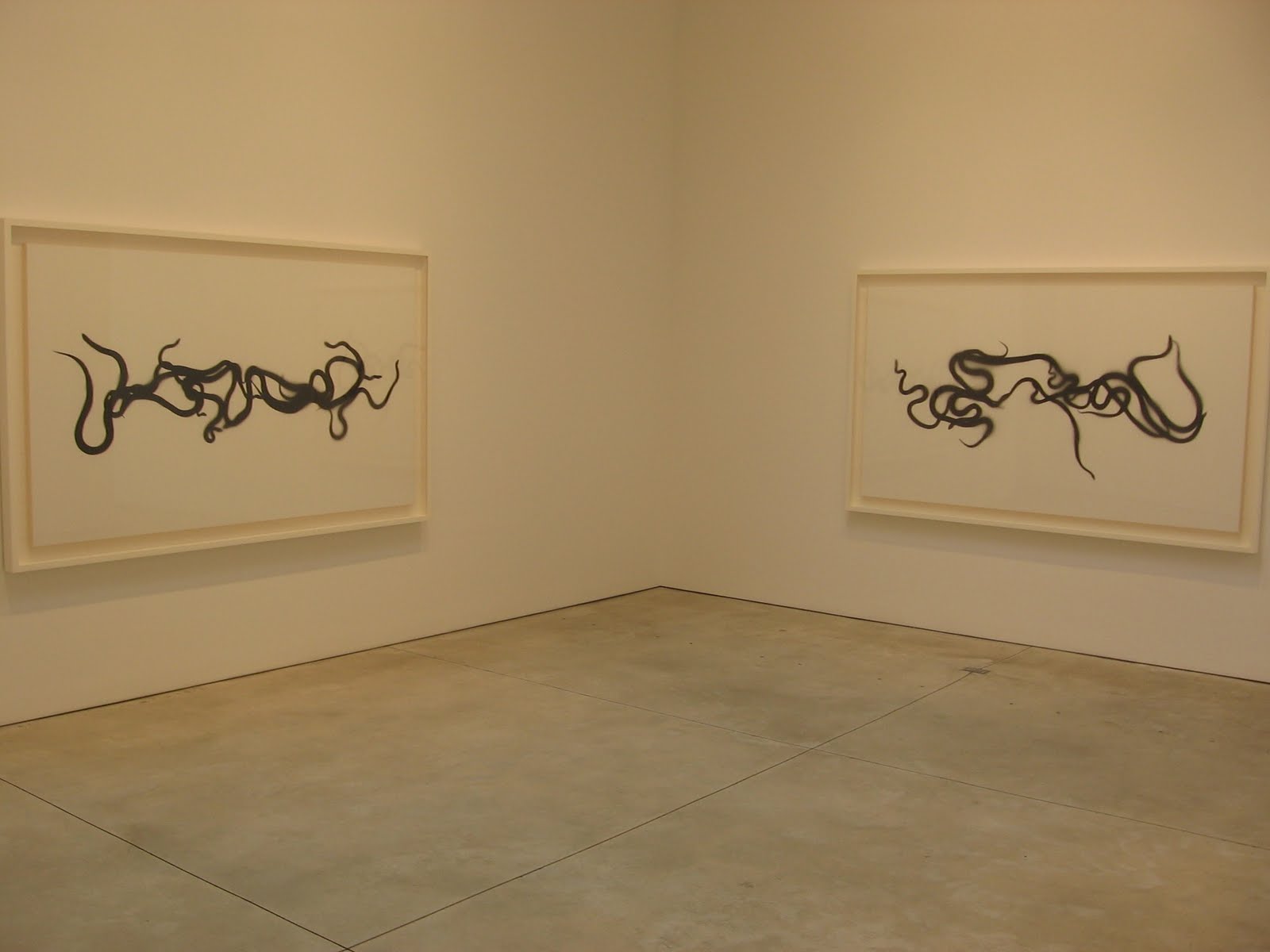 JTF (just the facts): A total of 13 works, displayed in the small front room and the larger main gallery (divided by a single wall). The front gallery contains three full plate daguerreotypes framed in black and hung against grey walls. Two of the works are each 28×42 and are unique; the third is 28×24 and is available in an edition of 9. While the larger images are hung on opposing side walls, the smaller image is displayed on the floor in the middle of the room. All of the works in the main gallery space are unique gelatin silver print photograms mounted on canvas, framed in white (without mats) and hung against white walls. Five of the images are 103×60, two are 58×54, two are 62×104, and one is 76×63. All of the works in the show were made in 2010. (Installation shots at right.)

Comments/Context: In the past twenty years or so, Adam Fuss has taken the seemingly simple process of the photogram and created a radical, innovative and original body of contemporary art. He has alternately experimented with water droplets and smoke, rabbit guts and sunflowers, lacy baptism dresses and babies in puddles, creating large scale organic silhouettes and patterns in a spectrum of saturated colors, adding layers of symbolism and spiritual meaning to everyday objects. While Fuss has previously explored the imagery of snakes (swimming through water or skittering through powder), his new works dive deeper into this subject matter via a pared-down monochrome palette. Inky black forms tangle and swirl in intertwined and overlapping bunches, creating graceful gestural movements that echo the elegance of Chinese calligraphy or the kinetic energy of Jackson Pollock’s abstractions. Blurs in the process make it clear that these are not static frozen forms, but active living beings, bringing an element of chance and a sense of motion into the compositions.
The resulting jumble of slithering black lines and curves is then superimposed on several different backgrounds: a grid of newspapers, a vertical shaft, or pure expansive white. The alternate contexts pile on symbolic connections to the game Snakes and Ladders, the myth of Tiresias and the caduceus, and the alternately positive and negative views of snakes throughout history. I found the simplest images with white backgrounds to be the most powerful and refined, the arrangement of lines uncluttered by competing ideas. When the knot of snakes coalesces into just the right graphic design, something magical happens. In the smaller front room, the uncertainty of motion found in the photograms is exchanged for the precision detail of the daguerreotype process. In matching large scale plates, an empty mattress sits alone, or is adorned with a coil of black snakes; in this case however, the process picks up every reptilian scale and highlight, making the snakes look all too real. Nearby, a close-up view of a vagina sits on the concrete, like a fleshy opening in the floor. For me, the symbolism here was a little too heavy-handed, and as such, I found the abstract arabesques in the other room much more compelling and beautiful.
Overall, Fuss’ high contrast black and white photograms are both jolting and harmonious, finding a polished balance between the literal and figurative, the threatening and the lyrical. It’s an impressive and mature display of the continuing evolution of his craft and ideas. Most importantly, the images themselves are wholly original and memorable, tied back to any number of traditions, but at the same time, exciting and expressively new. Collector’s POV: The works in this show are priced between $40000 and $65000. Fuss’ images have become more consistently available in the secondary markets in the past five years or so, with prices ranging from $2000 to $90000, depending both on size and subject matter. The artist is also represented by Fraenkel Gallery in San Francisco (here) and Xavier Hufkens in Brussels (here).
Rating: ** (two stars) VERY GOOD (rating system described here)
Transit Hub:
Adam Fuss, Home and the World
Through October 23rd
Cheim & Read
547 West 25th Street
New York, NY 10001
Twitter| Facebook|