With so much innovation going on at this particular moment in contemporary photography, it might seem delusionally foolhardy to think we might be able to make critical sense of it as it is happening. But in the last year, I felt a real frame-breaking shift in the fabric of the medium, so much so that I have now begun to see the past few years as the precursors to a broader new imperative that is beginning to reach maturity – the rise of what we might call interdisciplinary photography. This approach has developed so much momentum that it is literally engulfing the leading edge of the medium, gorging itself on adjacent artistic methods and incorporating them piece by piece into a larger whole. It’s a voracious beast that we have unleashed, and it’s currently expanding in nearly all directions at a breakneck pace.

To understand how we got to this place, I think we have to go back to the beginning of the digital revolution. In the slide below (which I developed for a recent lecture), I have tried to graphically depict the simplistic old world, where analog photography was basically a separate entity, next to and often minimally overlapping with other artistic traditions. In this age, when photography mixed with other media, it was almost always to document those other activities, and there was minimal connection between the circles. The Pictures Generation artists and those that followed in their appropriating footsteps began to tear down the walls that had kept photography so isolated, and with the rise of the Dusseldorf school and large scale printing, we started to see attempts to make photography more relevant to the contemporary art dialogue. But on the eve of the digital transformation, I think photography still entered this discussion on its own terms and rooted in its own traditions; it was following and responding rather than leading. 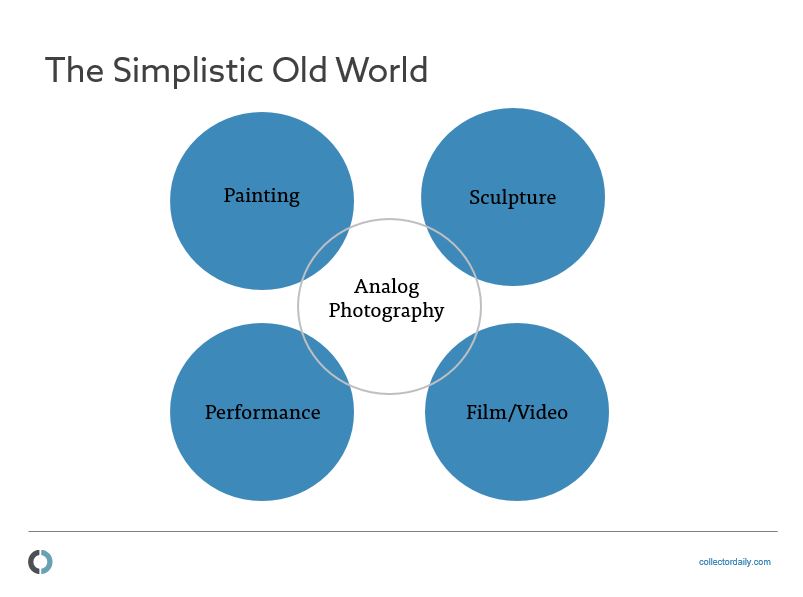 With the benefit of hindsight, I’d like to make the argument that much of the first 15 years of the digital photography age, say from roughly 1995 to 2010, we were in a period of direct technical substitution, where a new technology gradually and eventually almost entirely supplanted an old technology. During this time, early adopters had to deal with constantly evolving software tools and had to improvise and experiment to recreate effects that were commonplace in the previous methodology. Along the way, we saw the beginnings of new digital/Internet-based experimentation, where uncharted white space suddenly opened up for those artists willing to go beyond their existing preconceived boundaries and aesthetic limits. Looking back at those first digitally stitched and composited works, those that first took advantage of mirroring or color tweaking, or still others that first scavenged images from the net, there is a kind of nostalgia – those artworks are reminiscent of a particular, now bygone time, “so 2006” we might say, without seeming flip.

But along the way, an unexpected, or at least somewhat unforeseen, confluence took place – the larger wave of digitization sweeping through our lives (the one that disrupted music, books, and shopping, and so many other daily activities) began to intermingle with the now digital nature of photography. And so digital/net photography began to spill over into video, and painting, and sculpture, and performance art, with very little to halt its onslaught. To make matters worse (or better, depending on your point of view) previously completely unrelated image stockpiles, from archives and libraries to surveillance footage and scientific imaging (now digitized) all converged at one single point. Suddenly, there was an ocean of available raw material (exponentially augmented by the advent of the cameraphone), all of which was usable on a common platform. (The slide below attempts to show this expanding presence of digital photography and the nearby genres on which it is increasingly feasting.) 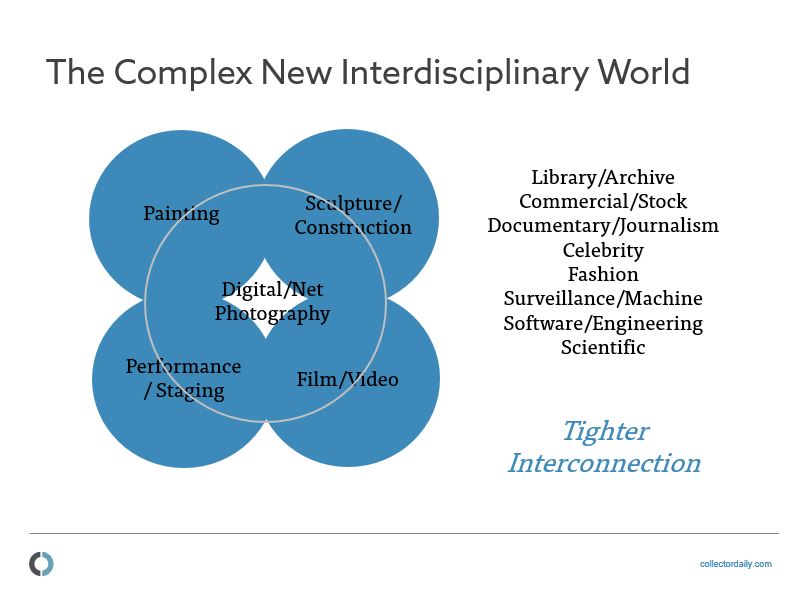 When I look back at the past few years, especially at the photographic work shown in New York’s rawest and most emerging galleries, it is now clear that the expanding footprint of digital photography had increased to the point where it was becoming interdisciplinary. Part of this intermixing was enabled by the pervasive adoption of the inkjet printer and its ability to print a photographic image on nearly any surface. But the larger effect is I think a result of a more subtle shift in artistic mindset, from “I am a photographer using a camera to document X” to “I am an artist who is using a computer/scanner/camera to mine an archive of found imagery, using those images to build studio installations and sculptures, which I then rephotograph multiple times and reprocess with a software algorithm” or some such equally complicated combination of steps, processes, and intermingled, mashed up ideas. This is not to in any way imply that the traditional mode of photography has somehow been supplanted or become less relevant; on the contrary, I think there will always be a place for superlative straight photography. But out on the bleeding edge, it seems like there are less and less straight shooters and more and more interdisciplinary mixers.

Photography like the kind I am describing has become intricately layered, with numerous connections and tangents to be traced and followed, the final output of which may be a photograph or may be something else entirely. Since we are in the early days of the maturation process of this approach, we are still seeing our share of convoluted Frankensteins, but what should make us excited is that so much new territory for experimentation has now opened up. I think we will look back on these years as a time of incredible flowering, with the first wave of the digital revolution already passed and washed out on the artistic beach and the second wave beginning to crest with power and majesty. For those fools and idiots peddling their “end of photography” doomsday scenarios, it’s clear that they just aren’t paying attention to the single most exciting burst of creativity the medium has seen in decades.

Part of what is fascinating about this particular moment in the evolution of interdisciplinary photography is that we haven’t yet evolved a sophisticated vocabulary for talking about it. Both the contemporary art galleries (who are less versed in the history of photography) and the specialist photography galleries (who are less versed in the micro trends of sculpture, painting and other media) are both scrambling to find ways to explain this work to collectors; what’s happening is more than appropriation, and surface, and reuse, and manipulation. Both sets of galleries are coming at the work from skew angles (given that these works are inherently hybrids), and both will need to learn from the other side if they are to capture the complex resonances that this interdisciplinary photography offers. This will be even harder for the specialist photography galleries who are deeply rooted in vintage photography; I see these venues struggling to stay relevant in these new discussions unless they can boldly pivot into the fray and turn their knowledge and context into an advantage. And many established venues in both camps simply haven’t engaged with this new style of work yet, leaving the door open for emerging galleries to carve out and defend the territory.

When I step back and look at my gallery log from the past year, it’s truly astonishing to see how much of the photographic work I found original and exciting falls under this interdisciplinary umbrella; it’s not that straight photography can’t still be astonishing, it’s simply that there is so much crackling going on when photography is thrown into the blender with half a dozen other artistic modes. Let’s take as just one example the mashup of photography and sculpture, and the inherent exploration of object quality, physical presence, and texture that such a combination implies. Letha Wilson (here and here) has mixed grand photographic landscapes with poured concrete and two by fours to create works that interleave the natural and man-made. Diana Cooper (here) and Jennifer Williams (here) have used photographic imagery as part of larger wall covering collaged installations that transform space. Brendan Fowler (here) and Carey Denniston (here) have interrupted our view with smashed frames and obscuring panels. Sara VanDerBeek (here) has printed on mirrored sheets, while Ethan Greenbaum (here) has printed on molded transparent plastic. Elad Lassry (here) and Sissi Farassat (here) have decorated their works with silk pleats and shiny sequins. And what about those artists who are working with staged studio constructions that are truly sculptural like Yamini Nayar (here), Shannon Ebner (here), or David Gilbert (here)? In just this one tiny vein of exploration, there is an overwhelming amount of innovation. If you’re game, John Houck, (here), Lucas Blalock (here), Michele Abeles (here), Annette Kelm (here), Travess Smalley (here), Trevor Paglen (here), Owen Kydd (here), Mariah Robertson (here), and Penelope Umbrico (here) might take you down any number of other unexpected interdisciplinary roads, and this is just a sample of the artists who had a solo show in New York in 2013 that we reviewed – if we open it up further, the list of innovators get even longer. Intellectually, my favorite interdisciplinary idea of the year was Garrett Pruter’s paintings made from melted down photographic emulsion (here); they seem to embody this cross-functional experimental enthusiasm that is sweeping through the ranks of emerging photographer/artists. Is any of this photography in the traditional sense? No. Is any of it exciting and thought provoking? Damn right it is, even if Edward Weston might not approve.

So the important story of photography in 2013 was really about blurred lines (with a grudging nod to Robin Thicke’s Marvin Gaye ripoff). The maturation of interdisciplinary photography has far reaching implications for everything from how we talk about and define the medium to how artists execute their craft. But more thrillingly, we have now assembled the pieces necessary for explosive, disruptive change in photography; it’s a recipe for something to “go right” and I expect we will see more signs of radical interdisciplinary innovation in 2014.

JTF (just the facts): A total of 28 color photographs, framed in whitewashed wood and unmatted, and hung against white walls in the main gallery space, the entry area, and ... Read on.