Part 1 of the survey (here) explains the format used in the detailed slideshow below. It also offers some introductory thoughts on the fair as a whole. So while it is certainly possible to jump directly into any one of these individual reports and start digging, return to the beginning if you want a bit more context. Parts 2, 3, and 4 can be found here, here, and here.

As an aside, this final part of the summary includes a handful of works on view in the various special exhibitions at Paris Photo. Some of these were drawn from public and private collections, while others were curated thematically from various participating galleries. As a result, it was not always clear if the works on display were actually for sale or not, and not all of the displays were continuously attended by staff members associated with the collections/galleries. The practical result of this is that some of the individual works at the end of this report do not have prices. 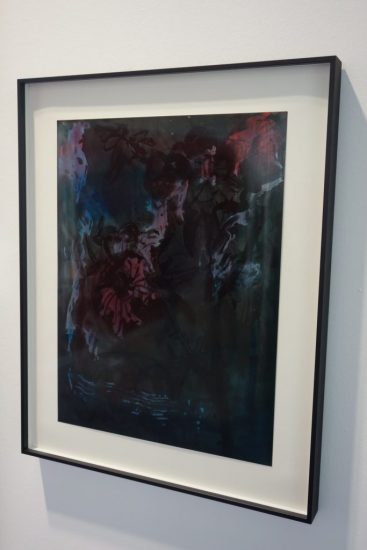 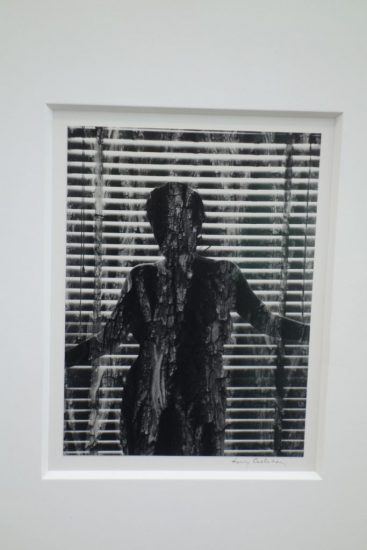 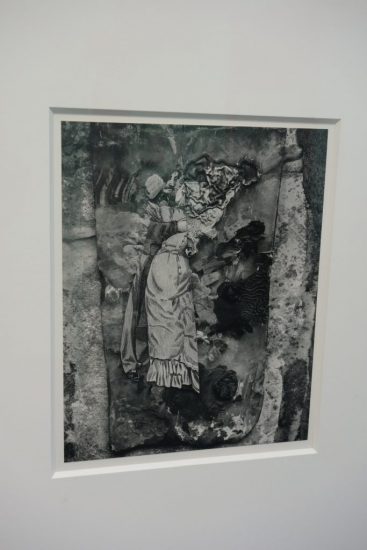 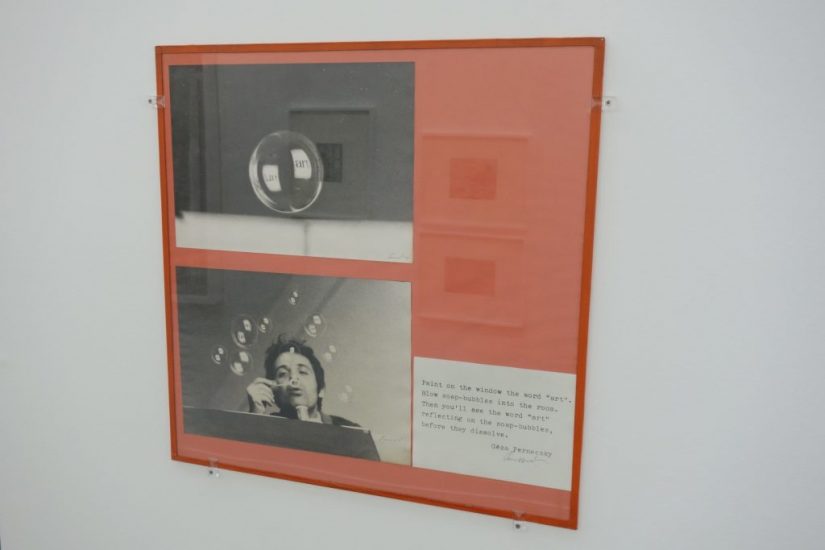 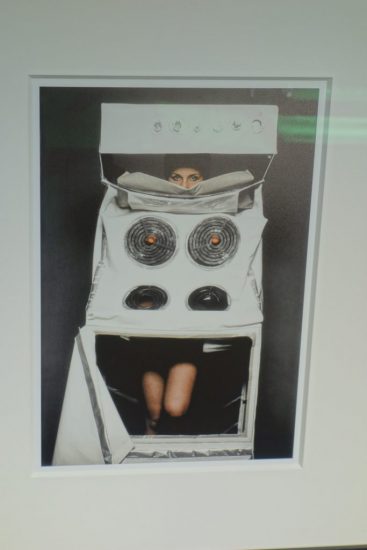 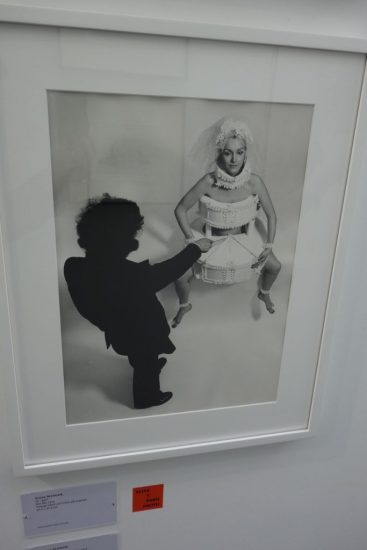 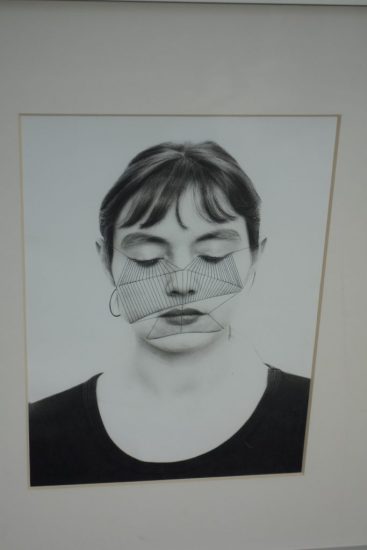 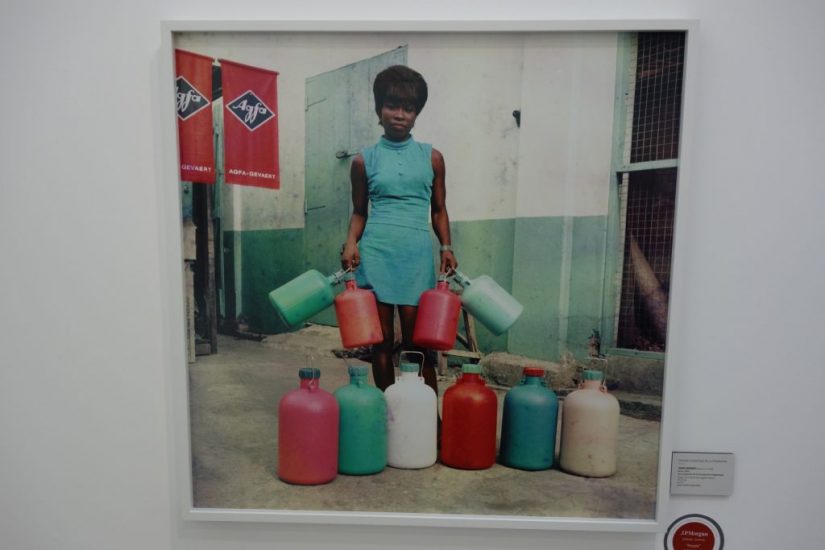 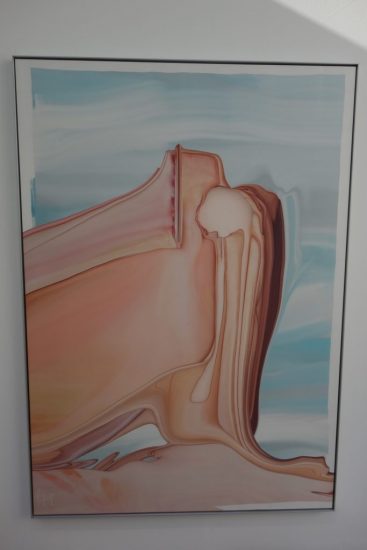 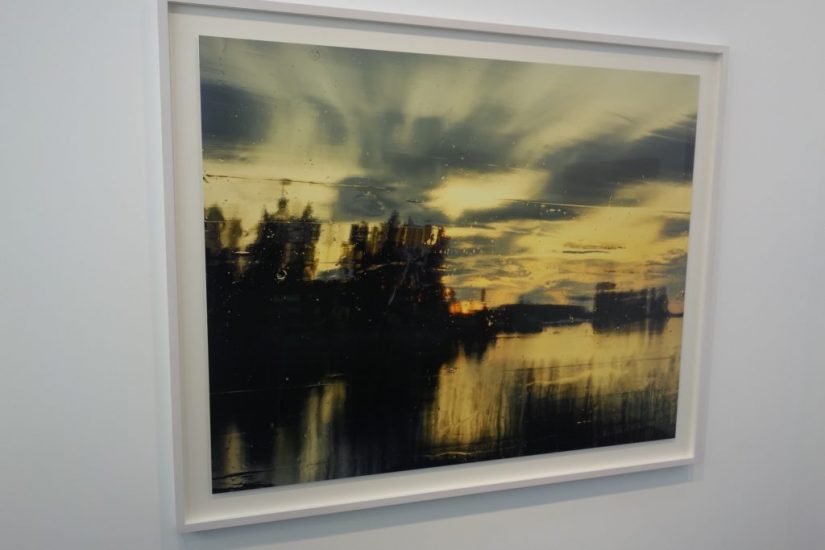 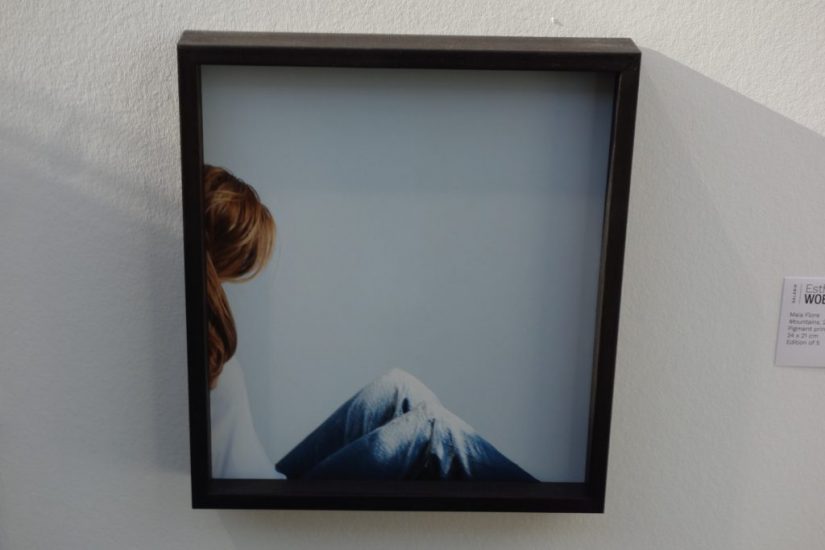 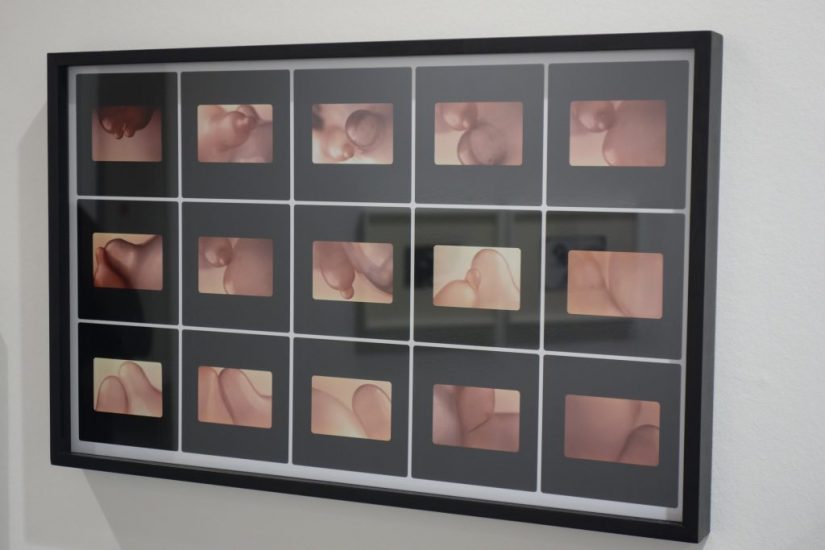 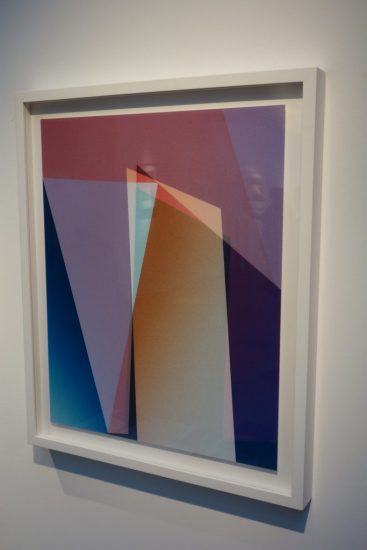 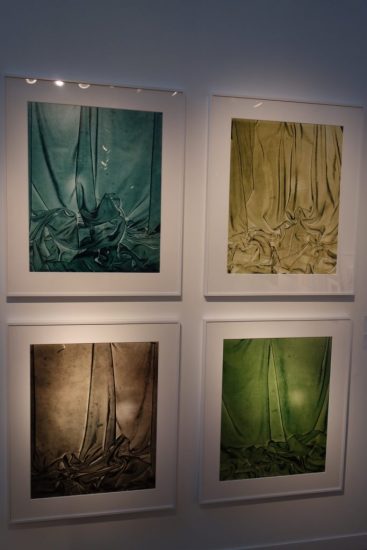 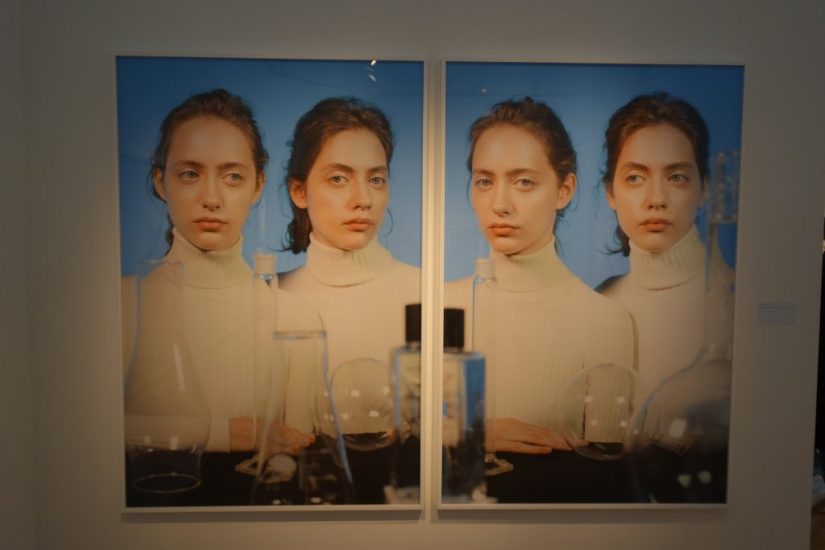 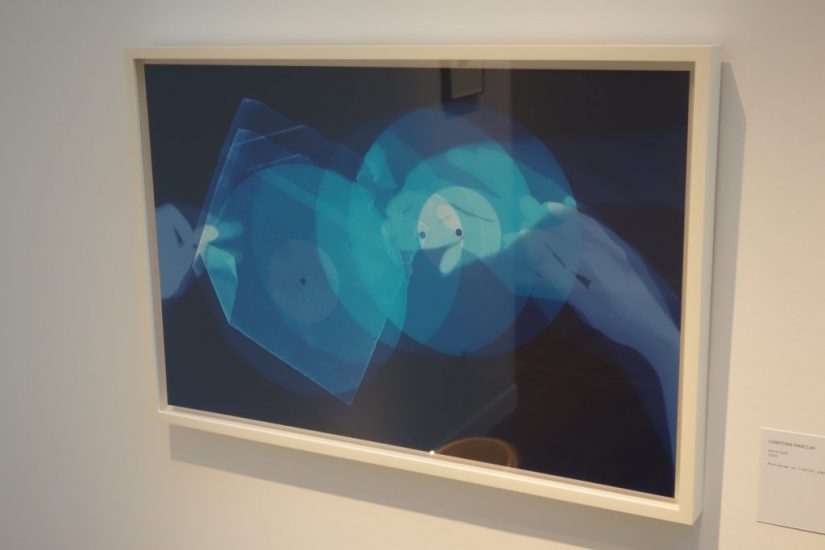 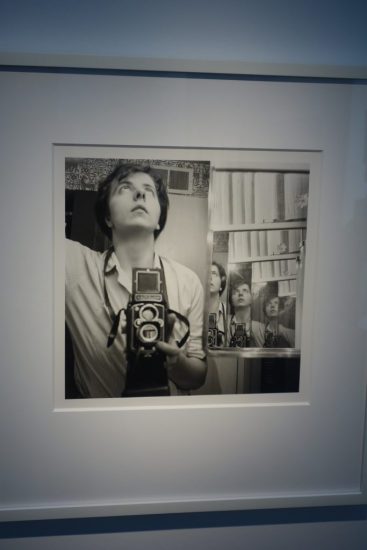 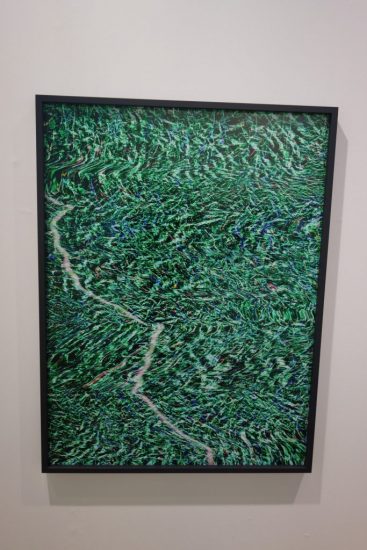 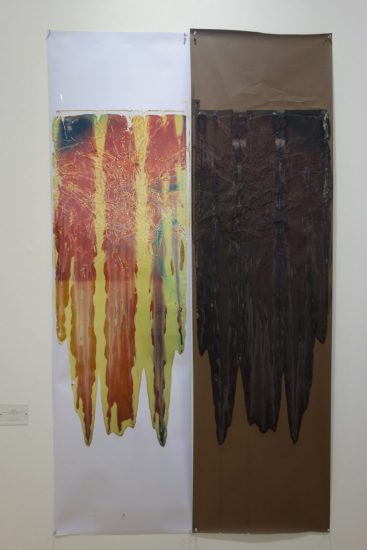 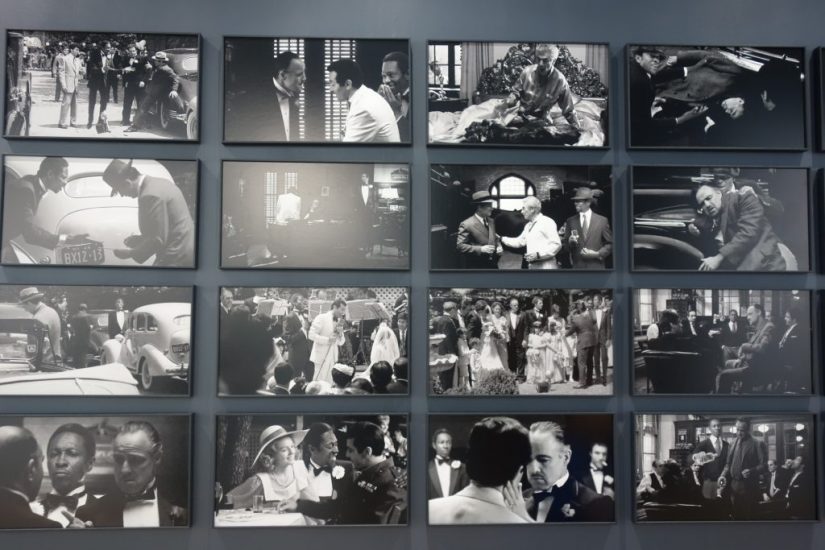 M97 Gallery (here): Often when photographers head into the darkroom to explore expressionistic gestures made with chemicals, we call the resulting works “painterly”. Sun Yanchu has taken that idea one literal step further, making actual paintings with developer chemicals on gelatin silver paper. In this image, brooding floral blossoms emerge from a tangle of darkness, with misty areas of pink and blue filtering through the mottled shadows. Priced at €1800.

Etherton Gallery (here): This multiple exposure image by Harry Callahan appears to be unique, having never been published anywhere and no other prints readily available or known. While Callahan made these kinds of works in camera, this one is particularly puzzling, given the way the tree bark intermingles with Eleanor’s silhouette and the on-top overlap of the white lines of the window blinds. Even after much sustained looking, how it was actually done (and whether it was two or possibly three exposures) remains a tantalizing process mystery. From a step back or two, the tree bark looks like the downward movement of a waterfall. Priced at $24000.

Etherton Gallery (here): The quality and precision of Frederick Sommer’s prints never fails to stop me in my tracks. Yes, we have seen images like this from Sommer before, many times, but the minute contrasts between the lichen covered rock, the swirled metal plate (if that is what it is), and the book print etching are still striking, especially when placed in such close juxtaposition. These are the kind of expertly rendered black and white textures that never quite go out of style. Priced at $28000.

Vintage Galéria (here): Géza Perneczky’s photographic projects from the 1970s took photoconceptualism in cleverly original directions. In this 1972 work, he creates floating soap bubbles with the word “art” embedded in them, imprinting language (via reflection) on the sides of the fragile orbs. It’s the kind of imagery that requires intense braininess to achieve the look of effortless simplicity. Priced at €15000.

Richard Saltoun (here): Helen Chadwick’s incisive 1977 series In the Kitchen is a feminist photography/performance project worth rediscovering. In it, she poses herself inside soft versions of a washing machine, a stove, a sink, and other kitchen fixtures, her nude form trapped within these domestic symbols. But her direct stare lets us know that the costumes are just that, her identity not entirely defined by her household appliances. Individual prints (posthumous) priced at €3500.

Richard Saltoun (here): The white wedding cake dress on the otherwise nude bride is the basis for an iconic feminist setup from Penny Slinger. In this 1973 image, the anonymous black-suited groom cuts a large slice from the cake, the phallic knife removing a wedge between her legs, the sexual power dynamics and traditional roles made overt. Priced at €15000.

Richard Saltoun (here): While some of Annegret Soltau’s later works have a rawness and fury that is sometimes hard to witness, this delicate 1975 work from her series of string-based performances is more approachable. The lines that emanate from her eyelashes are actual thread, the intricate sewing producing an elegant geometric pattern. Priced at €12600.

Galerie Clémentine de la Féronnière (here): James Barnor was a new discovery for me at this year’s fair. Barnor was a newspaper photographer in Ghana in the 1950s, and after a stint in London, brought color processing to the country in the 1970s. This image from 1971 (in a large modern print) shows Barnor’s assistant outside his studio, the colorful jugs of chemicals perfectly echoed by other parts of the composition. Hopefully, exhibits and books will follow, so we can become more educated about his work. Priced at €8000.

V1 Gallery (here): There was very little digital distortion work at this year’s fair, but this image by Asger Carlsen was one solid example of what is happening out on the cutting edge. Carlsen is likely best known for his harrowing Photoshop constructions of bodies, where limbs and torsos are deformed and reassembled in unexpectedly strange ways. These works start with stock photos of skin, but then melt into fluid movements of pastel pigment, which Carlsen then prints on silk to give the final product additional tactile richness. Priced at €10000.

Purdy Hicks (here): A sedate sunset landscape isn’t usually the kind of image that catches my eye, but this work by Jorma Puranen has a clever inversion to consider. To get the icy surface appearance, the artist covered a wall with shiny black paint and then made images of the sunset reflected on the wall, thereby creating the bubbled distortions that give the work its frozen originality. Priced at €16500.

Galerie Esther Woerdehoff (here): Flour dusted on a pair of bent knees wearing blue jeans – such a straightforward idea. And yet, Maia Flore’s setup delivers a kind of illusionistic magic we don’t see very often. Even the red hair on the side plays a role, giving us a faint echo of Hokusai’s towering wave. Priced at €2500.

Collection McEvoy Family. This set of tinted drapery studies by James Welling turns fabric folds into an exercise in exploring how sculptural volume is transformed by light and color. Each puddle of fabric has its own personality, each wrinkle and hollow its own highlights and shadows.

Collection McEvoy Family. This recent work by Barbara Probst takes her simultaneous photographic thinking and reduces it to a thoughtfully executed paired set. Between the glances, the hairstyles, the ribbing of the sweaters, and the arrangement of the glassware, we can intuit the setup of the cameras and studio, but the back and forth of the alternating looks is still wonderfully perplexing.

Collection McEvoy Family. This 2004 photogram by Christian Marclay turns records and sleeves into a stuttering record of iterative movement. The ethereal transparency of the objects gives the composition its sense of jittery harmonized time.

Collection McEvoy Family. The mirrored selfie is now a 21st century cliche, but leave it to Vivian Maier to make the most out of an obvious construct. Like the effect in a hall of mirrors, her upturned face deftly repeats to infinity.

Prismes Exhibit. Metronom (here): This recent work by Taisuke Koyama uses a paired arrangement of scanners to capture (and distort) the image of a crinkled piece of cellophane. In essence, it is a color study, its staticy (and surprisingly beautiful) undulating wave forms an outcome of the bouncing reverberations of light. Priced at €4700.

Prismes Exhibit. JHB Gallery (here): This camera-less work by Ellen Carey starts out with a crushed and crumpled negative, which is then merged with the large scale Polaroid positive, pushed through the development rollers, and turned into a diptych of pulls and elongations. The effect is something like the downward fall of a flaming starburst, the textures creating sparkling accents. Priced at $27500.

Prismes Exhibit. L’Agence a Paris (here): If you’ve never looked closely at how white The Godfather actually is, the images in the Nigerian photographer Uche Okpa-Iroha’s series The Plantation Boy will make you sit up and take notice. Okpa-Iroha has cleverly Photoshopped himself into every major scene in the film, and his sleight of hand is altogether impressive. He helps James Caan hassle the reporters at the wedding, watches the discovery of the horse head from the nearby window, and catches Marlon Brando as he gets shot in the street, making his black body naturally present in ways that it was entirely absent in the original. Seen as a set, the subtle use of humor in the images effectively raises important questions about stereotypical race representation in Hollywood cinema.