Part 1 of the survey (here) explains the format used in the detailed slideshow below. It also offers some introductory thoughts on the fair as a whole. So while it is certainly possible to jump directly into any one of these individual reports and start digging, return to the beginning if you want a bit more context. Parts 2 and 3 can be found here and here. 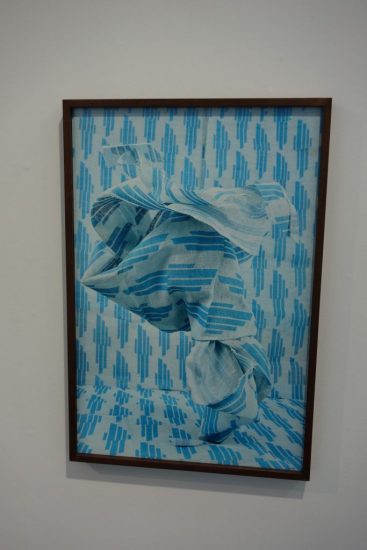 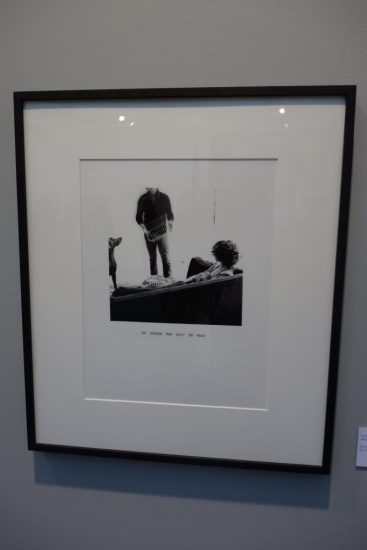 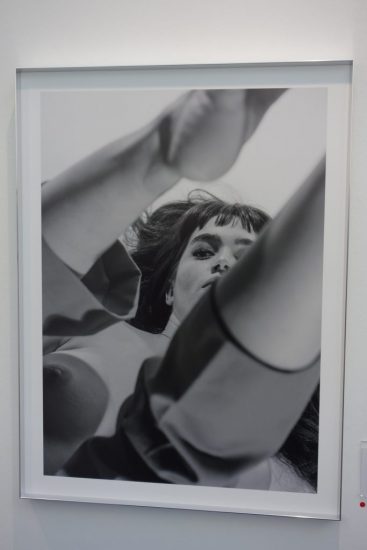 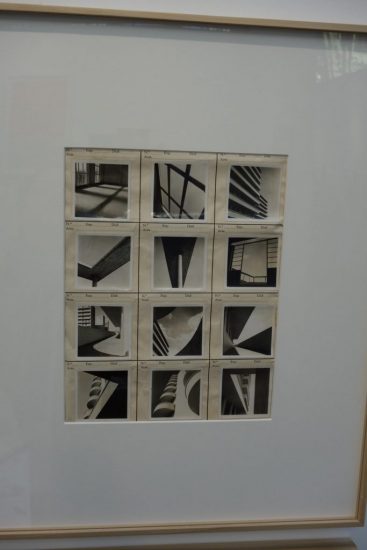 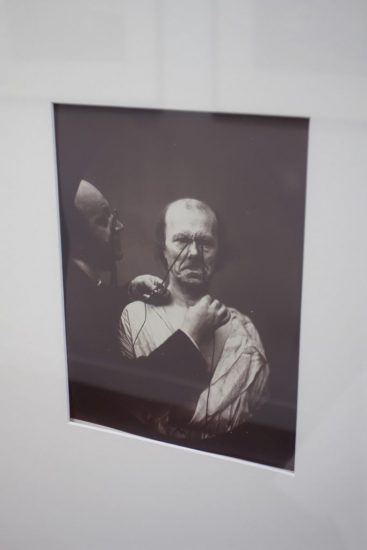 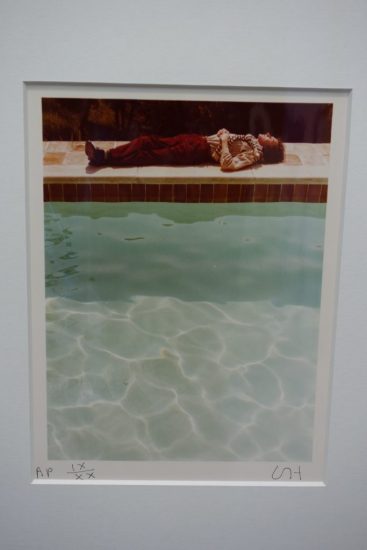 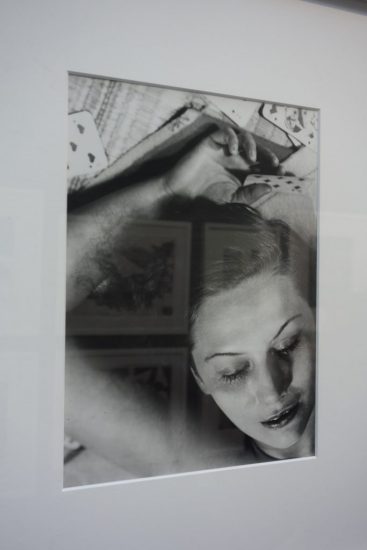 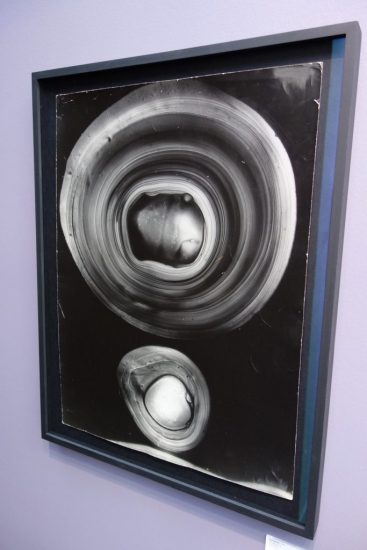 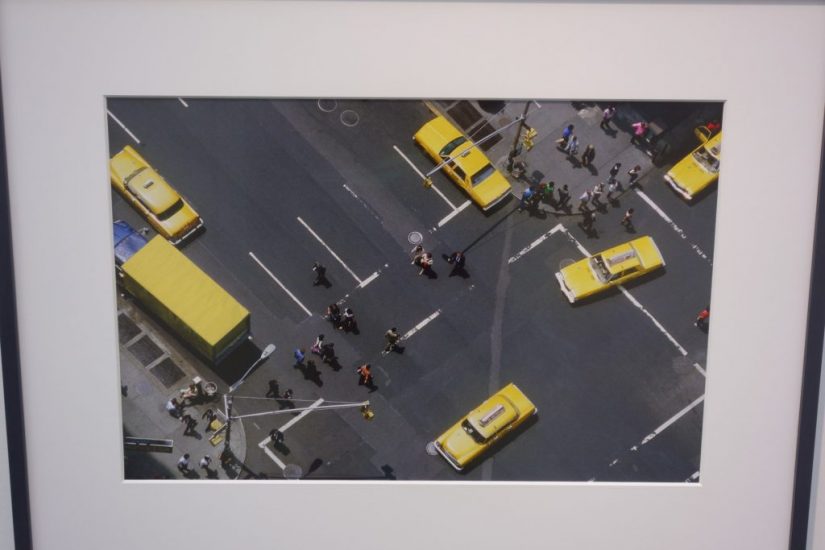 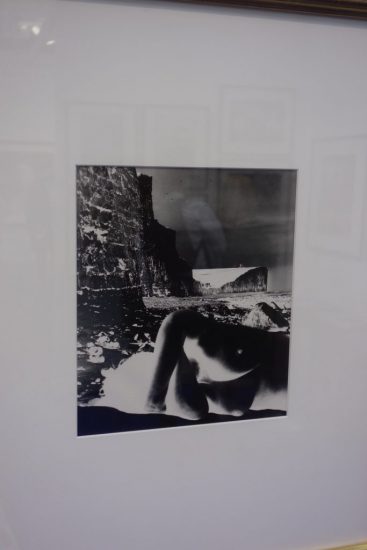 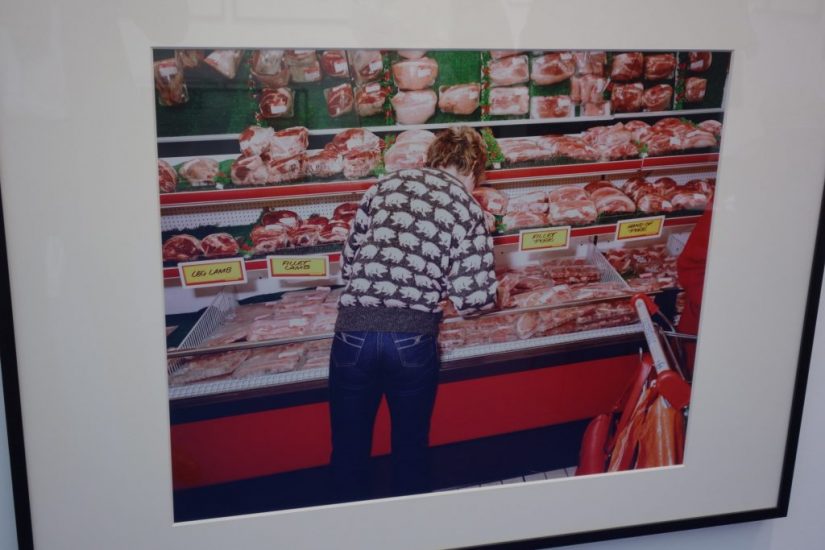 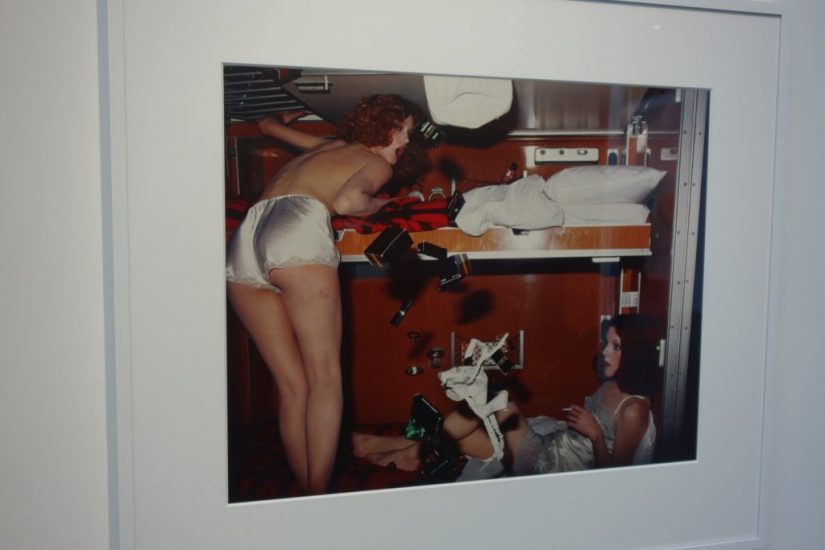 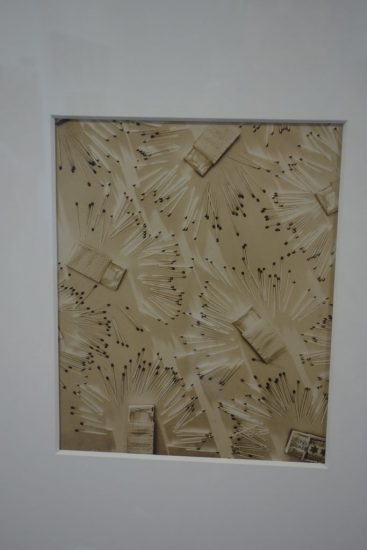 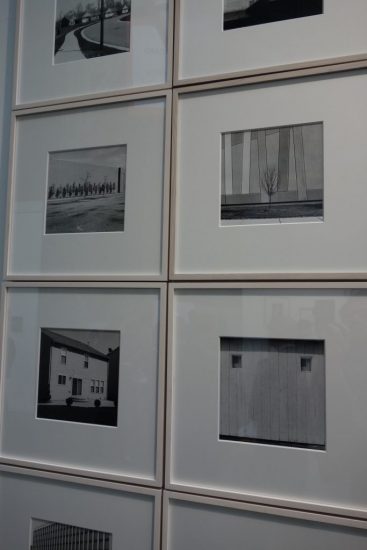 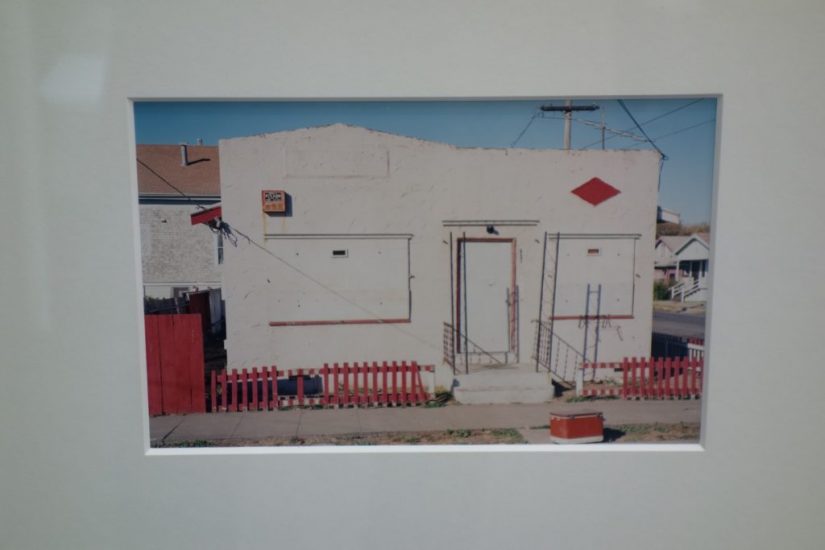 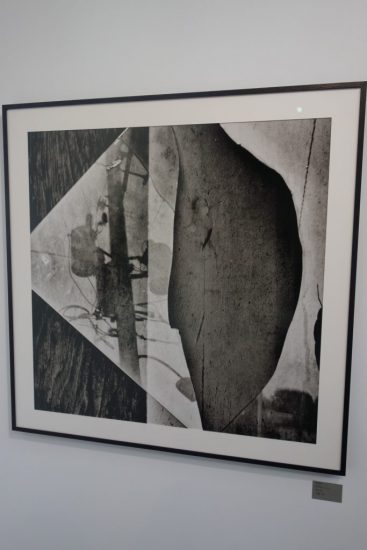 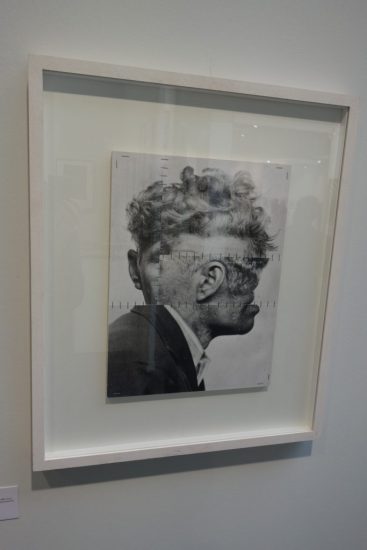 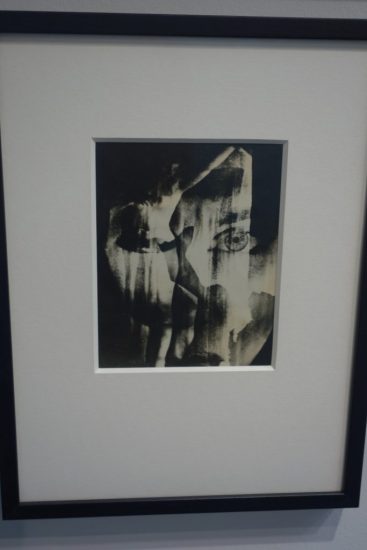 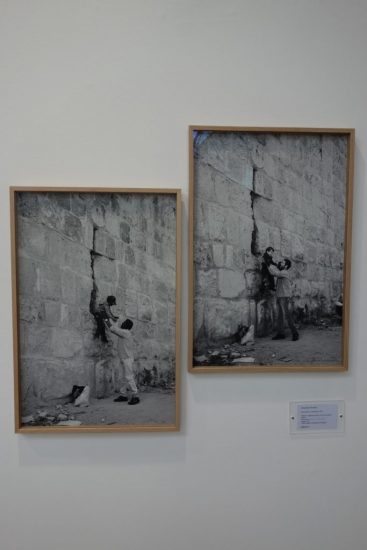 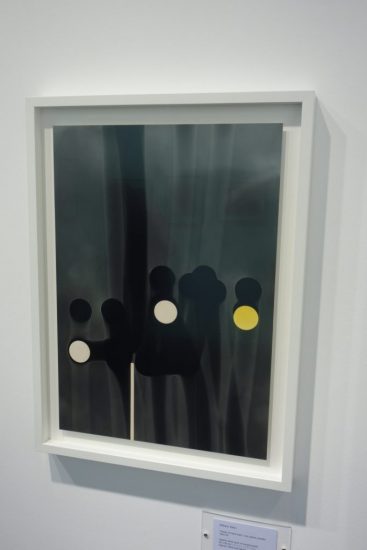 Flowers Gallery (here): Lorenzo Vitturi’s newest series/photobook is once again filled with vibrant still lifes constructed from eclectic market finds. In his hands, this swirl of blue and white cotton fabric becomes a gestural sculpture, its vortex of movement seemingly drawn upward by the wrapped folds. Priced at €6500.

Huxley-Parlour (here): This 1972 image by William Wegman brings the expectant face of a dog into his early photoconceptual setups. As Wegman holds an ordinary dish drying rack, the caption reads “He Showed Her What He Made”. Both the woman on the couch and the dog look at him, the alternate readings of the reference giving the situation its quiet comedy. Priced at €21500.

Danziger Gallery (here): For those that haven’t yet discovered them, Senta Simond’s portraits of young women have a freshness of vision and originality of conception that are compelling. This underneath angle picture uses the leg and arm as a screen of sorts, the sitter’s face and nude torso seen through the carefully orchestrated interruptions. Priced at €4500.

Galería RocioSantaCruz (here): This archive sheet from the 1950s by Marcel Giró documents the architecture of São Paulo with an eye for the boldness of geometries. Meticulously arranged and ordered (almost like a typology), the prints celebrate forms and angles, where balconies, windows, and overpasses become repetitions of pattern or high contrast studies of positive/negative space. Priced at €12000.

Robert Hershkowitz (no website): This 1855-57 photograph by Guillaume Duchenne de Boulogne and Adrien Tournachon captures systematic scientific tests made to document the expressions of the human face for artists. In this particular scenario, electricity is applied to the bridge of the subject’s nose, generating the tortured scowl of aggression. Priced at €35000.

Galerie Lelong (here): The dappled light of water in a swimming pool is a signature artistic motif for David Hockney, and this image turns that aqua patterning into a striated study of flattened layers. Two strips of water are offset by the tile and deck of the pool, with the extended relaxing figure completing the easy going warm weather mood. Priced at €18000.

Galerie Julian Sander (no website): It’s hard to know exactly what is happening in this Chargesheimer photogram, but few chemical studies have generated tightly concentric tree ring forms like these. Like a cross section of nested bubbles or a top down view of Saturn’s rings, it magnetically draws us into its bulging center. Priced at €20000.

Photo & Contemporary (here): Franco Fontana’s top down view of a New York city intersection turns the traffic into a color study of geometric yellow blocks. Set against the uniform blackness of the streets, several taxis, a delivery truck, and even the stop light fixtures pop with blasts of sunshine yellow. Priced at €8500.

James Hyman Gallery (here): While Bill Brandt made many radical nudes on the rocky shores of the East Sussex coast, this is the first I have seen that was reversed into negative tonalities. We’ve seen his distorted crossed arms before, but their eerie blackness in this print makes them all the more haunting. Priced at €32000.

James Hyman Gallery (here): It’s hard not to smile in warm appreciation when you notice that the man rummaging around in the pork section of the supermarket meat refrigerator in this Paul Reas photograph happens to be wearing a flashy sweater with a pig pattern. It’s the dry visual humor of coincidence, executed with wry attention and brash blasts of color. Priced at €2000.

Louise Alexander Gallery (here): The tumbling cascade of Chanel boxes and lacy underwear caught in mid-air by Guy Bourdin gives this fashion shoot setup its glamorous vitality. The sleeper bunks divide the frame into top and bottom, the exaggerated astonishment of the two models’ expressions making the split second scene all the more playful. Priced at €21400.

Keith De Lellis Gallery (here): This 1926 arrangement of match sticks and matchboxes was designed by Edward Steichen as a textile pattern for the Stehli Silk company. The clusters of matches with their dark tips almost look like feathers, the repetitions of the forms creating a gorgeous all-over design. Priced at €165000.

Only Photography (here): The pared down austerity of Gerry Johansson’s photographs makes even mundane buildings and landscapes feel ordered. Each black and white image in this grid is rich in precision, the arrangement of windows or the placement of a lone tree against a striped wall reduced to their formal essences. Each print priced at €1300.

Only Photography (here): This house front image by Henry Wessel combines compositional interests in both geometry and color. Red highlights jump around the frame, from the diamond at the top, to the picket fencing, and ultimately down to the cooler in the street, while blocky squares and rectangles organize the façade. Priced at €19500 for a set of 12 prints.

Magnum Gallery (here): This Matt Black photograph is a densely layered mix of textures and surfaces. Concrete sidewalks and scratchy tree bark bookend the composition, with the shadowed silhouette of a telephone pole cast down into the tonal interplay. The visual situation never quite resolves into clarity, leaving the abstract mysteries open ended. Priced at $5300.

Les Douches La Galerie (here): Rearranging the fragments of a cut up found photograph is nothing new, but Bernard Hosa’s facial reassembly with staples feels unexpected. In this work, the pieces of the puzzle remain pleasingly misaligned, the staples holding the distorted figure together like Frankenstein’s sutures. Priced at €2800.

Les Douches La Galerie (here): This shifting 1948 image by Val Telberg bears all the hallmarks of Surrealism. A single penetrating eye, a nude body, some textural mesh or gauze, and who knows what else are jumbled together into a mysterious multi-layer visual brew. Priced at €6500.

Polka Galerie (here): This smart pairing of split second images by Alexander Gronsky uses tonal shifts to question our assumptions about race. Taken in Jerusalem, the pictures document a simple scene where a boy jumps down from a rock wall into the hands of a man who is presumably his father. Color reversals of blue and red are converted to black and white, generating images that split similarity into polarizing difference. Priced at €2200 for the diptych.

Polka Galerie (here): A single splash of yellow animates this 1950s abstraction by William Klein. Circular dots bounce through the murky darkness, the introduction of color energizing the dance. Priced at $6000.

Part 5 of this report can be found here.