Part 1 of the survey (here) explains the format used in the detailed slideshow below. It also offers some introductory thoughts on the fair as a whole. So while it is certainly possible to jump directly into any one of these individual reports and start digging, return to the beginning if you want a bit more context. Part 2 can be found here. 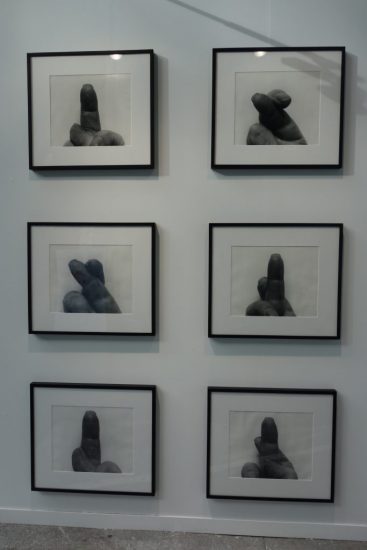 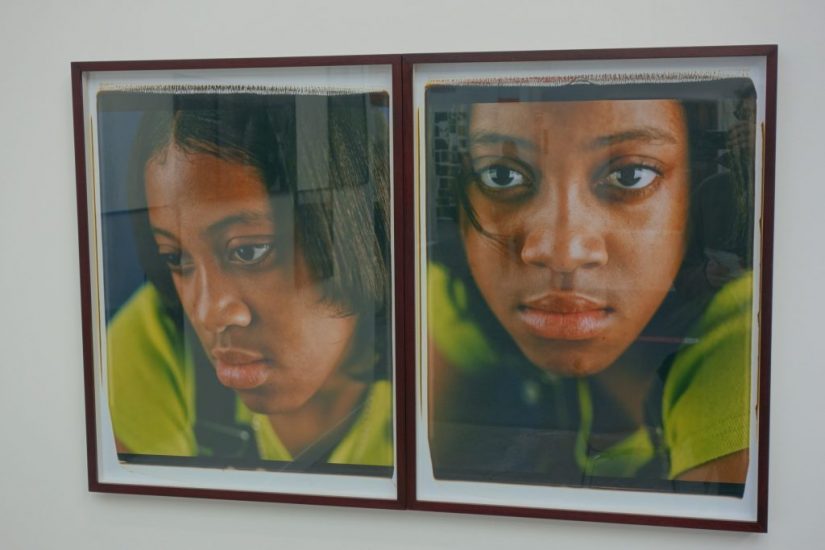 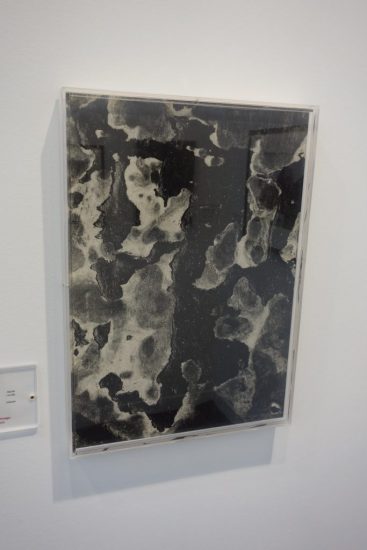 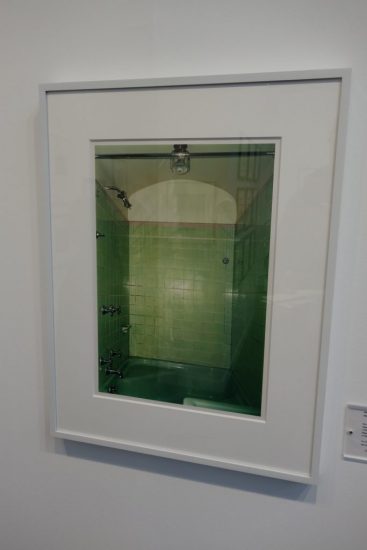 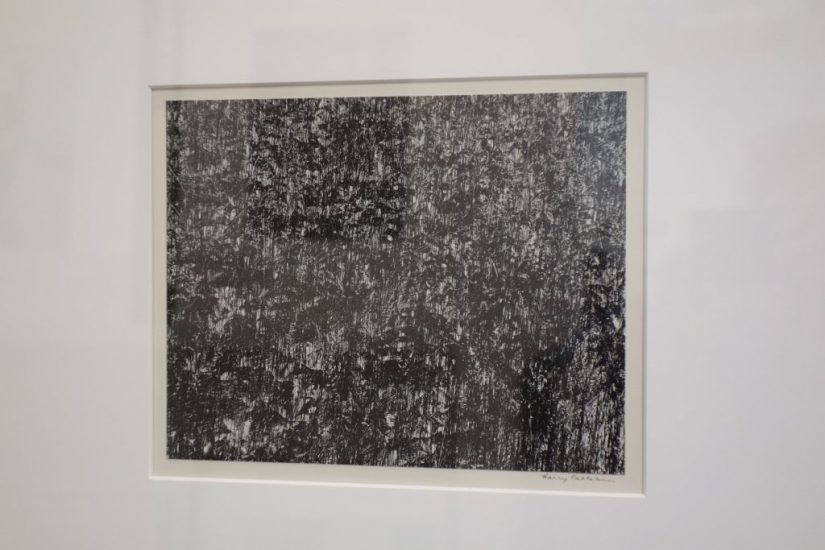 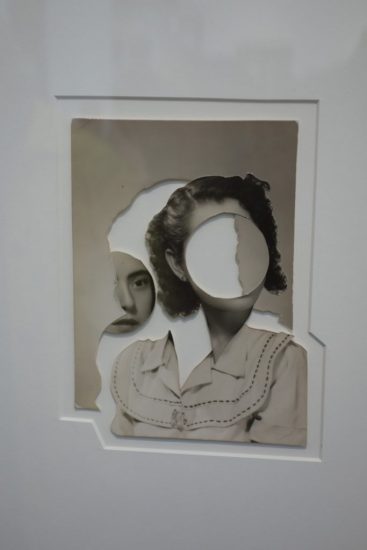 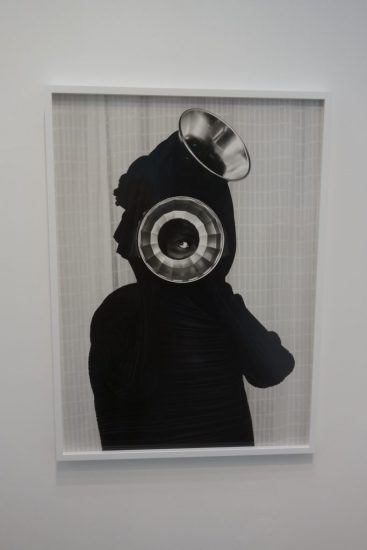 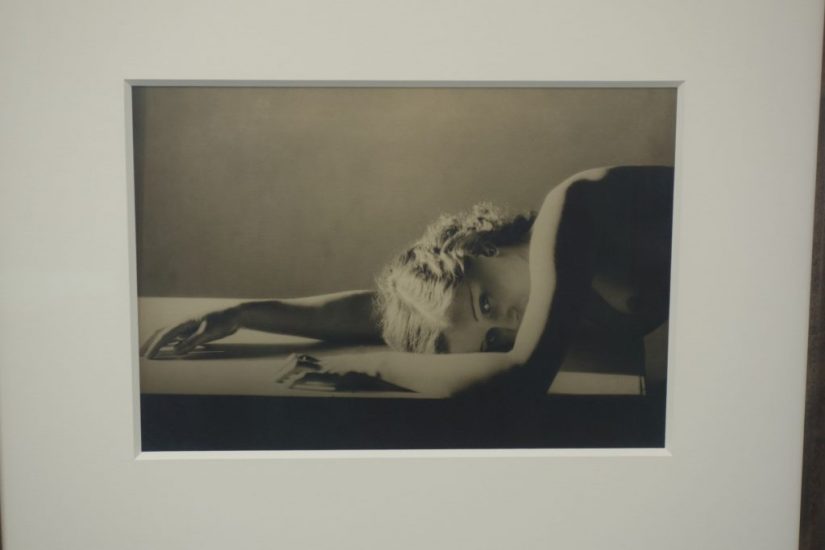 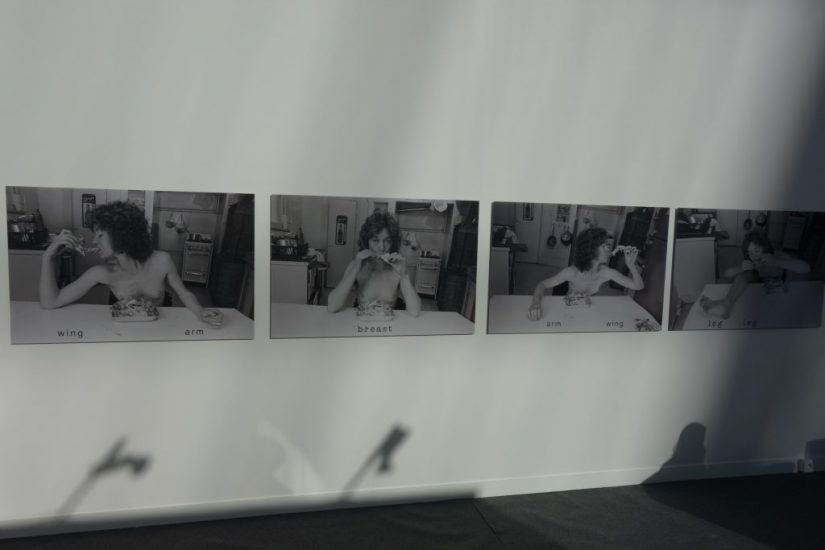 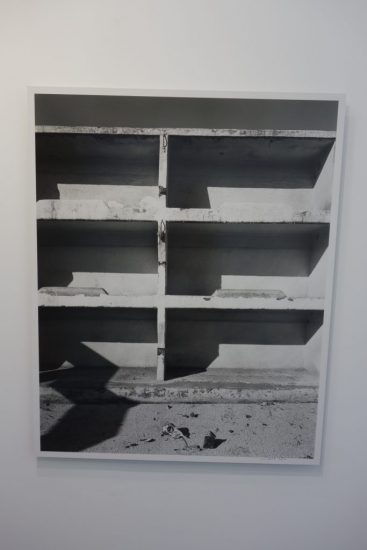 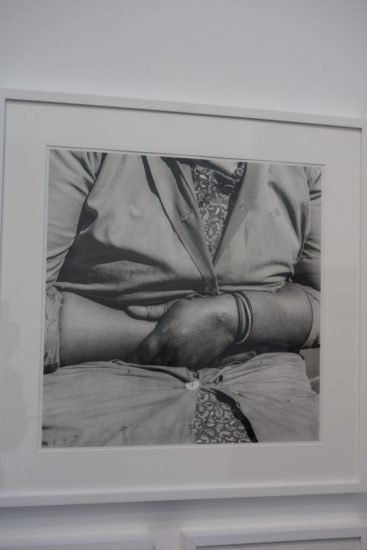 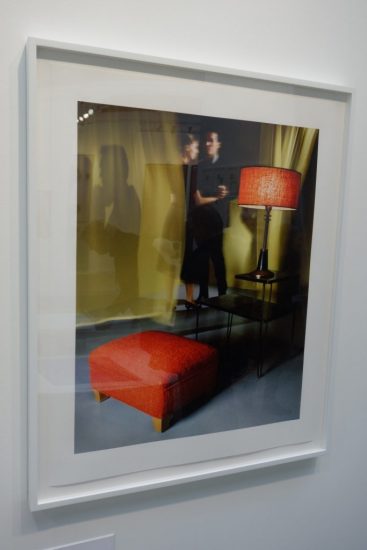 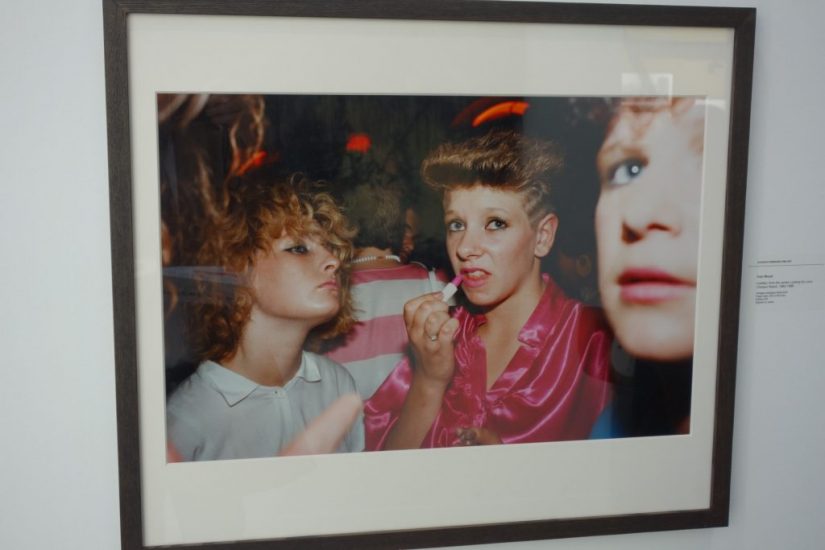 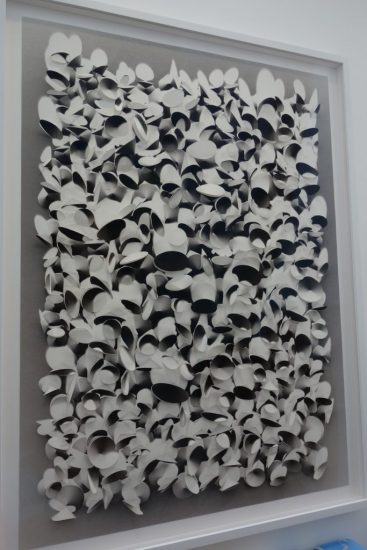 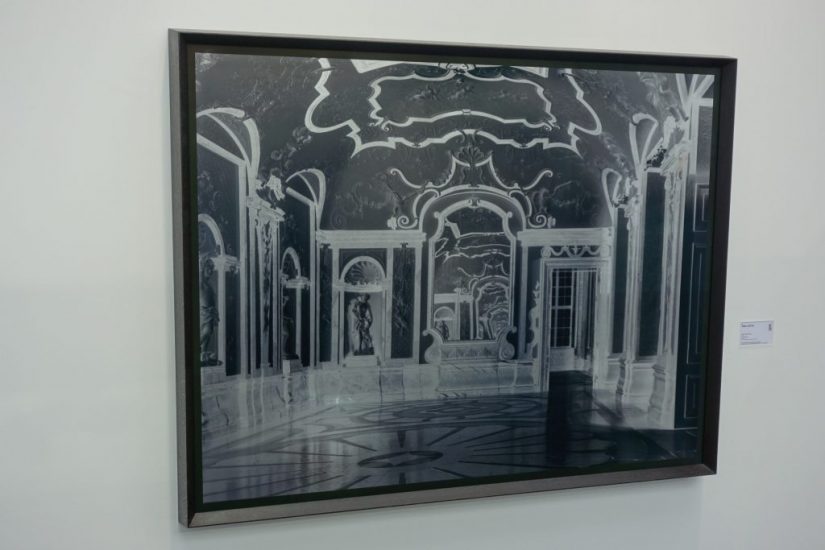 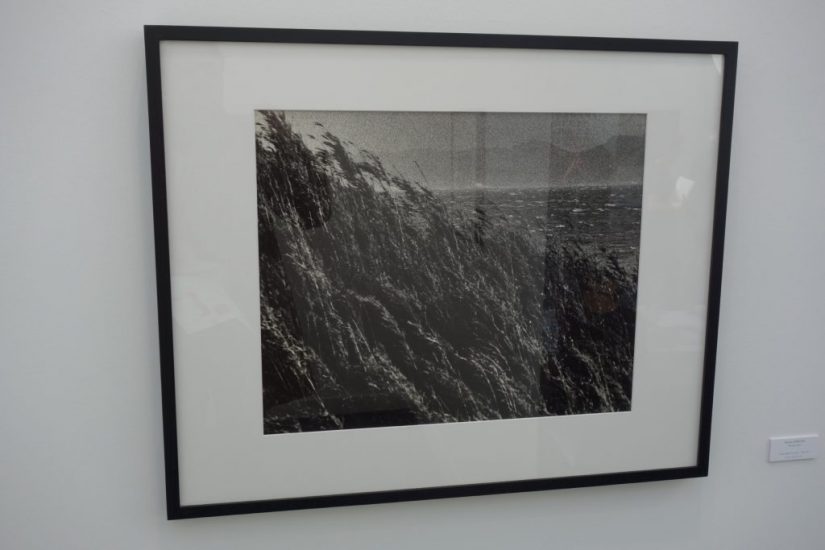 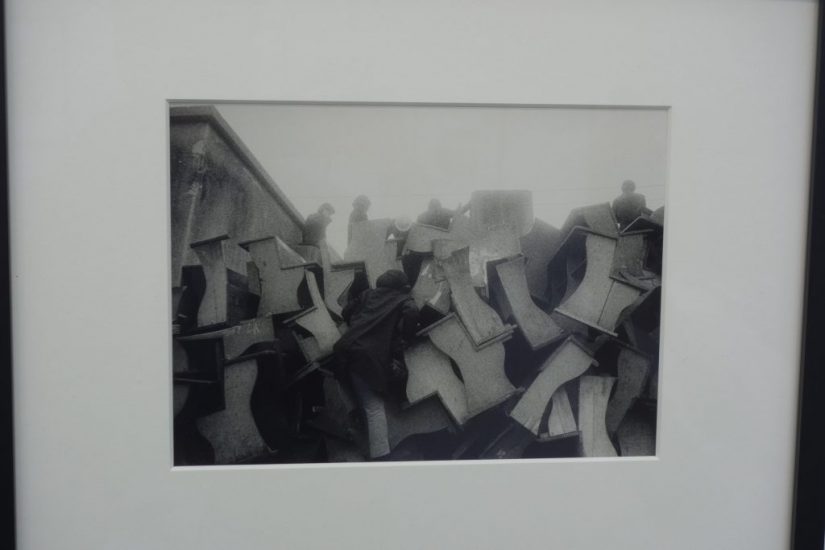 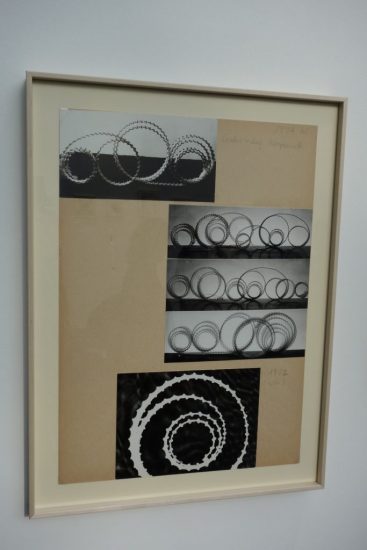 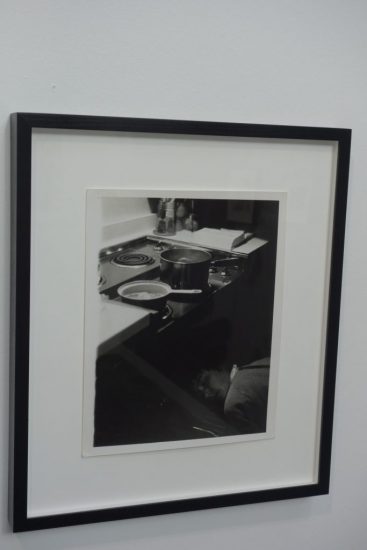 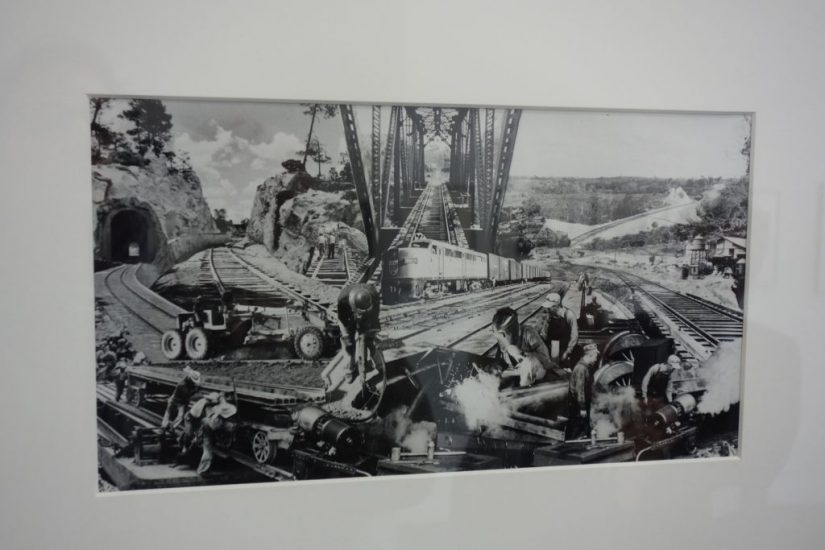 Galerie Nordenhake (here): This 1998 large format Polaroid diptych of teenage faces by Dawoud Bey powerfully pairs direct and indirect gazes. It captures the understated uncertainty of adolescence with grace and understanding, where tentative confidence turns to introspection in an instant. Priced at $20000.

Stephen Daiter Gallery (here): Aaron Siskind’s early works mounted on masonite or board (and therefore given an object quality) have a different artistic aesthetic than his standard prints. Not only does this 1949 work have a tactile richness and subtlety of tone, it has a presence on the wall that feels more imposing and physical. It’s hard to beat as an example of Abstract Expressionist photography. Priced at $25000.

Stephen Daiter Gallery (here): While William Eggleston’s classic green tile shower can’t be called anything like a new discovery, I still couldn’t help but be seduced by its grand use of color. Its bland frontal obviousness makes its nuanced color shading that much more enduringly impressive. Priced at $115000.

Stephen Daiter Gallery (here): This Harry Callahan study of grasses and greenery turns the insistent spikiness of the forms into something akin to an all-over etching. Up close, it’s an engrossing display of masterful texture, like a drenching Hiroshige rainstorm. Priced at $30000.

Patricia Conde Galería (here): This cut image collage is an unexpected new direction for Alejandro Cartagena. Its dislocations are jarringly sophisticated, breaking the found portrait into multiple misaligned pieces and using the negative space to expand the compositional options. Even the mat is cut to accommodate the jagged outline. Priced at $2800.

Yancey Richardson Gallery (here): Zanele Muholi’s ongoing series of self portraits has to be one of the most consistently successful self-portraiture projects of the past decade or two. This new image finds her largely covered, wrapped in textural black fabric and adorned by two silver cones, one of which takes the convenient form of an eye hole. Almost alien in its reformatting of the human body, her enclosure becomes a dark silhouette, her eye peeking out from the inside. Priced at $14000.

Gitterman Gallery (here): This sinuous female nude by František Drtikol doesn’t look like most of his art deco and avant garde compositions that use female bodies as central subjects. Here Drtikol gets in close, creating an intimate interaction between the model’s eyes and the lens. The light coming from the left creates bold areas of highlight and shadow that give the image its tonal subtleties, especially on the shining crest of her hair. Priced at €47000.

Galleria Enrico Astuni (here): This 1976 feminist performance piece by Suzanne Lacy finds the artist making a humorous yet incisive connection between her own body and the chicken she is eating at the kitchen table. Arms, legs, and breasts are matched up, her nude form set on equal footing with her dinner. The set of 4 modern prints is priced at €29000.

Goodman Gallery (here): These stark concrete shelves are actually miners bunks, as seen by David Goldblatt in 1965. Their unforgiving cramped geometries play out in crisp black and white, the creeping shadows and the peeling paint giving them a hollow echo. Seen in an oversized exhibition print made since 2009, priced at $18000.

Goodman Gallery (here): The more human side to David Goldblatt comes forward in this 1975 image from his Particulars series. The attentive details tell the personal story – the gripped hands, the thin work coat, the rolled up sleeves, the sewn button, and the mended rip. Already sold.

Rose Gallery (here): The acidic colors in this Jo Ann Callis image from the 1980s give it its off kilter mood. In between the seething orange footstool and the lilting yellow drapery that falls into blur in the background, a couple dances woodenly, as if the romance of their moment has somehow slipped away. Priced at €5500.

Augusta Edwards Fine Art (here): Tom Wood’s Looking for Love: Chelsea Reach series from the 1980s is a classic project documenting the awkward dance of attraction. Between the exchanged looks, the hesitant laughs, the spilled beers, and the illicit gropes, he captures a taxonomy of fleeting gestures and poses that men and women share (however reluctantly) in the close quarters of a bar. This image is a symphony in pink, the ritual application of lipstick both innocently aspirational and guardedly chin-out tough in one picture. Priced at €8000.

Galerie Anita Beckers (here): Christinae Feser’s exploration of the image/object dichotomy of photography continues to get more intricate and sophisticated. In this work, she uses conical paper structures, both cut from the print itself and laid on top and rephotographed, to cast shadows. But look closely and you’ll see that the light isn’t always coming from the same direction, leading the shadows to rotate around. This gives the whole composition a feeling of shivering, undulating movement. Priced at €14000.

Galerie Nikolaus Ruzicska (here): This new work from Axel Hütte finds spookiness in Vienna’s palace rooms. After printing this negative image on glass, with the white areas left empty, he then mounts a sheet of shiny stainless steel just millimeters behind, creating a tiny gap. The effect of this small distance is a noticeable shifting that occurs as you move around the print, almost like a daguerreotype. Priced at €36600.

Nap Gallery (here): You can almost feel the whip of the wind in this 1976 image from Miyako Ishiuchi (from her Yokosuka Story series). The grasses rustle and whisper in the breeze, the prominent grain in the enlarged print matching the gritty texture of the stalks. Priced at €40000.

Nap Gallery (here): While this late 1960s image from Hitomi Watanabe documents a student blockade at the University of Tokyo, the piled desks make a fascinating study of interlocked shapes. The student in the center literally has to climb up and over the physical barrier of education to join the protests. Priced at €4000.

ACB (here): This booth was a solo presentation of the rediscovered late 1960s/early 1970s work of Katalin Nádor. This set of images uses a coiled strip of wire to create a series of connected circular abstractions that spiral with looping energy. Priced at €4500.

Company Gallery (here): The ghost of Sylvia Plath lingers in the shadows of this 1974 head-in-the-oven work by Barbara Hammer. Dinner is simmering along just fine, but the rest of the bitingly feminist scene drops toward the exhaustedly macabre. Priced at $11000.

Charles Isaacs Photographs (here)/Grégory Leroy (here): This energetic Lola Álvarez Bravo montage from 1948 is filled with the bustle of train track construction. Jackhammers, welding torches, and other machines keep the process moving forward, the tracks themselves running away in all directions. Priced at $8500 (later print).

Parts 4 and 5 of this report can be found here and here.