Part 1 of the survey (here) explains the format used in the detailed slideshow below. It also offers some introductory thoughts on the fair as a whole. So while it is certainly possible to jump directly into any one of these individual reports and start digging, return to the beginning if you want a bit more context. 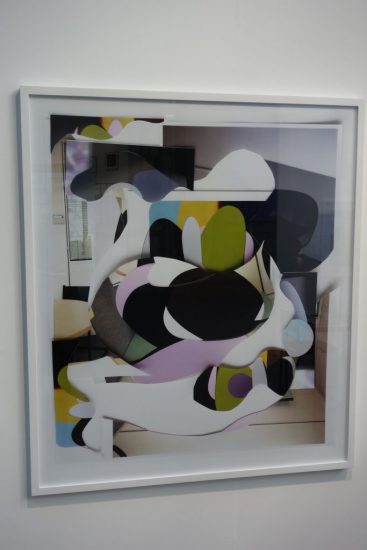 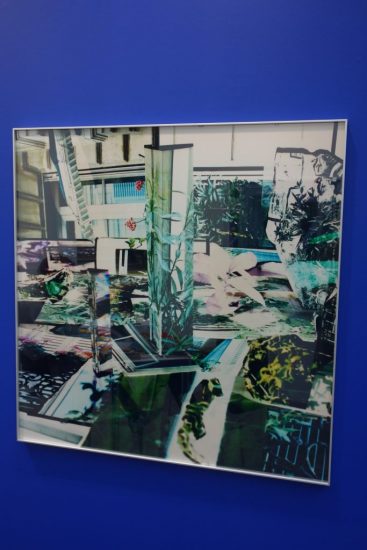 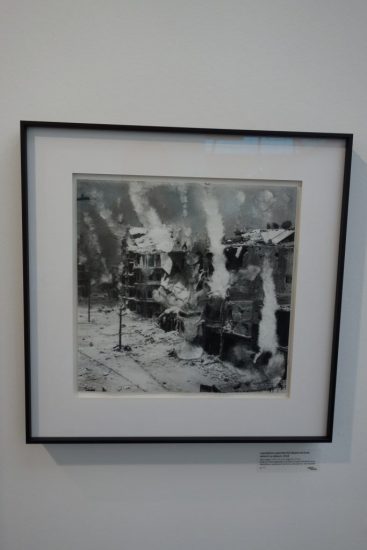 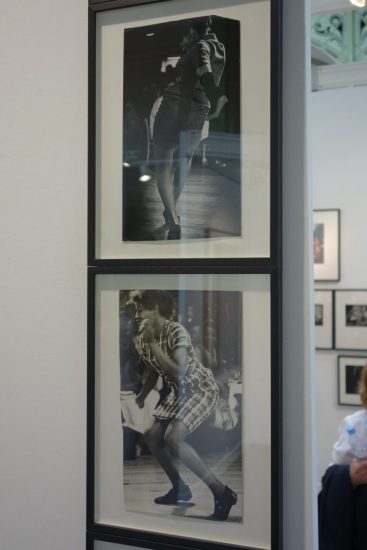 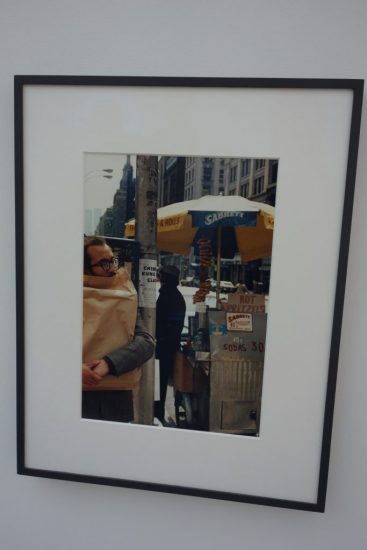 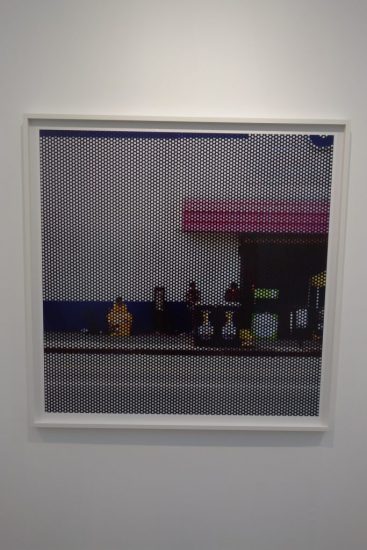 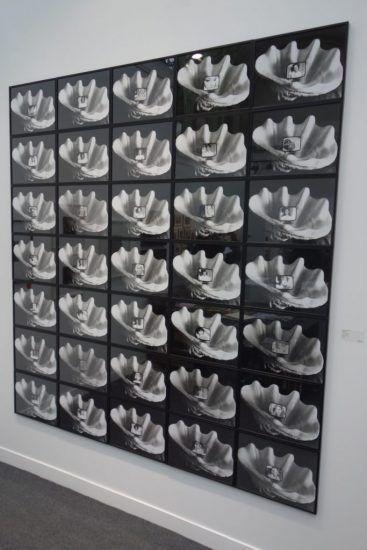 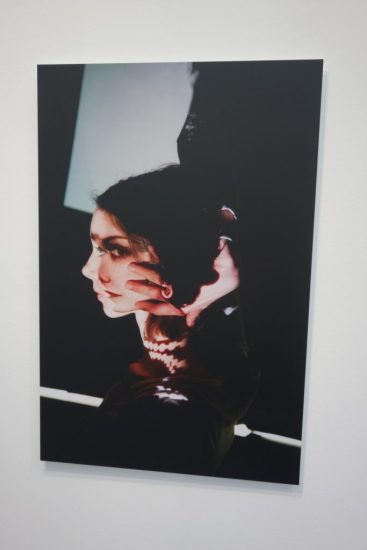 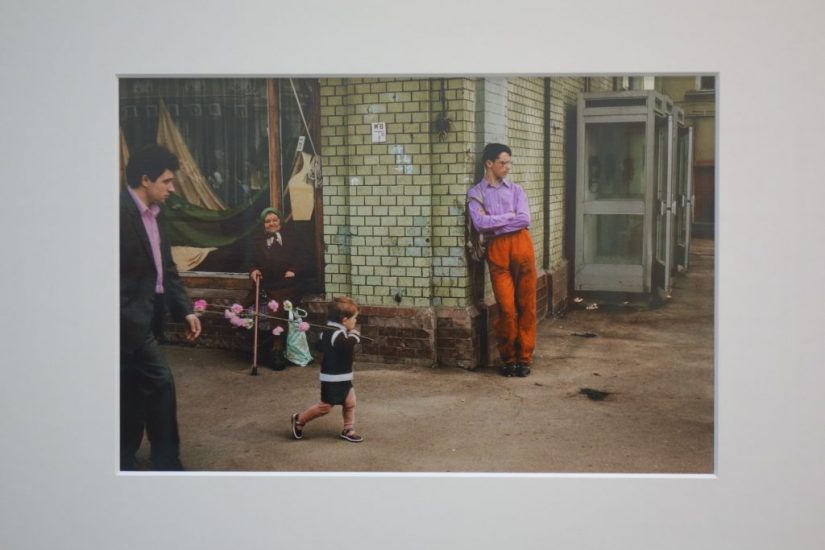 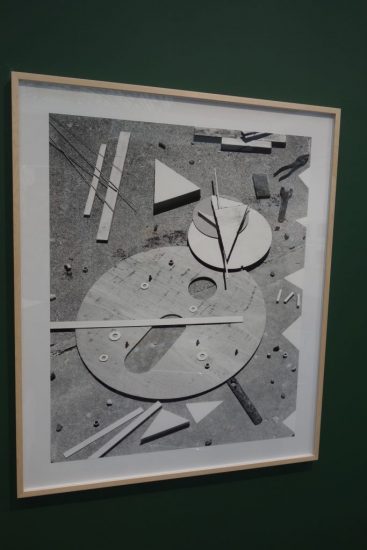 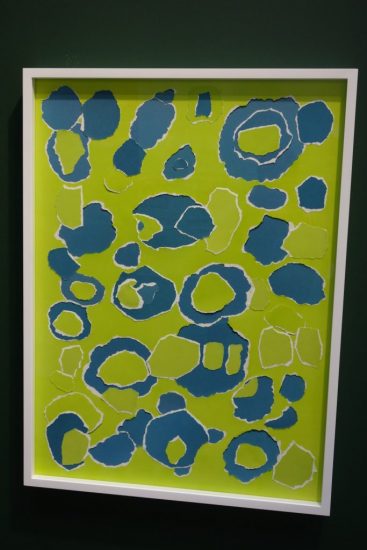 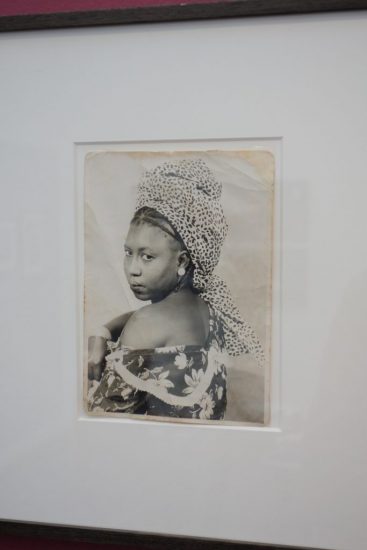 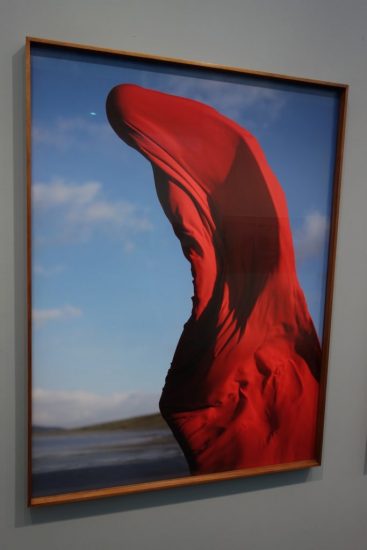 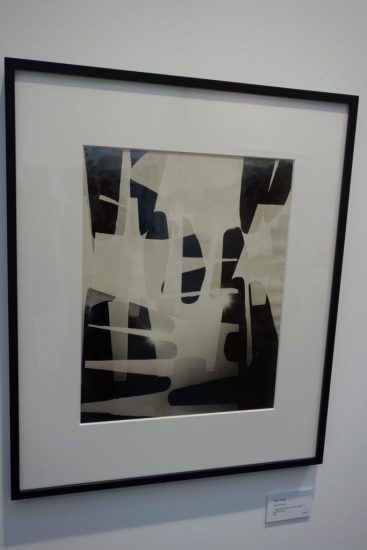 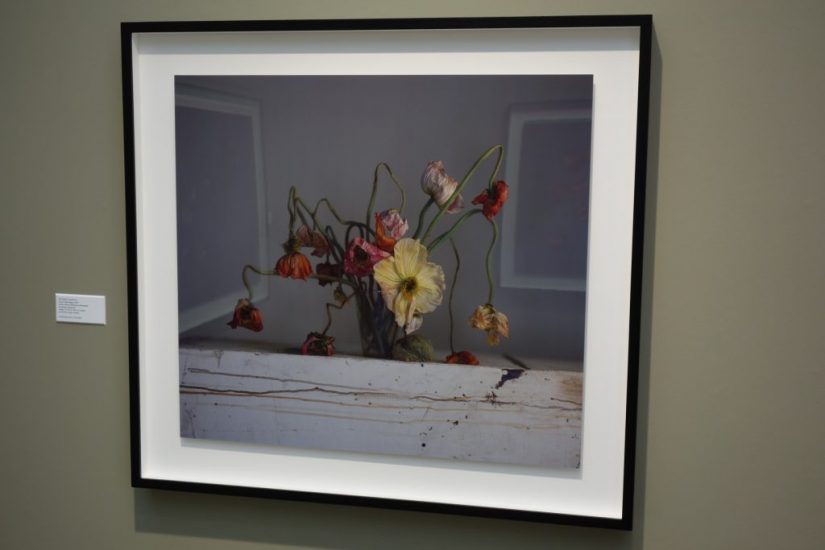 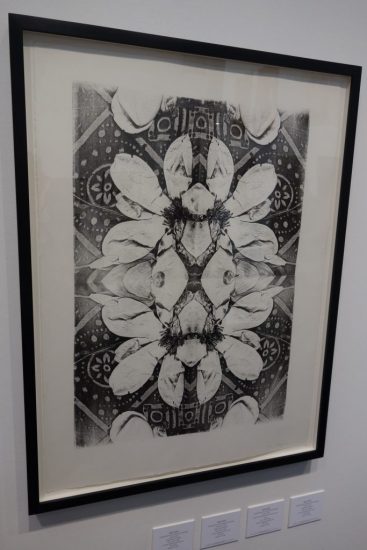 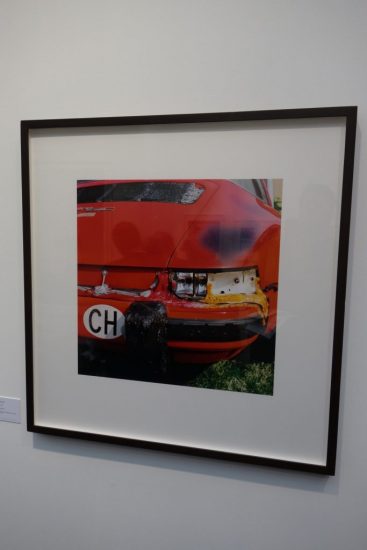 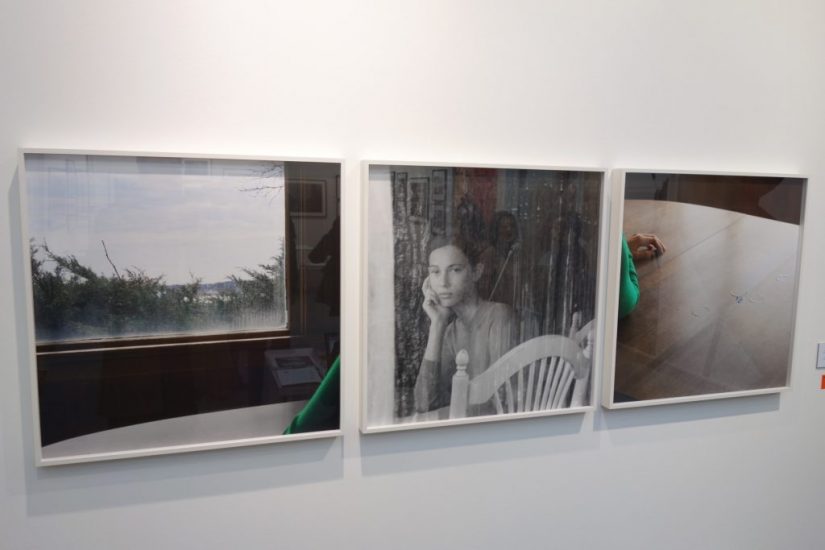 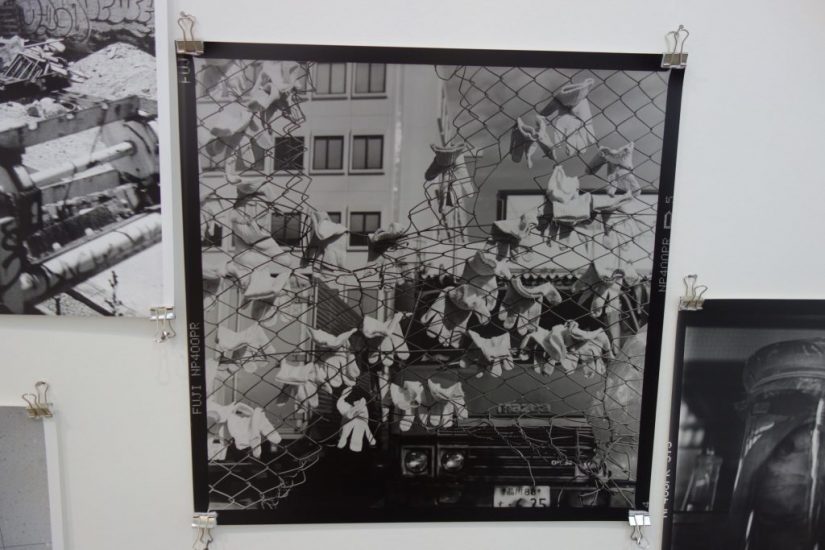 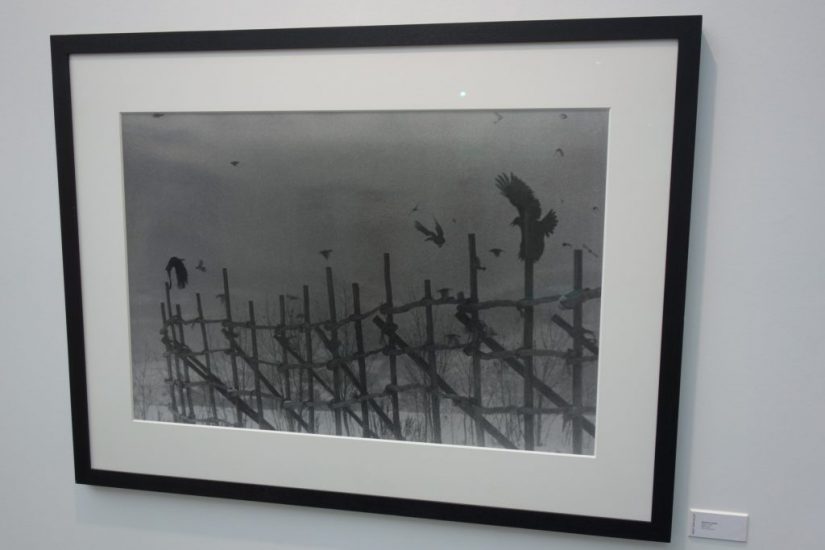 Galerie RX (here): This new work by Denis Darzacq embraces abstract rephotography, mixing swirls of color with fragments of interiors. The cutting and piling creates physical on-top and below relationships, further confusing our ability to unpack how things fit together. Priced at €8000.

BMW Residency: The iterative inversions in Baptiste Rabichon’s constructed images are puzzling and head spinning. Starting with images of flowers and plants on balconies and in windowboxes, some positive and others turned negative, he then prints the resulting pictures on paper and builds a dense physical installation, which he then rephotographs in negative tonalities. The double reversals are hard to follow, but the effects are complex and other worldly. Priced at €4000.

Galerie Binome (here): Lisa Sartorio’s black and white images of recent wars use sculptural surface texture to reinterpret the scenes. This picture shows us a bombed out street in Syria, but Sartorio’s physical interventions add another layer to the story. Printed on Japanese kozo paper, the fibers of the print were pulled away and deformed while still wet, creating ghosts that look like gently falling bombs or smoke trails. Priced at €3200.

Galerie Lumière des Roses (here): Photographs of people dancing don’t always have as much vitality as these 1960s Harlem images from Harvey Lloyd. Their energetic swaying movement, seen from ground level, is altogether contagious. A set of 6, and already sold.

Galerie Thomas Zander (here): The organization of this Helen Levitt image shows that street photography can be surprisingly structured. The two poles divide the space, squeezing the mustached man with the armload of packages into the far left, and leaving room for the kung fu poster and hot dog imagery to interact. It’s one of those moments that resolves for an instant, only to drift off a second or two later. Priced at €21500.

Galerie Thomas Zander (here): This screened image by Anthony Hernandez was actually taken through the perforated siding of a bus stop. The Ben Day dot effect is a little bit Roy Lichtenstein, albeit applied to the lo-rise street life of Los Angeles. Priced at €24000.

Priska Pasquer (here): Botticelli’s The Birth of Venus has been an inspiration for countless artists over the centuries, but Ulrike Rosenbach turns the woman-on-the-half-shell idea inside out in her smart re-interpretation. Beauty queens and clean cut movie stars like Doris Day perch on small TV screens in the grid of shells, each one a biting modern day embodiment of the idealized female. Priced at €53600.

Galerie du Jour – Agnès B (here): Harry Gruyaert is an unsung master of color, so it is no surprise that his images from 1980s Moscow would be full of pops of inspired color. In this picture, a string of pinks runs from one shirt to the flowers to another shirt, then turning to green as it travels from the drapery in the window to a shopping bag and on to the grimy brick wall, finally arriving at the punctuation mark of the orange pants. Priced at €2800 (modern print).

Galerie Xippas (here): This new black and white work by Matthew Porter revels in the precision of geometric forms. Nuts, washers, pebbles, dowels, and plywood shapes are strewn into an overlapped arrangement. Seen from above, they become flattened into Malevich-style abstraction. Priced at $7000.

Galerie Xippas (here): Vik Muniz continues his exploration of the image/object duality of photography in this recent work. Yellow-green and blue papers have been ripped into rough circles, the white edges showing through. Muniz has then layered the physical scraps on top of the rephotographed arrangement, creating an illusionistic interplay between 2D and 3D. Simple to think about, but hard to execute with such style. Price at $28000.

Magnin A (here): This vintage Seydou Keïta print from the mid 1950s is in rough condition, but the closer-in studio pose makes a visual connection back to the style of Mama Casset. Regardless of whether we can make a direct link of influence, it’s clear from this evidence that Keïta’s portraiture style was evolving over time. Priced at €8000.

Pace/MacGill Gallery (here): While Richard Learoyd has applied his high intensity looking to a number of still life objects, this is the first time he has made a sustained attempt to engage with floral bouquets. This image combines both live and dead/dying poppies, allowing the natural process of decay to create droops and crinkling dried petals. As matched by the drips on the rustic painted table edge below the blossoms, it is a study in gestural inward pull. Priced at $50000.

Steven Kasher Gallery (here): While Xerox and other photocopier-made imagery doesn’t always find its way to the hallowed halls of Paris Photo, I was pleased to see this 1975 Xerox effort from Joan Lyons make the trip as part of a vibrant solo presentation of her work. Flattened and mirrored into a symmetrical pattern, it takes the underlying textile and extends it into something far more explosive. Priced at €7300.

Galerie Springer Berlin (here): Arnold Odermatt’s car crash photographs from the 1970s and 1980s always feel fresh. While many were made in black and white, this work takes full advantage of the available color, the eye popping red/orange of the car decorated with the oozing melted yellow and black plastics of the headlights and bumpers. Priced at €6000.

Kuckei + Kuckei (here): The simultaneous photographic vision of Barbara Probst has always struck me as quietly brilliant (and underappreciated). This new work captures a single instant from three different perspectives, allowing us to look out, look in, and look down at the wet rings on the table all at once, splintering the decisive moment into a multitude of equally valid simultaneous alternatives. Priced at €21000.

The Third Gallery Aya (here): This arrangement of white work gloves stuck in bent chain link fence by Asako Narahashi reminded me of a branch of fluttering cherry blossoms in springtime, or perhaps a flock of white birds just after take off. Either way, it has a sense of embedded movement that makes the composition engagingly lively. Priced at €2500.

Robert Mann Gallery (here): This rare large scale print by Masahisa Fukase (from his iconic series Ravens) makes the most of its unusual size. The geometric patterns of the wooden fence become even more imposing when enlarged to this size, the flock of dark avian silhouettes even more ominous and threatening. Priced at $75000.