A few days before I left to make my annual trip to Paris Photo this year, someone asked me what I was hoping to get out of the journey, having made the same pilgrimage every year for many years now. The unspoken question that went along with this query was “surely it can’t be that different every time?”

My quick on-the-spot and unrehearsed answer was that I go to Paris Photo to see the work I don’t (and likely can’t) see in New York. And even though there is undeniably some similarity to the fair year in and year out, with largely the same crop of galleries often bringing work from stables of artists that don’t change markedly in the course of twelve months, there still isn’t any better place for a passionate photography enthusiast to catch up on what’s happening in the medium. There is always joy to be found in serendipitous discovery.

In prior years, I have taken on the challenge of selecting one image to discuss from each and every booth at the fair, and last year, I narrowed my search criteria to only female photographers, cutting a cross section of deserving work by women out from the larger flow (here, with some additional thoughts here). For many, this female-only slice of the fair touched a nerve and was a thought provoking eye opener, forcing some gallery owners to think more overtly about the gender balance of what they were showing and selling. (And as an aside, this approach seems to be popular, as this year the fair itself has created a path through the booths called Elles x Paris Photo, highlighting works by women photographers.)

With roughly 150 gallery booths and a handful of special exhibits to process (not including the photobooks, which for us are a separate effort), it isn’t unrealistic to estimate that there are easily between 3000 and 4000 photographic works to be seen at the fair (20-30 per booth on average as an educated guess). This year, I decided to impose a numerical constraint on my systematic wanderings, forcing myself to choose just 100 works to feature (and think about) from that vast pool of excellence.

My only hard and fast rule was not to select something I have seen recently in New York – this unfairly sidelines my friends from hometown galleries (whose work we feature on a regular basis), but hopefully broadens the scope of this summary to ensure that it doesn’t end up obviously repeating what we’ve already covered elsewhere.

As a practical matter, this summary is divided into five slideshows of image highlights, roughly organized by physical location in the Grand Palais. This first segment starts with the booths found in the center of the fair (from the perspective of standing at the main entrance) and each subsequent report (over the next few days) will follow my circuitous path through the aisles, finishing up the first section and then alternately moving to the left and right. The structure for the information remains the same as in years past – gallery names/links are followed by notes and comments on the particular work featured, including the artist/photographer name and the price of the work (typically in euros or dollars), unless the work is already sold.

While imposing a strict numerical limit certainly means that many deserving artists and galleries won’t be featured in this year’s summary, the rigor of being forced to make hard trade-offs lines up well with the actual realities of being a collector – one inevitably has far too many potential favorites and art crushes and not nearly enough money to go around. So with that in mind, let the sifting and sorting begin. 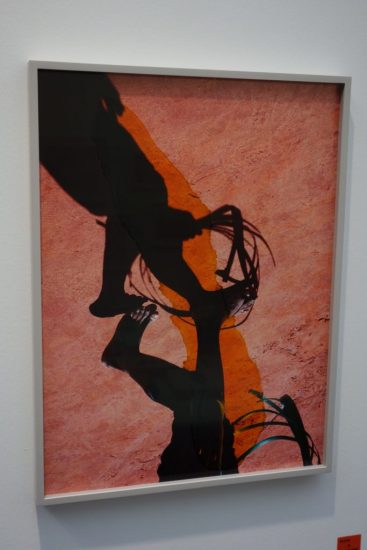 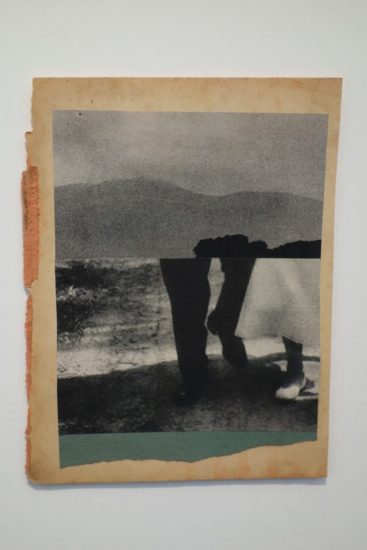 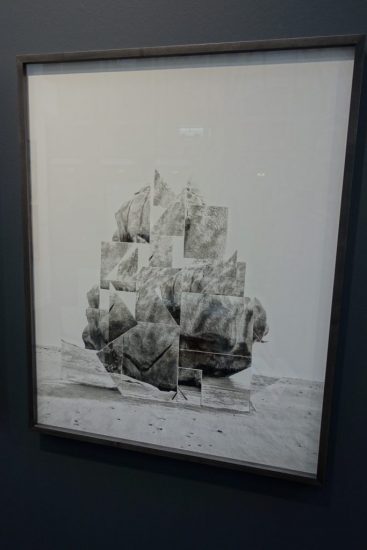 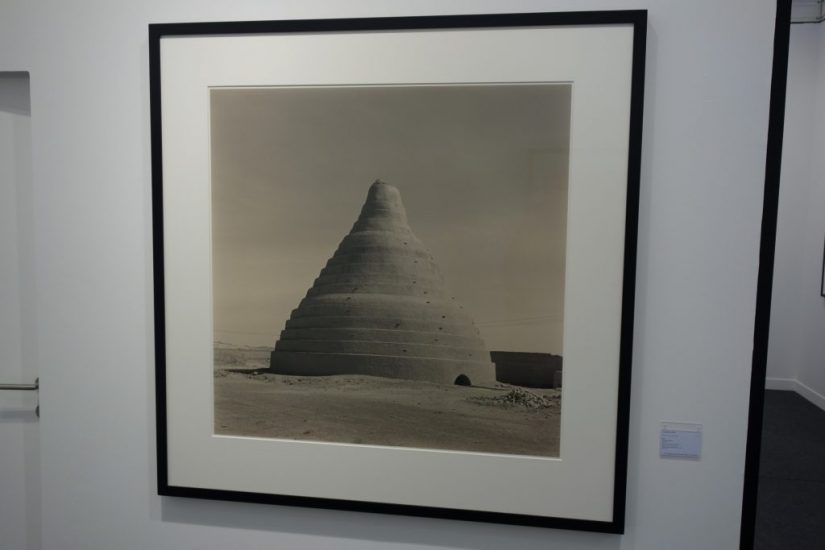 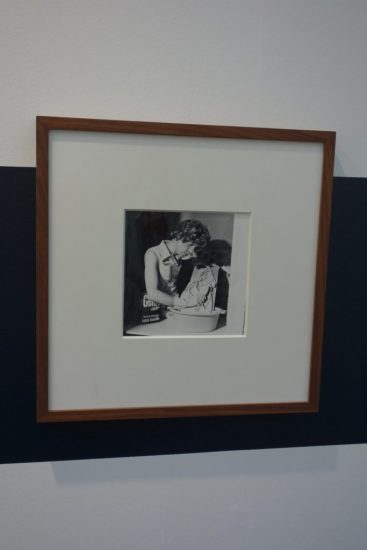 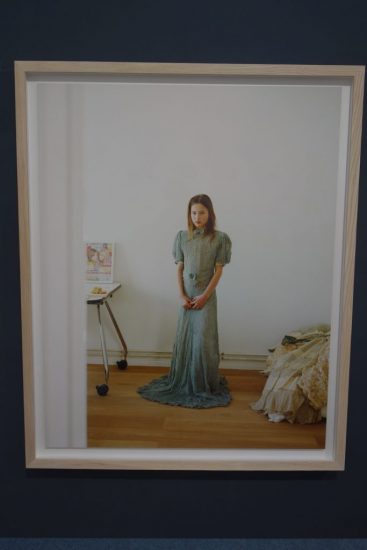 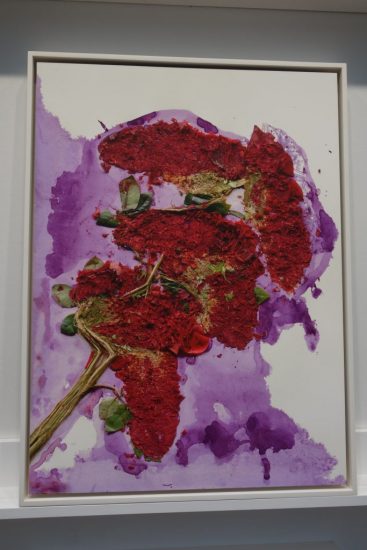 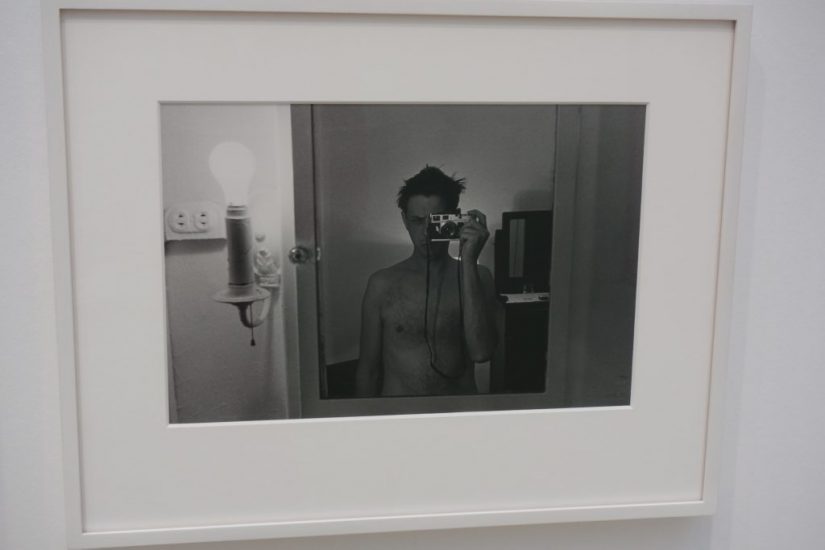 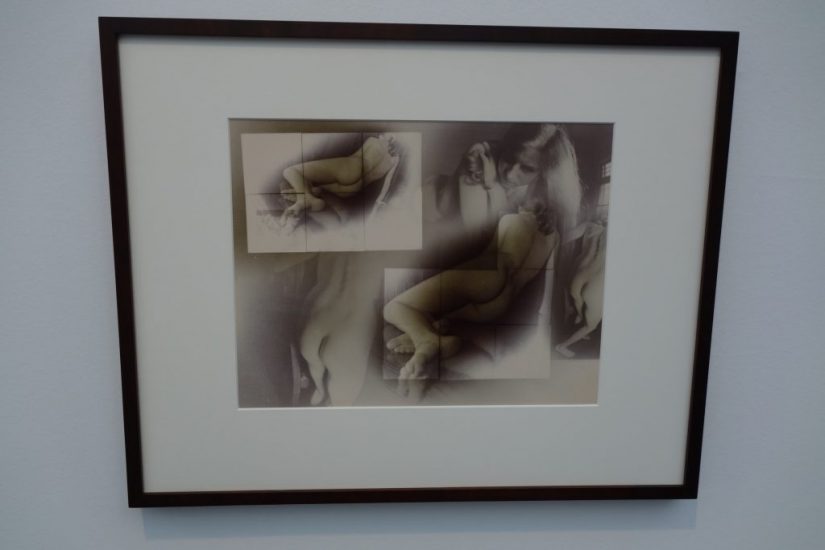 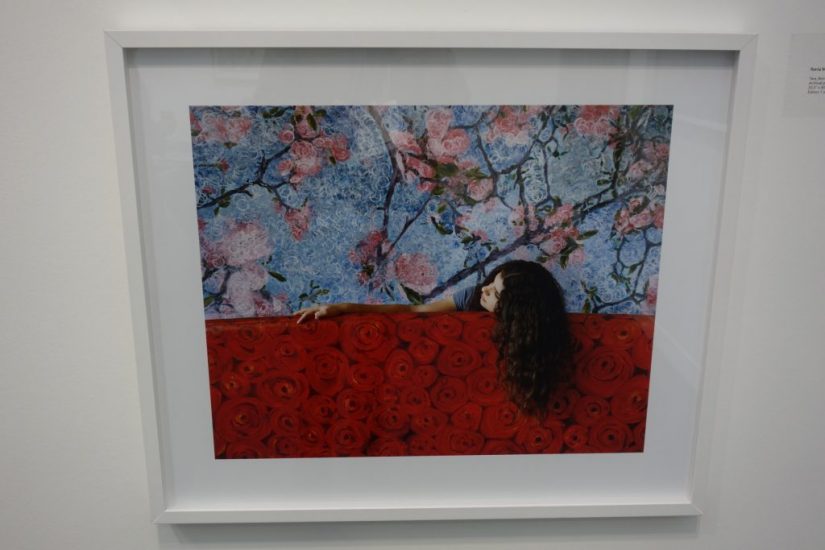 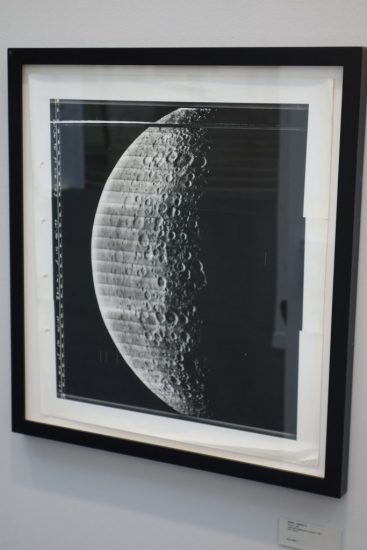 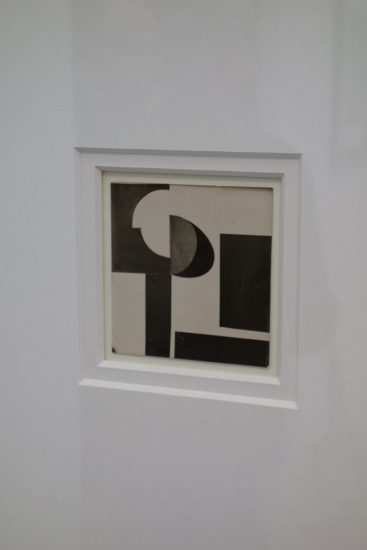 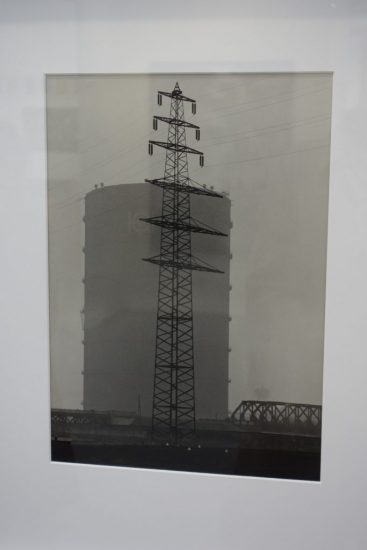 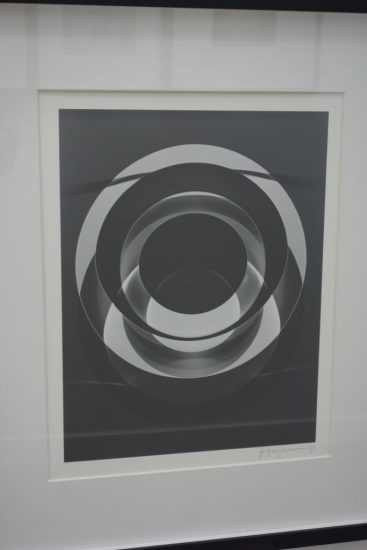 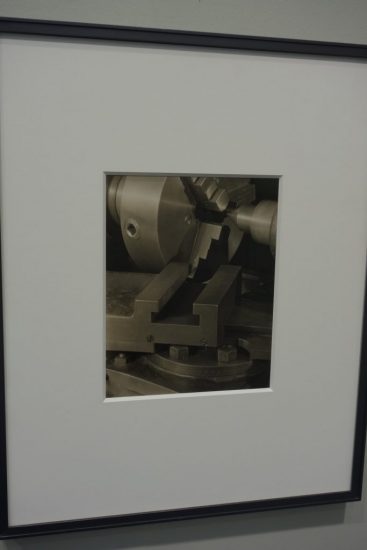 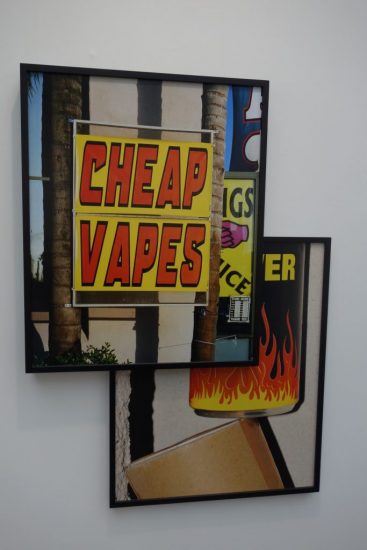 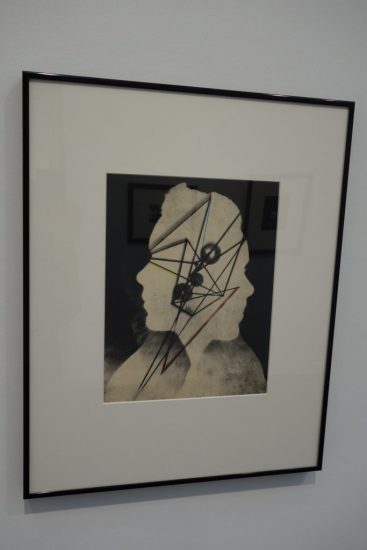 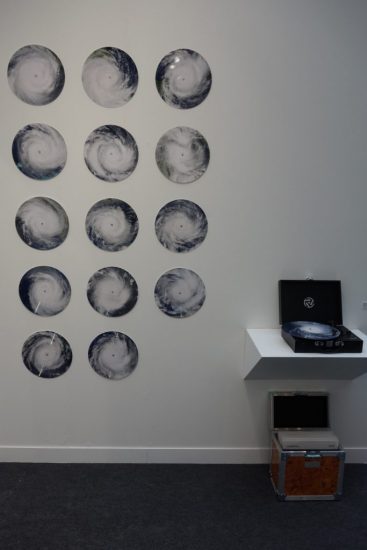 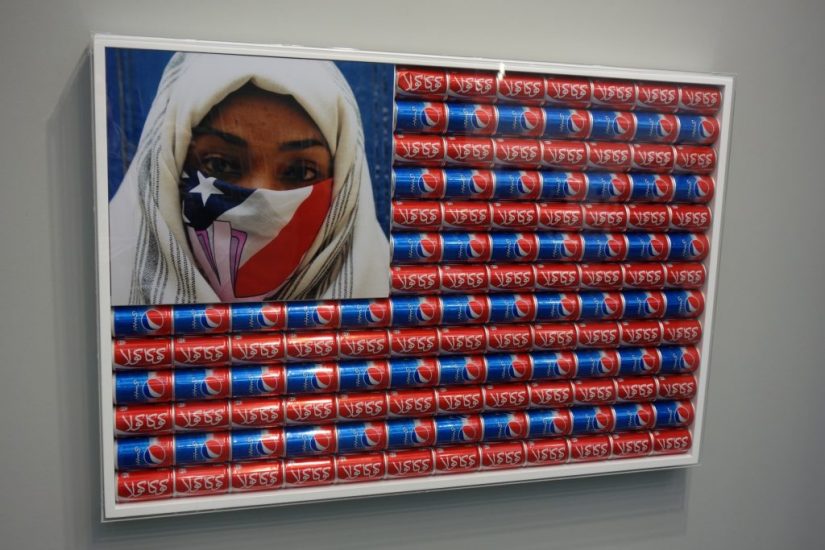 Stevenson Gallery (here): Viviane Sassen has spent the past few years experimenting with various kinds of overpainting, using the physicality of the gestures to interrupt her already disorienting photographs. This new work successfully experiments with colored ink, the orange stain creeping across the complicated inverted shadow/body composition, echoing the tone of the ground. Priced at €14000.

Galerie Les Filles du Calvaire (here): Katrien De Blauwer’s collages consistently do so much with so little. Often constructed from just a fragment of one image and a backdrop of old paper or a painted mark, they somehow find grace and nuance in a limited number of compositional variables. This work combines two images and two colored papers, creating a sense of romance and melancholy, perhaps fleeting or unfulfilled. Priced at €1200.

Galerie Les Filles du Calvaire (here): At first glance, I assumed this image by Noémie Goudal was made using digital tiling, fragmenting the rock form into geometric shards using software. But up close, it becomes clear that the shifting mass was astonishingly constructed with actual mirrors out in the landscape, making it’s dense aggregation of mismatched planes infinitely more fascinating and perplexing. Priced at €8000.

Galerie Karsten Greve (here): This booth is devoted to the work of Lynn Davis and her serene large scale images of architectural and natural wonders. This meditative ice house from Iran tapers gently upward, its layered surface captured in tactile warm tones. Priced at €26000.

Galerie Christophe Gaillard (here): This booth contains a solo presentation of Michel Journiac’s 1974 project 24 Hours in the Life of an Ordinary Woman. In it, Journiac dresses in women’s clothes and performs a variety of mundane domestic tasks, from making dinner, cleaning up, and washing clothes, to putting on makeup and lying in bed. Even when the scenes are staged with a dose of overt awareness, they smartly invert and undermine gender roles. Individual prints priced at €9000.

Loock Galerie (here): Alec Soth’s newest project focuses on portraiture, making pictures of sitters in their home environments. This image recalls the in-between awkwardness of some of Rineke Dijkstra’s best photographs, where tentative uncertainty and confident beauty struggle for dominance. The gauzy textures of the dress, the natural light, and the roominess of the space around her add to the restrained wonder. Priced at $20000.

Galerie Nathalie Obadia (here): This large scale image by Luc Delahaye turns a wearying taxi ride into a pieta. The dramatic pose of the boy is something out of a religious painting, with the arms shielding the eyes, the legs crossed and twisted, and the mother’s hands supporting him. Her downcast expression finishes the solitary scene, with the dusty windows and surrounding seats providing the compositional backdrop. Priced at €43000.

Fraenkel Gallery (here): Adam Fuss’ new flower images were made by sending roses through an etching press that flattens them into piles of ground pigment. Scanned and then printed on gessoed aluminum, the works have the texture of antique specimen albums or watercolors, the watery squished tones spreading beneath the tactile blossoms. Priced at $20000.

Fraenkel Gallery (here): The grouchy offhanded casualness of this early (1965) Lee Friedlander self-portrait provides a confrontational contrast to its careful composition. A double layer of mirrors interrupts the flattened space, while the light bulb and electrical socket unbalance the frame, the whole image coming together in a strange kind of harmony. A 1970s print, priced at $16000.

Taka Ishii Gallery (here): This 1967 female nude study by Kunié Sugiura is more layered than most multiple exposure compositions. Not only do the bodies overlap and intertwine, the tiling effect and flared shadows break the repetitions into discrete pieces. Priced at €12400.

Galerie Tanit (here): This image by Rania Matar is filled with relaxed glamour. Between the lushly painted floral surfaces that bisect the frame, the loose cascade of hair, and the extended arm, it has an enchanted fairy tale feel. Priced at €3900.

Daniel Blau (here): This technical image from NASA’s Orbiter V mission in 1967 constructs the surface of the moon from a series of photo strips. Each perfectly aligned slice is filled with pock marks and craters, the reassembled whole shaded from light to dark. Both artifact and artwork, it represents can-do scientific problem solving at its most quietly inspirational. Priced at €7000.

Galerie Kicken Berlin (here): This 1925 carton abstraction by Jaroslav Rössler is all hard edged geometries. The high contrast black and white shapes are organized in opposing echoes, creating movement and connection across the composition. Seemingly simple, but rich in sophistication. Priced at €60000.

Galerie Kicken Berlin (here): Choked in murky grey mist, this Albert Renger-Patzsch industrial study feels thick and dense. Set against the imposing bulk of a chemical tank, the single electrical tower is featured like a specimen tree, creating a three-way tonal harmony between light, middle, and dark. Priced at €88000.

Galerie Kicken Berlin (here): While the nested circular forms in this Floris Neusüss photogram are altogether mesmerizing, the “how he did it” questions of this image have got me wondering. Straight bright circles are one thing, but these interlocked arcs with sliced areas of opposing tones are quite another. Priced at €4500.

Howard Greenberg Gallery (here): This 1923 Modernist view of the machine shop at the Akeley Camera Company by Paul Strand is all crisp edges and burnished surfaces. The ability to make metal gleam and glow, while infusing the mundane machinery with a sense of industrial romance, is what makes photographs like this one so durbaly sublime. Priced at €78800.

Klemm’s (here): At first glance, I thought this pairing of images by Viktoria Binschtok was simply about overlapping or contemporary image overload, showing us the visual conflicts that can arise between adjacent pictures. But after a few moments, the interrelationships start to present themselves – the vertical alignment of the darks and lights as well as the palm tree and can edge, the echo (both in color and activity) of fire and vaping, and the play of the fragmented graphic lettering. Suddenly, the seemingly random is altogether smartly ordered. Priced at €40000.

Bruce Silverstein Gallery (here): This György Kepes image from the late 1930s is brimming with complexity. A doubled silhouette creates an interior space where geometric circles and lines form a nest of angles, and then those darting rays are further enhanced by red, yellow, and blue gouache. It’s like a mind on overdrive, churning with dynamic energy. Already sold.

Bruce Silverstein Gallery (here): In the race to extend photographic printing onto ever more arcane surfaces, Mishka Henner’s new project Landfall may take the prize. Henner has printed color images of 15 swirling hurricanes on the surfaces of vinyl records, each specific American storm accompanied by its own sounds. The boxed set comes with its own turntable and padded carrying case, but the real magic happens when the storms get “played”, their natural rotation mimicked by the spinning record, the howling winds emanating from the setup like mournful cries. Priced at $25000.

Yossi Milo Gallery (here): This early work by Hassan Hajjaj finds him recreating the American flag with soda cans and a photograph. Between the arabic writing on the Coke and Pepsi cans, the covered face, and the stars and stripes veil, he’s transformed the national symbol into an unexpected twist on aspirational association. Priced at €18000.